Waiting for Nothing (More): Tom Kromer’s Singular (and Single) Masterpiece 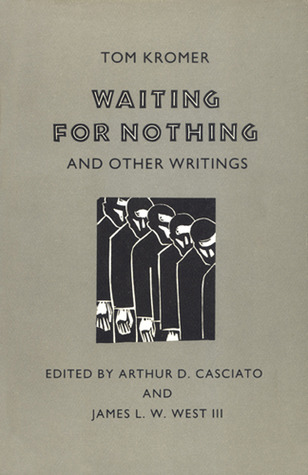 Waiting for Nothing by Tom Kromer (image courtesy Goodreads)

I realize I have been remiss.

Despite two updates to my 2014 reading list (see here and here) I have still more books that I’ve added. So once I finish this essay on a rather singular work of literature from The Great Depression, I suppose it’s incumbent upon me to write a short piece to still further update my reading list.

But writing about the books themselves is ever so much more enjoyable, so let’s get to that first, shall we?

Waiting for Nothing by Tom Kromer is one of those books that rattles around in the halls of academe periodically as a “lost classic.” I first encountered it in my first full time college teaching job back in 1987 at Salem College. A now “lost and by the wind grieved” colleague, Pete Jordan, asked me if I were familiar with the work. When I told him no, he thrust a copy into my hands and told me in no uncertain terms that it was a book I should know.

I took it home and read it in an evening. (That’s not a prodigious feat – the book is more a novella than a novel and the edition I reread for this essay, a very nice remounting by the University of Georgia Press, logs in at only 130 pages). It’s an alternately engrossing and wrenching narrative based on Kromer’s time as a “stiff” (the term refers to the many hobos who spent their time drifting from town to city across the country looking for work during the depths of the economic crisis in the early 1930’s).

Given their similar lengths and diametrically opposed subject matter, Waiting for Nothing might be considered The Great Gatsby’s star-crossed twin. While Gatsby explores the evils and perils of wealth and the “foul dust,” as Fitzgerald terms it, that floats in its wake, Waiting for Nothing explores the worst of that “foul dust” – the disenfranchisement and dislocation of many, many thousands of men and women in the wake of an economy crashed by Wall Street speculation run amok.

The novel is unrelenting in its depressing details. Kromer describes the life of a young man driven to become a hobo, riding the rails, “dinging” (asking) for small change from “guys with plenty of dough” (usually unsuccessfully), and engaged in the perpetual quest of the out-of-work wanderer of this depressed and depressing period of American history: “three hots and a flop.” That term, which refers to three decent meals and a bed for the night, was the original title of Kromer’s work. The more poetic “waiting for nothing” comes from the last chapter of the book and describes men waiting unsuccessfully for a chance at a bed in one of the many missions that offered lice infested cots, stale bread, and rusty stew to those willing to endure hours long evangelical church services.

The world Kromer depicts is violent (the casual brutality of both police and “railroad bulls” whose primary aim was to keep the wanderers moving to the next place is an ever-present danger), tawdry (at one point the main character accepts the proposition of a gay man in order to have a decent meal and a warm bed for the night; on another occasion he gives a young woman just beginning a career in prostitution lessons in how to “penny up” in order to get bologna butts, onions, and stale bread in order to make a filling meal, then accepts her invitation to cohabit “until the room rent runs out”) and cynical (the missions hold desperate men hostage and refuse them food and shelter if they will not submit to their proselytizing, for example; at other times Kromer describes warehouses full of fresh foods that owners let sit and rot in order to drive up prices while those who helped harvest them often go hungry).

Kromer depicts all this in a style that both suits the material and seems appropriate given the time of Waiting for Nothing‘s publication (the book originally appeared from Alfred Knopf in 1935). It owes something to the naturalism of Crane – and especially Dreiser, who was an admirer of the work (he wrote an introduction for the British edition – that edition, by the way, deleted the gay prostitution section mentioned above in early printings but eventually restored it). Mostly, however, Kromer’s style can be likened to that of the hard-boiled school: reading Waiting for Nothing is more like reading James M. Cain or Raymond Chandler than anything else. The tough guy with tenderness hidden inside is reminiscent of Frank Chambers, the main character in Cain’s masterpiece The Postman Always Rings Twice.

Why Kromer never completed another novel is a matter of widely debated – and highly debatable – conjecture. He did develop a serious case of tuberculosis not long after Waiting for Nothing was published, and he eventually became an invalid for the rest of his life (though he lived 34 years after this novel appeared, and while his health may have been poor, it seems unlikely he would not have been well enough to work all that time). He did complete part of another book on a coal miners’ strike (Kromer grew up in West Virginia and his grandfather and father worked in the mines) and he proposed a book on “mountain people” to Knopf that his editors discouraged. But other than two or three short stories and a half dozen book reviews, Kromer wrote no more.

Health is certainly a feasible explanation for this work being Kromer’s only book. Others have noted that all of Kromer’s work is “of a piece,” and that perhaps Waiting for Nothing was Kromer’s To Kill a Mockingbird. Perhaps, like Harper Lee, Kromer’s novel was the author’s definitive statement on the subject held most dear and, once made, the writer felt there was nothing more to say.

Waiting for Nothing is a powerful, worthy chronicle of the dark side of The Great Depression. Kromer’s work has stood the test of time and is, after the Steinbeck chef d’oeuvre The Grapes of Wrath, perhaps the most honest and unsettling depiction of that difficult time in American history. It deserves a wider audience.