Where is Governor Nixon in the Ferguson nightmare?

When government won’t govern, the people need to lead 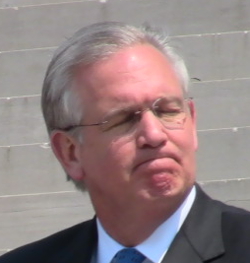 Step up or step out, Governor (so-called).

While Ferguson Situation Goes Out Of Control, Missouri Governor Tweets About School Board Meeting

Oh, but aside from tweeting about 4H and the school board, Governor #WhereisJayNixon did make time Tuesday night, with prepared comments, to address a community meeting (see link in the above referenced article. How very gubernatorial of him. Okay, so he requested a DOJ investigation. That’s barely doing the job. Where is the leadership? Unless by leadership we’re to understand his hands-off approach to the St. Louis County PD as tacit approval, that is.

Here’s what I want to know.

Why, when a large group of people with an obvious grievance peacefully takes to the streets is the first response a show of force, tear gas, rubber bullets, APC’s, and riot gear? I’m not talking about the riots. Those need to be contained, absolutely. But why is the response to peaceful assembly brute force?

Here’s what I suggest.

A tragic event happens. I think, until the smoke clears and the investigations are done, we can at least agree that a death is tragic, regardless of the details.

For reasons as yet unbeknownst to us, and ill understood once known, the people, who alone have the prerogative to decide whether or not they are oppressed, take to the streets. I’m not talking about a small army of professional, educated civil leaders, attorneys, or even just college students in Poli Sci. I’m talking about Everyman. The so-called unwashed masses. Today’s analog to those in our early history who, feeling the boot of oppression on their neck, did whatever it took to throw that boot off, even if it mean rioting, looting, beatings, tarring and feathering, or tearing some local official’s home down around his ears.

To wit, perhaps these aren’t the most experienced citizens when it comes to civic engagement. Maybe their education doesn’t meet up to your high expectations (for a host of reasons that are likely part and parcel with their oppression, real or otherwise). Maybe their clothes don’t meet with your personal style choices. Maybe you don’t like their vernacular. That’s okay. This isn’t a fashion show or a talent show. It’s a group of people who have fucking had enough already.

These people have taken to the streets. Maybe they are unaware of the nuances of civil disobedience. Maybe they don’t have a sophisticated understanding of just what is and what isn’t permissible in the context of legitimate protest. They are there, in the street, blocking it off, pissed as hell, cussing up a storm, and demanding justice.

Why show up in force? Send in one car, marked differently from the rest, indicating that it’s a civil negotiator. Two folks in cheap suits get out and wave at the crowd. Once goes to the trunk, and instead of pulling out riot gear and tear gas, she pulls out a small folding table, some folding chairs. The other one retrieves a cooler filled with nice, cold water and a sleeve of plastic cups from the back seat.

They advance halfway to the crowd and call out for three or four of them to join them at the negotiating table. They meet. They offer a cool drink of water. They ask if they may record the proceedings, and offer a copy of the interview back on USB when they’re done. They politely offer to hear the grievances and in return only wish to be given the opportunity to quickly coach the “representatives” on methods of protest that won’t get tear gas and rubber bullets fired at them. They invite them, and by extension, the whole crowd, to a public town hall meeting to address the issue. They offer to put the group in touch with legal aid so they may have appropriate representation.

They do what they can to cool things off. Without intimidation. Without a show of force. Without hostility. They invite the aggrieved to become active participants in the system instead of victims of it. They coach where educators and peers and other leaders have left off.

If, after that, the crowd still won’t disperse, to the extent there are safer, more peaceful approaches available, those should be used. Are the protesters blocking off a street? Okay, is there a convenient way around them? Let them know they may have a temporary waiver of such permits as are needed so long as they agree to let emergency response vehicles through should there be a need. Then put up some city barricades and give them time to cool off.

If things spill over? Then yes, maybe it’s time for some crowd control. Send in the wagons and announce that peaceful, unresistant protesters will be given the opportunity to be arrested peacefully. If things get heated beyond that? Well, tear gas, sonic weapons, and riot gear do have a place. I would just think it’s a place of last resort.

And how much would all this cost the taxpayer? You tell me. Tell me how much more expensive a beater of a county car, two cheap suits, some lawn furniture, a cooler of water, and some civic engagement would be compared to all of the gear, the vehicles, the weaponry, the militarization, and the ensuing civil unrest would be.

If this is a stinker of an idea, I’m okay with that. Let me know. Just be sure to show up with a better idea first. Surely something has to be better than this.

Just by the way, Governor Nixon. Ideas like this, as well as appropriate action, should be emanating from your office daily, not tweets about 4H meetings.