Is it time for Justice Ginsburg to retire?

Is going strong, going long good for the country? 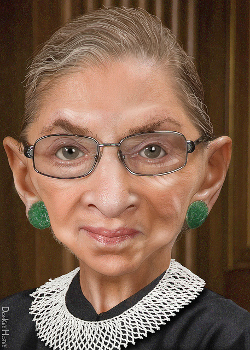 Having just read this article from the Washington Examiner, I find myself a bit perplexed and asking not only whether Justice Ginsburg should retire, but why won’t she of her own accord?

“I will do this job as long as I can do it full-steam,” Ginsburg said. “When I feel myself slipping, when I can no longer think as sharply, write as quickly — that will be the time for me to leave the court.”

The article concludes, and fairly at that:

The nightmare scenario for liberal court watchers would be a replay of 1968, in which a liberal justice, Ginsburg, dies or is forced to retire under a Republican Senate and president. If this occurs, the court’s swing vote could move one member to the right, from the unpredictable Justice Anthony Kennedy to Chief Justice John Roberts, who is conservative. A six-member conservative majority would thus be cemented for decades to come, ushering in a dark age of Borkian proportions in the minds of liberals.

“If a Republican president selects Ginsburg’s replacement, that justice easily could be the fifth vote needed to allow the government to prohibit all abortion,” Chemerinsky notes darkly.

How can I not wonder about her reasons? She’s about as Washington insider as a Washington insider can be. She’s been a sane dissenting voice in many a 5-4 decision that runs counter to her sense of jurisprudence. Surely she has to see the political realities surrounding the combination of her advanced years, failing health, and the political dynamics of the nation’s capital. If it’s just about doing it for life, so long as her wits are about her, without regard for the effect on justice, is it just ego then? Or is it possible that, with all the behind-closed-doors discussions to which we’ll never be privy, but in which she has been a key player, she actually has faith that a court stacked by Republicans will still render just decisions on a 6-3 basis, and that’s just what the country should and will have for decades to come?

Is there another angle here I’m just not seeing?