If there’s class warfare, us working SOBs aren’t the ones who started it. 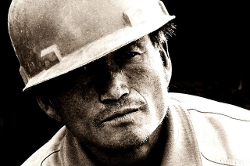 Dani Rodrick has an excellent piece over at Project Syndicate.

“Schwarzman acts as if “he’s beset by a meddlesome, tax-happy government and a whiny, envious populace.” He has suggested that “it might be good to raise income taxes on the poor so they had ‘skin in the game,’ and that proposals to repeal the carried-interest tax loophole – from which he personally benefits – were akin to the German invasion of Poland.” Other examples from Surowiecki: “the venture capitalist Tom Perkins and Kenneth Langone, the co-founder of Home Depot, both compared populist attacks on the wealthy to the Nazis’ attacks on the Jews.””

Skin in the game? Pound for pound, the poor and working class have way more skin in the game. The income taxes we do have to pay (for those that come up getting anything less than a 100% tax refund) are a greater percentage of taxable income. We don’t have the wealth to afford all the tax cheats the wealthy avail themselves of. Sales taxes and sin taxes hit us significantly harder. Same with gas taxes and pretty much any kind of usage tax. Then, to top it all off, when the rich decide it’s time for war, it’s the same now as it was up to and during the revolution…the rich demand war, and it’s the poor, underclass who put their skin in the game, all of it, all the way into the game.

Fuck those guys. As long as we’re playing a nasty round of Let’s Godwin the Argument, let’s go for broke. Taking a page from Hitler, I would generously support a program where these rich, entitlement-minded assholes are given a one-way ticket to the destination of their choice, never to return, and they can take their corporate charters with ’em. The vacuum they’d leave behind would be filled with other entrepreneurial and hard-working Americans. May they never make another dime off us.

More seriously, as Don Marquis suggested, “When a man tells you that he got rich through hard work, ask him: ‘Whose?'”