The Venereal Game: or, you don’t have a dirty mind, do you…?

James Lipton’s book on venery is about as much fun as one can have with words. 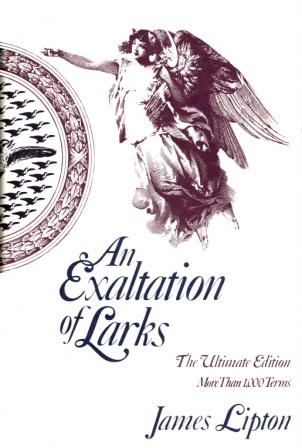 An Exaltation of Larks or, The Venereal Game by James Lipton

I’m back to the 2014 reading list with a book I picked up at my favorite used book shop – this one about as much fun as one can have with words. The book is called An Exaltation of Larks, or The Venereal Game and it’s written by James Lipton – yep, the same James Lipton who was the longtime dean of the Actors Studio Drama School at Pace University and host of Bravo’s fascinating Inside the Actors Studio.

While this book is indeed about venery, it’s the second definition at the link that fits Lipton’s work, not the first. Certainly there’s indulgence bordering on the decadent, but it’s overwhelmingly of the mental rather than physical sort – though for those of you whose minds drift in those directions, there’s enough titillation to make even the flashing of wit that pervades this work – an excitement of thinkers.

Venery, for those who have refused to hypertext, in that second definition means “animals that are hunted; game.” The derivation of the word is given as follows:

(The other definition of the word, from whence we get the definition that makes junior high aged boys (and girls) snigger, comes from around the same time period – but derives from Venus, goddess of love.)

But venery, as first compiled in about the middle of the 15th century, came from collective nouns used for describing  groups of game animals. In those days when boys were trained to become gentlemen, one’s knowledge of  language  (especially knowledge of jargon of areas such as heraldry and the hunt) was a way of marking oneself as such. The first genuine compilation of such terms was the Egerton Manuscript from 1450. The first printed book (and one of the first ten printed in England) was The Book of St. Albans. That work gives us many of the collective terms we now use to refer to groups of animals:

a pride of lions; a gaggle of geese; a school of fish (actually likely a corruption of “a shoal of fish’)

Then there are less well known, equally interesting collectives that Lipton notes:

a leap of leopards; a cowardice of curs; a labor of moles;

And a favorite of mine, for obvious reasons for those who know me:

a hover of trout

Lipton notes that while these terms for groups of animals are the most prevalent uses of collectives, a significant number of terms refer to groups of persons. Hence we also get:

a school of clerks (remember the “Clerk of Oxenforde” from Chaucer); a diligence of messengers; a sentence of judges

Some have to be the playfulness of the authors at work:

a draught of bottlers; an impatience of wives; a drift of fishermen

And this is where Lipton draws us into “the venereal game”: he offers us a list of terms that he and friends have coined. In the spirit of the authors of The Book of  St. Albans, Lipton and company have decided that whimsy – and a touch of poetry – should be the distinguishing characteristics of a good term of venery. Thus we get layful groupings such as these:

a flush of plumbers; a wince of dentists; a wrangle of philosophers

And possibly my favorite:

an odium of politicians

Lipton closes the book with a list of terms offered to him by readers of the first edition of his book. They show that in every walk of life, in nearly every profession, there are those who see the charm in language. Thus we get:

a rash of dermatologists; a pan of reviewers; a scoop of reporters; a riot of comedians

As you’ve guessed by now, it’s a delight of a book both to read and to use as a springboard for one’s own linguistic flights. I encourage any readers of this piece to offer their own terms of venery as comments. Here’s one to get you started:

a scribble of writers

Let me quote Lipton’s end as my own:

The language lives. The venereal game moves on. Your move.