Not news: banks making bank on overdraft fees, to the tune of $30+ billion

Here’s a radical idea: let’s do away with unsecured overdraft altogether

According to Moebs Services, Inc., last year banks collected $31.9 billion in overdraft fees. This meme sums it up nicely, I think. 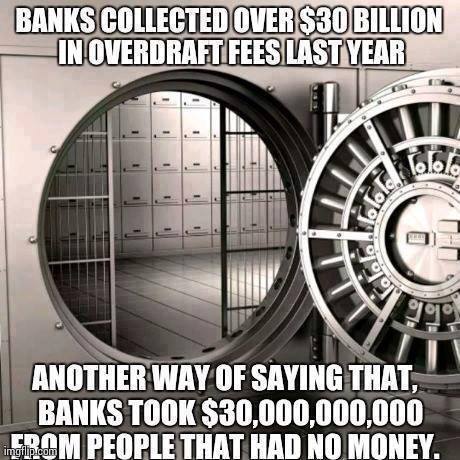 If banks only offered overdraft protection secured by savings, I’d be all for it. Further, if they let the customer personalize their preferences, largest first, smallest first, chronological, specified payees first, transaction type first, that would be even better. But make that an option solely for customers who secure that protection with a savings account specifically locked down for that purpose.

This plan might sound draconian, but if banks started letting debit transactions decline and checks bounce like they should when there’s insufficient funds, I think people would be a lot more cautious about their bank balances, especially when serious consequences like NSF charges from the payee, getting turned away by those payees after an established history of NSF checks, and the occasional passing bad checks charge with the police would be real risks again. Banks “warn” consumers who have overdraft protection unsecured by savings that the option isn’t to be abused as a line of credit, wink wink, but I think it’s self-evident that the predation qua service is abused by consumers as an easy line of credit in spite of that because that $36 fee today is better than going without food for a couple of days and besides, payday is just 1.5 weeks away so the bank can hit ’em again with that 7-day fee.

Eliminating that so-called service would reign in what is essentially a predatory lending scheme by any other name and force people to be more cautious because stores, landlords, mortgage holders, etc. will hit them with punitive NSF fees (or worse), give ’em the stink-eye for passing a rubber check, maybe refuse future checks, and payees might well call the cops for passing bad checks. Those are serious disincentives.

Getting declined at the register might be a real embarrassment, or even worse, a crisis, if, for example, the gas is already in the tank. This can be solved quite readily, though. There’s already data flowing back and forth. There’s already a monitor of some nature displaying information. The whole system is driven by databases. Certainly a few queries and if’then’s later would be able to resolve a fairly simple payment dilemma.

Further, if we eliminate the illusion of easy credit that isn’t, it will become even more apparent that hard times are just that, hard times. Perhaps that’s what it would take to galvanize voters into forcing whatever political action is necessary to address the most egregious and unjust disparities under which we suffer. Overdraft bank profiteering schemes just perpetuate the stupid consumer culture that keeps us hobbled.

Added bonus, there’s plenty of room in a solution like this for banks to make perhaps even more money. Starting a checking account? Here’s a deal, new customer! Open your checking account today, and you can start a “peace of mind” (POM) account to secure your checking against overdraft. We recommend starting your POM with the equivalent of one month net salary/wages. Don’t have it? No problem. Starting small is better than not starting at all. We’ll gladly loan you $50 to start, at a very fair rate of only 8% APR. For every transaction that’s not an even dollar amount, we’ll add the difference up to the next dollar for the transaction, and credit your POM balance accordingly until it’s fully paid off. You can even opt to keep “rounding up” to grow your POM account until it reaches the balance of your choice. Disclaimer: POM accounts are not interest bearing. Even better, upgrade your POM to a CD!

By combining the power of fractional lending with the sizzle of “even you can save” marketing, banks would have even greater reserves on hand. Maybe my banking-fu is off, but it seems to me banks would do far better to lend out $290 billion more at interest than to screw those least able to handle it to the tune of a measly $30 billion.

Granted, may this idea is a stinker, but every brainstorming session has its share of those. What would you suggest to rein in the practice?