“Hang Obama!” Is that always racist? 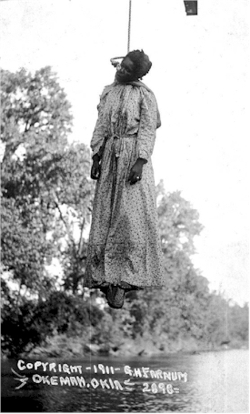 Once upon a time not so long ago, someone on the Internet expressed an opinion. I found my umbrage and took all of it. And, thinking I’m the Deathmonger Whisperer, I took it upon myself to gnaw on another huge leg of futility. I was fresh out of lamb, you see.

As one might gather from the title, the opinion expressed was none too subtle. One might even divine which side of the partisan divide excreted this little gem. Of late, I’ve taken to trying to engage rationally with those with whom I disagree…with tact and diplomacy. I know. I know. “Who are you, and what have you done with Frank?!” It’s only an exercise in futility if I actually hope to persuade someone to change their mind on an issue. Failing that, I’m learning a great many valuable things, not least of which is to vent expletives into the room instead of through my keyboard. It accomplishes just about as much, but it leaves the door open to genuine discussion.

The specific opinion expressed was that Obama is guilty of treason [citation needed] and should be hanged, as per the Constitution. Never minding for a moment that the Constitution only calls for Congress to determine the punishment without expressly stating how it should be carried out, much less that it should be death, much less that it should be capital punishment by hanging, I went with what to me (and a great many others) was the apparent (if not actual) racism implicit in the suggestion. To that end, I replied much as follows:

On what basis does someone suggest execution of a president upon conviction for treason? Where in the Constitution is that? Are some folks still unaware that suggesting execution by hanging in the context of a black person, given the less glorious aspects of our nation’s history, is rife with intimations of the worst kind of racism? If the racist tone is entirely by accident, that’s just unfortunate and perhaps remedied with a bit more time for reading and less time for un-Christian and hateful bloodlust. If the racism is real and actual, what sorry state have we arrived at as a nation where our fellow citizens will so boldly show that kind of rank hatred to the world as if it’s something to be proud of?

As you can see, I tried with all my verbose might to avoid playing the race card explicitly, just as the commenter avoided expressing racism explicitly, either by design or otherwise.

Surprising no one, I was called out by a couple of folks for, you guessed it, playing the race card. One aptly referenced our glorious history of hanging people for all manner of offenses, irrespective of race. Vive l’America!

So yet again, I went with my old standby…correlation, even if that too is only apparent. There seems to be a contingent of our population that tends toward far right policies. That contingent often appears to favor certain sources of information over, and excluding, others. That same contingent appears to have an unfortunate tendency to say things that get them labeled racist.* And that same contingent often seems  to like invoking such things as God and the Bible. I don’t think it’s much of a stretch to suggest it’s damned near exclusively that contingent that calls for death by hanging. Clearly it’s just a coincidence that the guy they want to hang is black. Erm, “half Kenyan, half white.” Maybe they’ll just wrap the rope around his white neck? I’m not sure how that’ll work.

In any event, never one to leave well enough alone, I went back for seconds.

At no point did I allege racism. I cautioned against the appearance of it because it is so easy to spot even when it’s not there.

We have a long, rich history of hanging. In spite of that, I think the problem of phrasing and appearance now has a different context informed by history. Not to Godwin the argument, but to draw a distinct illustration of good things gone bad…once upon a time the swastika was a revered symbol among different cultures, meaning all manner of positive things to them. Along came Hitler, and that symbol has been stigmatized, at least in the West, ever since. Just about anyone using it today outside of culturally appropriate contexts would immediately trigger a reaction based on a reasonable suspicion that the person using it was perpetuating its worst possible connotation. History set that context.

When it comes to hangings and race, thanks to the racially-motivated lynchings in the Deep South not so very long ago, within the living memory of a great many, even the suggestion of hanging a black person, whatever the reason, will initially stink to high heaven. One might explain it away, and even mean it sincerely, but it’s an incautious suggestion at best that does more harm than good when it comes to advancing the initial idea, in this case trial and conviction for treason. With all the ways to kill a person that we have available, hanging is but one and has that certain stigma to it.

Perhaps we can resolve the method of execution really simply once he’s convicted of treason. How would Jesus suggest we kill him?

* To be fair, one visiting the link to the Google search on examples of right wing racism will find plenty, as well as counterexamples of racism on the left. This should surprise nobody. Neither of our major parties have cornered the market on racism. One is just more apt to get called out for it. It helps to be garish and gauche.