American conservatives: some of the most important history you’ve probably missed

Racism or abortion? You decide. 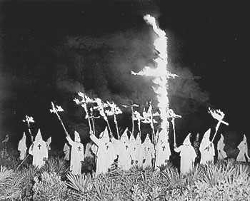 For the sake of history and truth, this might be the most important thing you read in quite a while.

The Real Origins of the Religious Right @ Politico

Short version: evangelical “community organizers” (recognize that dig?) and bearers of false witness initially tried to fire up the right wing evangelical “moral majority” (currently only approximately 26% of the US population…hardly a majority of any kind) in support of racially segregated schools. Patron Saint of the new GOP, Ronnie Reagan, who committed treason to win the 1980 election by interfering with the release of US hostages held by Iran (somehow omitted from this article), trotted out support of racial segregation but got punched in the political junk for it and backed down. Bob Jones University, the school that took the issue all the way to SCOTUS, eventually lost, and with the case any hopes of regaining its tax-exempt status in an 8-1 decision. That’s one helluva SCOTUS decision. The one justice that supported racial segregation? Ronnie’s SCOTUS appointee Renquist.

If you thought, as I did, that the evangelical community got its start and staying power from opposing abortion, you, like me, would be mistaken. That they have perpetuated this myth enters the territory of flat out lies (see above link to an excellent article on false witness) in the interest of politics. THAT is how community organizing is done. Keep fishing for an issue that will eventually piss people off if you rile ’em up, then keep that group of people riled up about all the issues you can make up. That’s the right wing taking a page right from Saul Alinsky’s playbook, Rules for Radicals.

Lest there’s any doubt about how evangelical leadership really felt about abortion:

“In 1968, for instance, a symposium sponsored by the Christian Medical Society and Christianity Today, the flagship magazine of evangelicalism, refused to characterize abortion as sinful, citing “individual health, family welfare, and social responsibility” as justifications for ending a pregnancy. In 1971, delegates to the Southern Baptist Convention in St. Louis, Missouri, passed a resolution encouraging “Southern Baptists to work for legislation that will allow the possibility of abortion under such conditions as rape, incest, clear evidence of severe fetal deformity, and carefully ascertained evidence of the likelihood of damage to the emotional, mental, and physical health of the mother.” The convention, hardly a redoubt of liberal values, reaffirmed that position in 1974, one year after Roe, and again in 1976.”

“When the Roe decision was handed down, W. A. Criswell, the Southern Baptist Convention’s former president and pastor of First Baptist Church in Dallas, Texas—also one of the most famous fundamentalists of the 20th century—was pleased: “I have always felt that it was only after a child was born and had a life separate from its mother that it became an individual person,” he said, “and it has always, therefore, seemed to me that what is best for the mother and for the future should be allowed.”

“Although a few evangelical voices, including Christianity Today magazine, mildly criticized the ruling, the overwhelming response was silence, even approval. Baptists, in particular, applauded the decision as an appropriate articulation of the division between church and state, between personal morality and state regulation of individual behavior. “Religious liberty, human equality and justice are advanced by the Supreme Court abortion decision,” wrote W. Barry Garrett of Baptist Press.”

Make no mistake. This group of political agitators didn’t start out protecting the so-called sanctity of life, and even tended to agree with those like me who insist that life begins at the golden moment, the first breath. Genesis 2:7, for those who like a Scriptural basis: “Then the LORD God formed a man from the dust of the ground and breathed into his nostrils the breath of life, and the man became a living being.”

Evangelicals, shored up by the defection of racist Dixiecrats away from the party that pushed Civil Rights, originally tried banding together around racism. Funny how that was a non-starter then. It should still be a non-starter today.