Book Review: Throwing the house from the window by Joshua William Booth 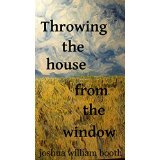 Throwing the House From the Window by Joshua William Booth

A couple of things will become obvious quickly for readers of this review. The first is that the reviewer has the same last name as the author being reviewed. That would be because we are related. Put that aside. If writers from Sophocles to Turgenev to Steinbeck have taught us anything, it’s that father to son assessments should be read with…a critical mind, let’s say.

The second is that the author of this volume of poetry is a working poet as well as the poetry editor at Scholars & Rogues. So I admit freely there’s a bit of insider trading going on here. But I challenge the reader to find a publication that does not tout works by its own staff. For those who’ve taken that challenge – well, they’ll be gone awhile, so let’s move on, shall we?

Throwing the house from the window is Booth’s third book and second book of poetry. A brief look at his first two works is probably apropos to set this third work in context.

His second book, Danger! God Particles, is a series of what would commonly be called “flash fictions” these days, though Booth, an admirer of Donald Barthelme (and arguer with this reviewer on multiple occasions about the author’s merits) would point the reader towards Sixty Stories as an influence.

His first, Support Our Drones, is poetry of a decidedly political stripe as Booth uses his work to come to terms with a country and a world deeply changed by the events of 9/11 (Booth was a personal witness of that day which occurred while he was a student at Columbia University). In fact, Sam Barbee, a noted poet himself, says of the work:

Here he tries to make sense of the horrific residue of 911, unsanctioned Mid-Eastern wars, and global corruption at so many levels. The traditions and faith once held dear have fallen short, and the poet has refused to turn away from the questions and the disheartening answers this twenty-first century world provides. Support Our Drones is courageous, and repeatedly asks if the reader has the moral fiber to make those same inquiries of himself and embrace the foreboding reply.

That second book, Danger! God Particles, explores, through a series of “sudden fictions” (to use a term Barthelme favored), the author’s religious doubts and realizations about faith. Think of it as C.S. Lewis for the postmoderns.

That brings us to Throwing the house from the window. This collection is decidedly more eclectic than his previous works, both of which had the overarching themes mentioned above. This volume takes a swipe at a number of social issues (poems such as “If You See Something, Say Something,” “In a Riot,” and “Hoodies”); looks at both the personal and professional struggles of being an artist (poems such as “Muse,” “Instinct”); and experiences such as coping with grief (“Eulogy,” “Elysium”), and the search for faith (“Angels,” “Easter”).

The book’s preface is a poem itself and takes a cue from – Baudelaire, of all people:

You who declare that poetry is dead, I say to you:
It is alive and well on the other side of the hyperlink.
It has grown a million new heads since this morning.
It cannot be ignored. It stares back at you,
A thousand glassy eyed cameras, witnessing
It listens to your whispered conversation, processing.
It saw you dive headlong over the concrete barricade.
It contains multitudes and, when moved, can spew
The afternoon into the gloom of an empty room.
It wriggles up from the sewer of the unconscious,
From all you removed from your own view,
A wart cut off so many times, still growing back,
DNA spiraling viral, your own worst enemy, you.

The reference to “Au Lecteur” may or may not be intentional – but since the opening story of a book by this guy references this same poem, there may be a connection. I’d be flattered if there was, given the quality of the poetry in this book.

The language in the above poem is typical of the language throughout Throwing the house from the window: the poems bristle with the vocabulary of science, politics, art, music. Booth is a writer who both understands the power of language and the power of poetry. You won’t always like what you read in the sense that you won’t be soothed by it, coddled by it, mindlessly entertained by it. Instead you’ll be rewarded with rich imagery, not always beautiful, but always well chosen – and with a point of view and something to say. Given the literary landscape these days, that’s aplenty.

The title, Throwing the house from the window, comes from a Spanish expression roughly equivalent to laying it all on the line. More specifically, it refers to offering the guest a banquet where every effort is made to provide the richest repast possible, no matter what the expense to the host.

Josh Booth has done that with this volume of verse. My advice? Dig in…..