If corporations are people, what about capital punishment?

It’s about damned time we remembered that corporations are chartered and that charters can be revoked. If they’re actually people, would that be the death penalty? On those terms, I am not opposed.

In aid of that cause, I recommend passing this absolutely brilliant idea by one Mr. Kyle Noonan along to your Congressperson at your earliest convenience. Send letters to your editors. Make a noise. There’s apparently good reasons why our current corporate sanctions don’t work, largely owing to the inability of state attorneys general to recognize the greater need of the nation as compared to their own state revenues and jobs. That, and like vultures, other states are just waiting in the wings waiting to pick up the pieces of the carcass and resurrect them back home. I can’t help it. They’re magical vultures.

Just a couple of dead, crow-cleaned examples on pikes should make all the difference as stock prices take strategic punches to the junk. The huge institutional investors should either finally go too far in attempting to influence government policy, perhaps risking impalement enemas themselves, or should, I hope, place some calls to key movers and shakers with a simple message, “whatever you’re doing, knock it the fuck off. They’re calling for pikes. And pointy enemas. With the pikes!”

As usual, Lee Camp takes this point and swats it out of the park in his inimitable style. 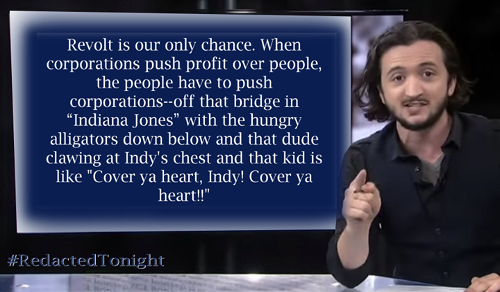 Image credit: Lee Camp. Follow him on Facebook if you don’t already. And that’s your thing. Because it would be weird and creepy and stalkery if that’s not your thing. We’re not affiliated or anything, so I can’t really speak for him, even a little, but I think he would like it. No, not the creepy, stalkery part. Just follow him already, will ya? Just. Not all creepy like.