Rollin’ coal: a trend that must, nay, will end

If poisoning is the answer, I don’t want to know the question. 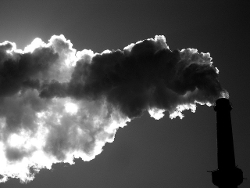 There’s this thing going around now called “rollin’ coal.” You’ve probably heard of it. On a small scale I don’t think it makes that much of a difference, but here’s what those folks think is funny…pouring out thick carcinogenic diesel exhaust at people they don’t like.

With great freedom comes great power. With great power comes great responsibility. One of those great responsibilities is to engage in civic life like civilized people. Freedoms abused should absolutely be restricted since the people abusing them are clearly not to be trusted with the power they were born into. What one does on their own land and behind their own doors is of no concern of society’s unless and until that behavior affects someone else in an infringing capacity.

Seriously. Anyone ever “rolls coal” on me, I’m getting a plate number and one really grumpy, bitchy, evil attorney to see what criminal charges can be brought and what I can sue for. That shit needs to end.

Diesel exhaust contains dozens of toxic substances but one of the leading concerns is the particulate matter which is toxic and very small in size at less than 2.5 microns. A typical human hair is 70 microns. The small size makes it highly breathable to the deepest part of the lungs. These ultra-fine particles are also known to attract other toxic substances in the air increasing toxicity.

Diesel particulate matter is linked to a number of serious public health problems including aggravating asthma, heart and lung disease, cancer and premature mortality. In June 2012, the International Association for Research on Cancer classified diesel exhaust as a known carcinogen to humans. The new classification is based on sufficient evidence that exposure to diesel engine exhaust is associated with increased lung cancer risk. The Environmental Quality Commission established a health-based benchmark based on increased risk for cancer from exposure to diesel in 2006. Oregonians have an increased risk for health effects from diesel emissions at present levels of exposure in everyday life.

As it turns out, even the good folks at pickuptrucks.com think this is one dipshitty thing to do. Even better, the EPA has clarified beyond a shadow of the doubt…it is illegal. Why, there’s even a handy-dandy web page where you can register a complaint with them, along with links to your local tribal, DEQ, or DEM authorities.

If you see this happening, by all means take down a license plate number and jot down all the particulars. I think it would be awesome if some jackasses lost out on the money they stupidly poured into this harebrained tomfoolery and had, hopefully, some hefty fines to sweeten the experience. Thank you, Republican President Nixon, for leaving us this legacy and an ironic last laugh.