“More and more, as I think about history…I am convinced that everything that is worthwhile in the world has been accomplished by the free, inquiring, critical spirit, and that the preservation of this spirit is more important than any social system, whatsoever.  But the men of ritual and the men of barbarism are capable of shutting up the men of science and of silencing them forever.” – Doremus Jessup in Sinclair Lewis’s It Can’t Happen Here 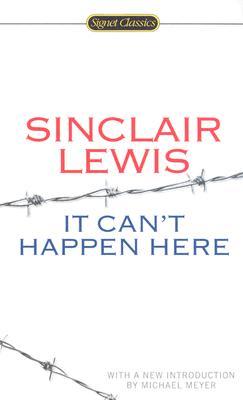 It may seem strange that I choose to write about Sinclair Lewis’s dystopian satire, It Can’t Happen Here, for July 4th, the high holy day of the American ideal/experiment. Lewis’s novel is, after all, about the subversion of American democracy into a dictatorship. Worse, that dictatorship, is controlled by the leader of a political party called, presciently enough, The American Corporate State and Patriot Party. If ever someone seemed a political seer trying to warn us to consider the results of our actions, Lewis is that seer and It Can’t Happen Here is his warning. Published in 1935, the novel both reminds us of the complicated economic and political stresses of that time and, in an eerie way, reads (for anyone who has been paying attention over the last decade) like the playbook of – well, of both the “corporate citizen” and “patriot” movements within American politics.

For those who don’t know the work of Lewis (and, sadly, that will be far too many), his stock in trade as a novelist was the closely detailed, wittily sarcastic satirization of American life and culture. His masterpiece, Main Street, looks at the smug conservatism of American small towns; Babbitt is an indictment of bourgeois conformity and the practice of “boosterism” (called by another name today, but as rampant now as when Lewis wrote his novel); Arrowsmith, an inquiry into how science, specifically the practice of medicine, is affected by “expected” definitions of success; Elmer Gantry, his attempt to expose the hypocrisy of too many “big time” religious evangelists;  and Dodsworth, a critique of the wealthy (whom Lewis found intellectually empty and self-absorbed). For this body of work Lewis became America’s first Nobel Prize winner in literature in 1930.

It Can’t Happen Here began life as an intended indictment of political demagoguery – in particular, Lewis intended to satirize “The Kingfish,” Louisiana governor and senator (and would-be US President) Huey Long. Long’s assassination in Baton Rouge, as well as Lewis’s growing concern as he learned more and more about fascism in Italy and Nazism in Germany, changed the course of his novel – and It Can’t Happen Here was the result.

The plot of It Can’t Happen Here takes place in a near future (published in 1935, it covers the years 1936-39) and concerns a newspaper editor in the small Vermont town of Fort Beulah. That editor, Doremus Jessup, describes himself as “Liberal”: he supports a labor union in their strike for better wages and working conditions at a local granite quarry, for instance. But he admires fellow Vermonters Ethan Allen and Thaddeus Stevens, so his liberalism is of the independent minded Yankee sort. He watches first with curiosity, then with growing alarm, the rise of Berzelius Windrip, a senator from an unnamed state in the middle of the country. When Windrip is elected President on the Democratic ticket over a “Lincoln like” Republican Walt Trowbridge and a frustrated Franklin D. Roosevelt who has left the Democrats after failing to gain the 1936 party nomination and formed his own party (much as his cousin did in 1912 in his frustration with the Republicans), the decline from democracy to dictatorship begins in earnest.

Windrip, who has campaigned on a platform much like Huey Long’s “every man a king” campaign strategy, upon inauguration begins to assume dictatorial powers and uses his private army, called Minute Men, who become increasingly militarized (any similarities between the “MM’s,” as they’re called and Hitler’s use of first the S.A., then the S.S. to enforce his political will is strictly intentional) as his muscle. Of course after his election, in the name of “security,” Windrip and his chief henchman, a sinister figure named Lee Sarason (a composite of Joseph Goebbels and Heinrich Himmler) outlaw all political parties except their newly created American Corporate State and Patriot Party (known as “Corpos” in the vernacular). Then, like any dictatorship, they begin a systematic program of repression and persecution of any who oppose their policies. Eventually the repression becomes so pervasive that even small town newspaper editor Jessup ends up in a concentration camp. Eventually, through the assistance of his lover, he is able to escape the camp and make his way into Canada where he becomes an agent for the counter-revolution led by that Lincolnesque figure I mentioned earlier, Walt Trowbridge. The novel ends on a hopeful, of somewhat unsatisfying note:

“And still Doremus goes on in the red sunrise, for a Doremus Jessup can never die.”

The focus on small town life suits Lewis well and plays to his strengths as one of the greatest chroniclers of that life. While keeping the bulk of the story in Vermont (there are a couple of brief trips to places like Boston and Hartford, and a digression in which Lewis brings readers – if not Jessup, who at that point is in a concentration camp that receives no news – up to date on the fate of the major Corpo characters) allows Lewis to explore how an emerging dictatorship might spread its tentacles over the nation, eventually infiltrating, co-opting, and controlling even small towns like Fort Beulah, VT, it separates us from feeling the evil of Windrip’s regime in a way that perhaps mimics our own separation from the evil that goes on, as we cavalierly term it, “inside the Beltway.” To give Lewis his due, that is certainly realistic. And given the times (and limits in communication, something we may forget given that we approach the book as readers now inured to a constant flow of information), the sometimes bucolic stretches of the novel balance the horrors that do eventually visit the Jessup family – Doremus’s son-in-law is ruthlessly murdered by Minute Men for “crimes against the state” (i.e., speaking truth to power); his daughter (the widow) eventually joins the Corpo Women’s Air Corps group and takes her revenge on the magistrate who ordered her husband’s death by flying her plane into one in which he is traveling – killing both him and herself; and Doremus, though eventually he escapes the concentration camp he has been sent to and voluntarily returns to Minnesota where he serves as a counter-revolutionary leader, loses (for all intents and purposes) his wife, his lover, his remaining children and grandchild, and his friends. Still, one can’t help feeling distanced from it all at times – as if Lewis himself is not completely sold on his premise – in truth, that he himself feels that “it can’t happen here.” In that, the novel falls a little short of its immediate predecessor, Huxley’s Brave New World and even more short of its successor, a work forged in the fiery furnace of World War II, Nineteen Eighty-Four.

In his Nobel Prize acceptance lecture, Sinclair Lewis bemoaned what he saw as an abiding fear in American literary efforts: “…in America most of us—not readers alone, but even writers—are still afraid of any literature which is not a glorification of everything American, a glorification of our faults as well as our virtues.” Ironically, perhaps that is what keeps It Can’t Happen Here from being a more widely esteemed novel than it is. Despite himself, Lewis’s Doremus Jessup, while he can criticize America’s failings, can’t help but praise America, especially its general indifference to even the most powerful social and political situations:

Blessed be they who are not Patriots and Idealists, and who do not feel that they must dash right in and Do Something About It.

And Doremus (and thus Lewis) can offer the following critique of American visionaries:

It is just possible…that the most vigorous and boldest idealists have been the worst enemies of human progress instead of its greatest creators? Possible that plain men with the humble trait of minding their own business will rank higher in the heavenly hierarchy than all the plumed souls who have shoved their way in among the masses and insisted on saving them?

So much for the Founders, Lincoln, Teddy and Franklin Roosevelt, Martin Luther King, et. al.

But Doremus learns – and this allows Lewis to lead readers towards (one hopes) similar epiphanies. Here, for instance, as the fist on the Corpo dictatorship closes around him, his family, his friends, his state, Jessup begins to understand how his “new order” is changing his little world:

Under a tyranny, most friends are a liability. One quarter of them turn ‘reasonable’ and become your enemies, one quarter are afraid to stop and speak, and one quarter are killed and you die with them. But the final blessed quarter keep you alive.

And Doremus learns – and Lewis tries to warn us – that when we lose the news, we lose the truth:

He could find no authentic news even in the papers from Boston or New York, in both of which the morning papers had been combined by the government into one sheet, rich in comic strips, in syndicated gossip from Hollywood, and, indeed, lacking only any news.

A wonderful thought experiment at this point would be to suggest that you leave this essay and go look at any of the news “services” – CNN, Yahoo, etc. But it can’t happen here, now can it?

And as with any system designed to perpetuate itself, re-education is a must:

They saw arising a Corpo art, a Corpo learning, profound and real, divested of the traditional snobbishness of the old-time universities, valiant with youth, and only more beautiful in that it was ‘useful.’

Lewis envisioned this coming from reconstituting higher education. It should be, then, duly concerning to contemporary readers that many of our “thought leaders” are suggesting that traditional educational systems can easily be supplanted by systems like MOOCs that “democratize” learning and force professors to be “competitive” and “entertaining” to survive in a “flat world.” This may indeed be, as Lewis calls it “useful.” The question that must be asked is – useful to whom?

So the Corpo dictatorship rises and establishes itself. But then wheels start to come off. Windrip, more a “glad hander” and demagogic orator than a leader, is deposed and exiled by his efficient (and highly decadent) lieutenant, Sarason – who is then eliminated (in the literal sense of the word in this political context) by the head of the military, a General Haik, who deals with dissent with Stalin-like efficiency. Haik, understanding the American psyche perhaps even better than his predecessors, adds a last element to the Corpo indoctrination methodology:

…there were also plenty of reverend celebrities…to whom Corpoism had given a chance to be noisily and lucratively patriotic….These more practical shepherds…became valued….For even for an army of slaves, it was necessary to persuade them that they were freemen and fighters for the principle of freedom….

Despite these efforts, despite attempts to crush dissent, eliminate dissenters, re-educate the populace through schools and churches, counter-revolution still comes – and the country splits. Doremus Jessup, who has suffered much under Corpo tyranny, joins the “enemy” and the novel ends with Lewis’s claim that men like Jessup – “real Americans” – will always exist – that there will always be those who are willing to risk their lives for real freedom – not some version of it presented as security or comfort or peace though perpetual war.

On this July 4th, let us hope that Lewis is right about that.