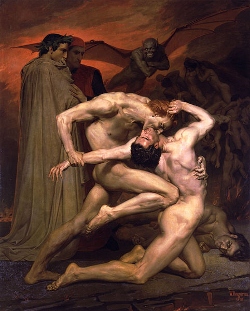 “The Good News Club curriculum is filled with over 5,000 references to sin and thousands more to obedience, punishment, and hell. It stresses Old Testament narratives of a retributive God who must punish sin, warns children that they will suffer an eternity in hell if they refuse to believe, and stresses complete obedience as the supreme value. Good News Club tells children as young as preschoolers that they have “dark” and “sinful” hearts, were born that way, and “deserve to die” and “go to hell.””

I realize I’m trolling on the religion front here, and that’s deeply sensitive territory for some, but this goes right back to what I’ve brought up before about Christians vs. Christians. Were I to live in a different culture, I’m sure I’d have the same attitude about Muslims vs. Muslims or Buddhists vs. Buddhists. Thing is, there are widely different beliefs from one denomination, even one congregation, to another. This is, for many, their “valid” (note: subjective) set of beliefs. For a great many other believers, and especially for a great many who have either left “the church,” non-believers, and other believers, the kind of theology taught in these groups (brace for being offended if this describes your faith, my bad) is utterly reprehensible. Foisting it on impressionable forming child minds (as young as pre-school) would be, in my opinion, as bad as showing kids that age rated R horror movies.

I’ve got really mixed feelings about children’s rights and parental rights over what goes into their children’s heads, but for now still err on the side of parents, but sometimes just barely. How would we feel if we thought there were a group of alien monster worshiping parents who taught their children from age 4 that to appease the Horrible and Powerful Space King they need to be willing to kill people who wear glasses and eat their eyes, otherwise the demonworms that live in their bellies will burn them alive from the inside and tear off their faces? Sound absurd and evil? Damned straight. Nobody would stand for it. People would cry “child abuse!” and our dominant-Christian culture would be all over that like white on rice.

Clearly I’m not comparing Christianity of any stripe to anything that awful. Hell, I even went out of my way to make it so absurd that it’s like nothing I’ve ever heard of, and I’ve gone out of my way to hear of a lot. The point is the horrible amount of fear it would generate, and the damage it would do to a child’s mind and perception of the world and the people around them.

Some Christians believe in a loving, just, merciful God and feel no need to terrorize their children into the family faith. Some believe in the Almighty retributive deity described in that quote above. Fair enough. But for the sake of not terrorizing children, I’d still suggest a gentler approach and a gradually more sophisticated explanation of the finer points as they get older and wiser so that they can shoulder the responsibility of faith for themselves.

To be perfectly honest, as much as I strive to express respect for the different faiths other people have, if I had children and caught someone teaching this version to my kids, especially without me physically present to either put an immediate stop to it or to mitigate what I might see as questionable points of doctrine, I can’t promise I’d remain even a little civil, any more than I imagine someone that holds these beliefs would remain civil in the face of someone trying to indoctrinate their kids with any version of Islam. See what I mean?