A tragic tale of WTF in the first degree 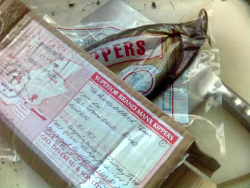 The first I heard of any of this was via Raw Story just “now” (Fri 6/27 PM), but f*!#$ them and their ideological hackery. No linky for you, RS. I went to their source, the Clarion-Ledger, which I’ve never heard of, and got um, wut? Well, there’s the link. The story is so damned differently-focused that I owe RS a link after all. Dammit. In their version, however, we don’t actually learn what the four alleged miscreants were charged with. Suspicion of conspiracy to break and enter a nursing home to photograph an old woman for a smear campaign against the eminently smearable Thad Cochran is about as good as RS gets, I guess. After a bit of clicking, the best description I get is from USA Today:

Mayfield was one of three men charged with conspiring to photograph U.S. Sen. Thad Cochran’s bedridden wife in her nursing home and create a political video against Cochran.

Now, I’ve tried very hard of late to refrain from leveling unseemly descriptions at folks many, if not most, on the left consider, well, less enlightened. Admittedly, some of the poster boys & girls make that a challenge, but I’ll do my level best to not speak ill of the dead here and prognosticate about the living instead.

What I can gather from these three peculiar reads is that there had been some degree of unity in the Mississippi Tea Party, spanning several smaller organizations under one ideological umbrella. To hear dear Ms. Bruce’s shockhorror version, those bad Tea Partiers were so organized around playing politics that her little branch of the Tea Tree just had to split and change their name because their much loftier ambitions were about policy and legislation, you see.

This may be. This may be. Honestly, I’m not keen enough on batting at the low hanging fruit to find out.

The Clarion-Ledger article (dare I say puff piece canoodling with overt bias so hard the virtual pages stick together now?) plays up the elements of hysteria and conspiracy-seeking beautifully with dear old Ms. Bruce, president of the MS faction’s faction (splintered splinter?) front and center, who oscillates wildly from grief-driven fits of gobbledygook to moments of what the author calls “lucidity.”

This must not have been one of those moments:

“They killed him,” she said in a raised voice full of pain. “They sent a SWAT team to his office, six officers, just to arrest him.

I surmise the lack of lucidity from the author’s clarification in the next graf:

Bruce knows Mayfield committed suicide this morning, but she shares a broadly held rage at the way the Madison Police Department brought Mayfield into custody. After all, none of the other suspects was treated in the same manner. While a SWAT team didn’t actually go to Mayfield’s office, several officers in multiple cars with lights on did.

Oh, so no SWAT team. Gotcha.

Maybe this was one of those lucid moments:

“I would send out an email with the latest news on something, and Mark would sometimes call and tell me, ‘I don’t think that’s right. Let me check on it for you,'” Bruce said. “He was always concerned that the truth was getting out there. He wanted facts.”

Did the head of the Mississippi Faction’s Faction just basically say what I think she said? What I hear in my head when I read that:

“I’m one of those people who sees something online and doesn’t grasp the importance of fact-checking even a little, so I just forward every damned thing that seems right to me. This is an important part of being policy and legislation oriented, unlike those bastards in the state’s actual Tea Party. Now, Mark was one of the good ones. He stayed with the bad guys, but helped me not make an ass of myself. He was concerned with truth and facts. Good thing, too, because I wasn’t.”

Maybe you’re not as shocked as I am by this, but for the sake of all that is pure and wholesome, and giggleworthy, I think you should be. Credulous person forwards BS to other credulous people and doesn’t grok the irony of being so unraveled at the end of the fringe that a good guy from the fringe says, “doll, honeycakes, buttercup, that just won’t do.”

If only the story stopped being that weird right there. This is where I segue to a new segment I’m going to call

Since Mayfield was the Tea Party vice chairman in Mississippi, I’ll assume he was:

He was due to face a grand jury for what, exactly? Conspiracy to, well, anything would be criminal, sure, but conspiracy to break into a nursing home and photograph a sick old woman. It doesn’t even seem he was the one who committed the B&E or the photography. That’s the kind of high crime that would see a wealthy, white, old, well-connected, conservative male lawyer in Mississippi behind bars until…lol, who am I kidding? Surely his attorneys would have gotten him off with a slap on the wrist, no matter how “heinous” the conspiracy.

Granted, his business might have been ruined. Maybe he was ashamed. Maybe he really, truly just couldn’t face the music. In any event, his end is tragic.

Hrmmmm. Why does that smell like a week old open can of kippers on a hot Danish day?

Could it be that someone was really afraid of what he might say? Hollywood tells me that a gunshot to the head is one of the easiest staged “suicides,” after all. As well, it seems a great many notable news outlets refer to “apparent suicide.” CNN reports:

“Because all of the indications, it appears to be suicide, but we still got some things to look into,” Ridgeland police Chief Jimmy Houston told CNN. “He left a suicide note, and we are verifying its validity.”

A somber note was introduced into the intraparty fight on Friday when a Tea Party leader committed suicide.

I think I’ll go with the, I can’t believe I’m saying this, superior coverage provided by CNN and the Ridgeland PD here. Until an investigation is complete and the facts as we’re told them are in, it just looks like suicide for now.

I’m not suggesting McDaniels had anything to do with it. Heaven forbid. He might be willing to tear his own state party politics into so many pieces of cat-shredded toilet tissue so the Dem can win, but trigger man? I doubt it. And the eminently reasonable McDaniels strategist, Keith Plunkett, surely would have gone into hiding rather than publicly lose his shit and subject himself to ridicule thusly with a Tweet:

A good man is gone today bc of a campaign to destroy lives. To all “so called” Republican leaders who joined lockstep: I WILL NOT REST!

I’ll just assume that nobody who actually mattered was given a very discrete suggestion by someone else who doesn’t actually matter so that people who do matter might never get their hands dirty with all that grey matter. After all, it was an apparently very good man and three nitwits who somehow got themselves involved in a nursing home invasion and aggravated photography with intent to gawk. When the smoke clears, nobody will know nuthin’ ’bout nothin.’

Game over, man? Not with an investigation in progress and a grand jury still awaiting the three nitwits. This might well dry up. For now, I’m just going to assume this tragic tale of rampant idjit clusterfuckery is a gift that will just keep on giving.

On a far more serious note, rest in peace, Mr. Mayfield. I never knew you, but you are clearly thought very well of by your peers. More importantly, to me at least, you tried to keep one of your, um, less veracity-driven admirers from spreading pure, rank, steaming BS. At least I assume that’s what she would have shared. I doubt it would have been viable liberal talking points, after all. Thank you. May that be your real legacy to the teeming mass of sharks, piranhas, barnacles, flotsam, and jetsam you swam with.