The two faces of ISIS: summary executions and planting flowers

The march of the Islamic State in Iraq and al-Sham is marked by both savagery and the provision of social services. 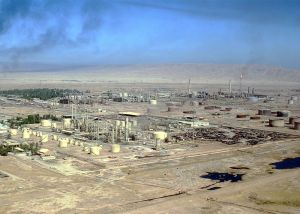 If ISIS moderates its brutality, maybe it should be given a shot at running Iraq. (Photo of power plant in Bayji: Wikimedia Commons)

At the Washington Post Monkey Cage, Andrew Shaver and Gabriel Tenorio report that a “lack of basic services, including electricity, fuel and water … may have laid conditions suitable for ISIS’ spread.” In order to “assess how the provision of social services during the Iraq war affected insurgent violence,” they examined “the relationship between available electricity and insurgent attacks on coalition forces.” They found “strong if preliminary evidence that increased electricity supply worked to reduce insurgent violence during the conflict.”

For instance, in 2007, Shaver and Tenorio write:

In fact, when the Islamic State in Iraq and al-Sham took over Falluja in March, they began instituting services. For the Associated Press, Sinan Salaheddin and Sameer Yacoub reported at the time:

Iraq’s al-Qaida-inspired militants who took over the city of Fallujah are now trying to show they can run it, providing social services, policing the streets. … Gunmen in ski masks and Afghan-style tunics patrol the streets, but also perform a sort of community outreach. On a recent day, they were seen repairing damaged electricity poles and operating bulldozers to remove concrete blast walls and clear garbage. Others planted flowers in a highway median, and some fighters approached residents in the street and apologized for gaps in services, promising to address them.

But can they curb their executions and hand amputations for minor theft? In Fallujah, the authors continued, “apparently to avoid alienating residents, [ISIS] has so far avoided enforcing some of the other most extreme aspects of its hard-line interpretation of Islamic law, overlooking some practices it considers ‘haram,’ or forbidden, several residents said. Barbers who trim beards are not being closed down, and women — who usually wear headscarves in the conservative city — are not forced to take on the even more conservative face-veil, for example.”

Meanwhile, in Raqqa, Syria, which it also controls, ISIS “posted videos purporting to show [its] members there sponsoring games such as musical chairs and telling jokes to laughing crowds [and] distributing food to needy people in a refugee camp and giving money to a female beggar.”

Perhaps it’s time ISIS had its shot at running the country. In recent years, it’s not only the United States that’s failed, but Iraqis pre- and post- the U.S. invasion. It’s just that, with their apparent competition with Boko Haram to determine which is the most savage group of Islamist militants extant, it’s difficult to believe that providing for the Iraqi people isn’t just a ploy to assert their primitive brand of sharia.

Tagged as: Iraq, ISIS, Islamic State of Iraq and Syria