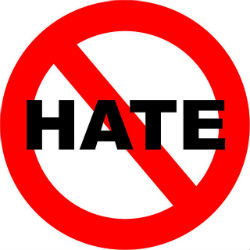 Creeps and jigaboos and death wishes, oh, my!

Your Facebook page is one of those pages that makes me answer the question, “what does a Like even mean?” in a really atypical way.  I “like” your page so I can see your posts in my news feed to keep abreast of your political positions.  Like I don’t have enough stress in a day, right? Today you had a beaut. a quote from Congressman Greg Walden, dated 6/9/14, against a backdrop of President Obama with his feet up on the desk, top-captioned “Obama is ignoring the constitution.” The quote:

“[The White House] needs to learn that Congress actually matters under the Constitution.”

Usually I just roll my eyes and move on. Sometimes I actually agree with your posts.  This was one of those times. Even so, this post got under my skin, so I felt the need to reply. Not that replying actually makes a difference on your page. With scads of comments, it’s not like more than a handful of folks will even see my contribution, and it’s hardly like anyone would take it to heart. Nevertheless, like a bird landing on a telephone line, I chirped into the fracas:

“Where was this line of reasoning when Cheney pushed the concept of the unitary executive? Oh, wait. Never mind. That was your boy, so it was okay.”

Then I committed the cardinal error. I read the comments. Never. Ever. Ever. Neverever. Neverino. Never. Read. The Comments. (h/t Bob & David). What I found should have been no more shocking than to discover clouds in the sky, fish in the ocean, or an NSA spook living in my toilet tank. That said, I’ll jump ahead a wee bit and post for your reading pleasure something from your own About page that I’m sure you intend to be un-ironic:

PAGE POSTING GUIDELINES: While all viewpoints are welcome, and open discussion encouraged, posts which engage in personal attacks, or include vulgar, profane, hateful or obscene language will be removed. Individuals who continue to violate these guidelines will be removed from the page. Users accept these terms by posting on this page.

That said, one might imagine that with the money you’re raking in, you must not spend a lot of time using any of it to pay a staffer to actually enforce the above referenced policy, at least when it comes to, shall we say, your most benighted [1] viewers and the requisite windowlicker contingent. Hell, even John McCain did that much at a Town Hall meeting, and it may be the only good thing he’s done since he left ‘Nam.

That said, do you think you might be bothered to scan through your comments and enforce your own stated policy? In order to respect the privacy of the individuals who made the comments beneath this letter (screenshots of your Facebook page taken 6/17/2014), I have redacted their names. Of the 212 comments on your page posted as of when I started collecting screenshots, 9 were so repugnant I chose those for inclusion, 4.24% of the total, or more than 1 out of every 25 comments.

I leave it to your own ingenuity to locate the precise comments and deal with them in a manner which you deem suitable.  Until then, the readers of this missive are free to believe that those comments remain on your page, and that you refrain from calling them out in a very visible manner because you deem that approach to be suitable. Please don’t prove your opposition right by tolerating overt racism (cf. jigaboo) and thinly veiled calls to violence.

Thank you for the important work you do to bring the nature of your support into the daylight where decent people might see it and decide for themselves whether or not race is a factor in the treatment this president receives. To aid you in the important work of scheduling routine maintenance of your comments and enforcement of your own policies, I’ve included your office number below so readers may call to remind you.

You must be really proud of the intellectual acumen evidenced by your supporters in the comments on your posts. Keep up the good work herding the miscreants into one easy to find spot.  It’s a dirty, thankless job you do.

[1] My use of “benighted” is also un-ironic. I’m sure the subtlety is lost on you. I’m completely unsurprised that  your online following meets the following definition so thoroughly.

P.S. In the interest of honesty and fairness, you may also wish to post the following article to your page one day as your readers seem to think President Obama placing his feet on the desk is tantamount to high crimes and misdemeanors. President Bush also seemed to enjoy a comfy bit of lounging now and again, as did President Ford. And that ham Reagan really liked to cut up in there.

The Ridiculous Double Standard of “Respect for the (Oval) Office”