The Nissan Leaf and SolarCity – Renewable Journal for 6/8/2014

On June 7, one Colorado family took a leap into unfamiliar waters with both solar panels and a Nissan Leaf. 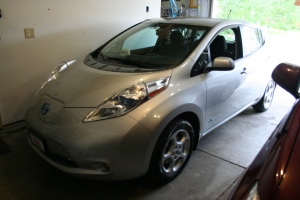 Yesterday morning, my wife and I bought a new Nissan Leaf. And yesterday afternoon, after careful review of the terms, we signed a solar power lease contract with SolarCity.

Talk about diving into renewable energy head first. What the hell are we – I – doing?

Here’s the last few weeks in a nutshell. My wife and I have been chatting about replacing my 2003 Subaru Outback Legacy (affectionately named Dogbert, for the plush toy I kept on my dash – “Out! Out! You demons of stupidity!”) for at least a year now, but given the other car in the house is a standard Toyota Sienna, I was reluctant to give up our only all-wheel drive vehicle in favor of a fun commute car. And even though the Outback was at nearly 120k miles, it still drove fine and had enough life left in it that I didn’t want to take on the additional debt of a new car.

So I’d been going round and round between two possible options for when we finally replaced my Subaru:

Then I decided to stop in at a SolarCity booth at a local farmer’s market. I talked to the nice saleswoman about SolarCity and liked what I heard well enough (leased panels, $0 down, no maintenance costs, a 30% savings on electricity at turn-on and getting better from there, and so on) that my wife and I made an appointment for the following week. What does it hurt to talk, right?

After reviewing the proposal a couple of days later, we decided that the solar idea looked good enough that we wanted to pursue putting solar panels on the roof. And that’s when my wife said several fateful words:

“Brian, if we’re going to put solar on the roof, you should probably decide whether you’re getting an electric car or not first.”

Crap. I hate car shopping, and I’d been waffling on the AWD/great gas mileage decision for months. So I took some time, narrowed the list of dozens of AWD, hybrid, and electric vehicles down to four cars, and then went out for test drives. First stop – the Nissan dealer to drive a Leaf.

We were met at the dealer by a salesman who was still in the process of learning the vehicles on the lot, and he was unable to answer most of my questions regarding the Leaf. But he passed us off to the local Leaf expert, a nice Brit who drives a Leaf himself and who, when he discovered that I was an electrical engineer, grinned about being able to geek me out with details.

When all was said and done, we drove off the lot to go explore two Volkswagen Jettas (the TDI and hybrid) and a Subaru Impreza (that was woefully underpowered compared to my 2003 Outback Legacy). By the end of the weekend, I’d narrowed it down to two vehicles – the Leaf and the Jetta TDI. And by mid-week, my wife and I had decided that the Leaf made the most sense for how I was going to be using the vehicle.

In the process of deciding between the Jetta TDI and the Leaf, I calculated the annual cost of operation of both vehicles. The Leaf’s cost was about half that of the TDI and about 2/3rds of my Outback. When I figured up the new electricity usage, I realized that the Leaf would add 40-50% to my electric bill each month. And the SolarCity system I was looking at (but had not yet signed, pending the decision on the Leaf) would be too small to power the Leaf too.

So I contacted the SolarCity rep again, asked her to increase the size of the system, and she sent back a proposal that, due to limits set by my utility (Xcel), wouldn’t quite cover the full cost of charging the Leaf. But it would offset the vast majority of it, and still save us a ton of money every month.

So yesterday I traded in Dogbert (and the Leaf has become Dogbert 2.0) for a 2014 Nissan Leaf. And we’ve started the process of getting solar panels on the roof.

And I decided that this was such a major change for me and my family that I wanted to document the journey, in all its glorious strangeness, for better and for worse. Feel free to follow along.

[Update: I apparently failed to complete a sentence in the paragraph starting with “In the process of…” and Sam did his best to finish it for me. I’ve revised it to match my original thinking because, for some reason, he’s neither telepathic nor precognitive.]