Author’s limitations cause him to ignore the Tarheel State’s greatest fly fishing treasures. 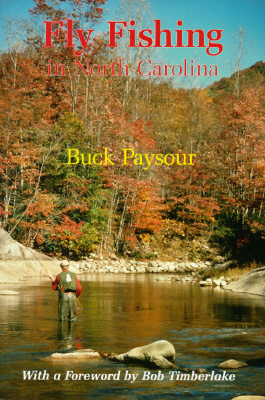 I’ve been reading some pretty serious works lately, so as a treat for myself I decided to jump a couple of books ahead on the book list and indulge myself with something fun. And so I spent a few days with renowned North Carolina fishing writer Buck Paysour. As I have stated for the record, I am a serious fly angler myself and live in North Carolina’s mountains, so Paysour’s Fly Fishing in North Carolina seemed just the sort of pleasant diversion to give me relief from the beautiful but slightly ponderous The Tenant of Wildfell Hall and that unrelentingly depressing and disgusting work The Clansman.

As I’ve mentioned, fly fishing  is a passion of mine. Add to that my mention of living in North Carolina’s mountains, and your logical deduction should be – “Ah! Trout bum.” You would be correct in this deduction. My fly fishing interest lies wholeheartedly in pursuing the impulsive Rainbow, the stolid German Brown, the impetuous Eastern Brook, and my favorite, the elusive, beautiful, and absolutely fierce Southern Brook trout. I am a trout fishing devotee, and my assortment of books on fly fishing includes many of the finest writers on the subject: the amusing and insightful John Gierach; the thoughtful and passionate (and gone too soon, alas) Harry Middleton; and, of course, that terse poet of fly fishing for trout, Norman Maclean.

My first encounter with a fly fishing book on this year’s reading list was something of a letdown. So I had hopes that while that journalist’s foray into book length exploration of “the quiet sport” left much to be desired, Buck Paysour’s work, which I had read with interest since childhood (he was a longtime outdoor sports columnist for the Greensboro (NC) News and Record) would prove to be a more satisfying read.

Alas, not so much. In one way my criticism is, I think, fair enough; in another way, well, maybe not so much.

Fly Fishing in North Carolina does not suffer as directly as the Rich Tosches’ work, Zipping My Fly, from what I termed in my essay on that book “compilation errors” (my complaint about the Tosches book was that because so much of it was composed of what had originally been newspaper columns that more revision and editing would have helped the book seems less disjointed, more – thematically, at least – cohesive). There may be some columns in this volume, but I give Paysour credit for integrating them into his book much more successfully than his Western counterpart did.

That said, however, there are some writing issues in Fly Fishing in North Carolina that will bug persnickety readers like me. The book is a somewhat meandering work, which in itself is not necessarily a bad thing; in this case, though, it seems that Paysour’s meandering comes from not having decided clearly for himself as writer (and, therefore, for us as readers) how his work should be organized. He vacillates between making the organizing idea (thesis, for those of you with my sort of academic inclinations) the proposition that fly fishing in North Carolina is special because one can fly fish anywhere in the state from its Appalachian mountains to its Atlantic coast and offering readers a guide book whose proposition is that there are fish anywhere in North Carolina that fly anglers can enjoy pursuing. Because he vacillates between these propositions, one feels at times as if the chapters of the book sweep one from one end of the state to the other, if not completely unexpectedly,  a little too haphazardly.

There is an audience issue, too, that readers from outside NC may find slightly disconcerting, perhaps even annoying. Paysour writes in an intimate style that allows him to assume a folksy tone well suited to a book encouraging anglers to try NC fly fishing; this is especially well suited to the anecdotal nature of much of the information the author shares – he makes fly fishing everywhere in NC sound appealing. But certain elements of the work, such as what seems to be a keen desire to name check his many fishing companions, will sometimes test a reader’s patience; there’s a tendency to slip over the line at times into a sort of “good old boy” storytelling chatter that, while familiar to a fellow Southerner like myself, nevertheless detracts occasionally from the writer’s goal of promoting the pleasures of fly fishing in the various regions of North Carolina.

The above, are, I think, fair enough criticisms. Now for a little indulgence of my personal bias and a little, likely, unfair criticism.

For the unaware, North Carolina is composed topographically of three distinct sections: there’s a large coastal plain in the eastern part of the state; a narrower belt in the center composed of rising elevation and foothills called the Piedmont; and then there are the NC mountains, known locally (and, incorrectly, interchangeably) as the Blue Ridge and/or Smoky Mountains. The sport of fly fishing is, largely, associated with fishing for trout which are found in those mountains. In a book of some 240 pages about fly fishing in North Carolina, Paysour devotes about 50 to mountain fly fishing – and at least 25 of those pages are devoted to fishing for small mouth bass. That means that in this entire volume only about 25 pages are focused on fly fishing for trout. I realize that my devotion to fly fishing for trout borders on fanatic; but Paysour’s frustration with his own limitations as a fly angler (he freely admits that he struggles with casting on NC’s narrow, tree-lined mountain streams) leads him to indulge his bias for fishing NC’s many impoundment lakes as well as its coastal sounds for bass, perch, sea trout, puppy drum, et. al. So for this reader, while there was much fly fishing, which I found fascinating, there wasn’t much mountain trout fishing, which I found disappointing.

As I readily admit, however, my bias is my bias and doesn’t change one fact about this book. Fly Fishing in North Carolina is a book full of a wonderful esprit of pêche à la mouche. While, sadly, its author is no longer casting with us, his book serves as a reminder to us all to enjoy every fishing trip – and that North Carolina, warts and all, is a great place for any kind of angler.