The oyster climbs the Great Chain of Being: Eleanor Clark’s Locmariaquer

“…But thilke text heeld he nat worth an oyster….” – Geoffrey Chaucer 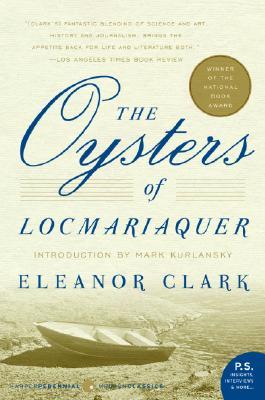 The Oysters of Locmariaquer by Eleanor Clark (image courtesy Goodreads)

Anyone who reads Eleanor Clark’s classic The Oysters of Locmariaquer will come away from the book convinced of two things: 1) cultivating oysters is a complex and difficult task that might well suck the life out of one foolish enough to try to do so; 2) if the people from any place are up to the task of cultivating oysters, it is the Bretons. Clark’s book falls into that interesting category of nonfiction made famous by the great John McPhee. That is, Eleanor Clark, like McPhee, combines meticulous research (there is more in this book than anyone this side of an ichthyologist would want to know about the biology of oysters and the history of human/oyster relations) with personal narrative (there are stories of the lives of Breton villagers who are tied to the oyster industry – or to Brittany – that can move even the most jaded soul).

Of course, Clark antedates McPhee, and perhaps he owes her a debt for combining the scientific and historical with the personal in ways that can engross the reader and make one learn in spite of oneself. After all, Clark won the National Book Award for Nonfiction with this tale of Belon oysters and the Breton people who raise them in 1965, the same year McPhee published his first significant work.

That said, while The Oysters of Locmariaquer is a book one would certainly be glad to have read, it is not always a book one will enjoy in the midst of the reading. Clark’s style is discursive in the extreme, and at times she seems hellbent on making sure that the reader works hard to follow her meandering sentences. Then, too, there is the matter of how well she integrates the science of oyster biology within the story of a small area of Brittany where they used to be cultivated (alas, the Belon oysters she discusses so thoroughly, known in Latin as Ostrea edulis, are no longer cultivated there as a result of their decimation by parasites in 1973-74). The honest answer is that, unlike her spiritual heir in this sort of writing, the aforementioned McPhee, Clark sometimes seems to get slightly lost in her detailed explanations of Belon biology – and as a result, so may her readers.

Then, too, Clark favors a somewhat fragmentary style of storytelling. At times (though she never definitively uses stream-of-consciousness methods) she will give part of a villager’s story, then “jump cut” away (the cinematic term seems an apt description because of the abrupt nature of some of her departures) to a seemingly unrelated description of oyster cultivation, tourist behavior, or Breton literary history or geography. To give her her full due, it all adds up in the end – in truth, beautifully. But until one simply gives in and follows her mind in its rambling, the narrative may frustrate readers seeking a more conventional style of storytelling. She is also fond of long, long sentences – not Faulknerian monstrosities, mind – but sentences long enough – and, for this reader, at times annoyingly arrhythmic, that force some re-reading to make sure one has their sense:

There is involved in all this, along with the specific trademarks of Locmariaquer and its environs, some general mystery of character shared with the rest of Brittany, pride of place, pride of being and of being in a certain rapport with the sea, that a foreigner can’t fathom and the rest of the French can’t either.

Such sentences, appearing as they do at irregular intervals and often mixed into a group of simple declaratives, do not come “trippingly on the tongue.”

So, in sum, The Oysters of Locmariaquer falls into that category of works where, for me, Henry James’s works reside: I am glad to have read it, but I can’t honestly say I enjoyed the reading as much as I should have liked to.