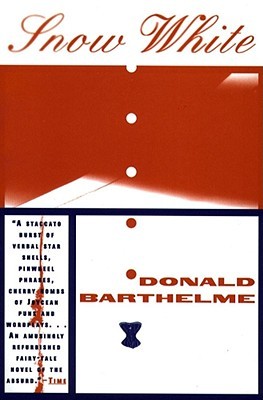 Donald Barthelme is a name closely associated with two of postmodern literary fiction’s most important structural/stylistic innovations: flash fiction and collage. While his reputation was built on his short stories – and Barthelme is celebrated for his innovations to that form – he also wrote novels (really, anti-novels) which, in Barthelme’s case, are constructed pretty much the same way as his stories: resistant to anything as bourgeois as a narrative structure, Snow White is composed of dozens of brief vignettes designed to force the reader to engage the text as a text. Thus, Snow White becomes not simply a retelling of the classic fairy tale, it also serves as a commentary on the fairy tale and its structuralist elements.

Barthelme’s characters have more in common with the Disney version of Snow White than with the original fairy tale from the Brothers Grimm. The dwarfs do not have names related to their predominant characteristics such as Sleepy, Grumpy, Bashful; they have ordinary names – Bill, Dan, Clem. Instead of being miners, they are entrepreneurs who manufacture exotic flavored baby food (at the novel’s close they are producing delights such as baby kimchee and baby bean thread).  As in the Disney film, Snow White does serve as the dwarfs’ housekeeper. But the entire group of dwarfs also has sex with the fair maid. Disneyland this is not.

There are other characters. There’s Paul, the “Prince Charming” character who resists his duty to rescue the heroine so vigorously that he becomes a monk and Jane, the “Wicked Stepmother” character whose plots against Snow White come to naught. Perhaps the most intriguing character is Hogo de Bergerac, who crosses characteristics of his namesake (Cyrano) with the Magic Mirror. All of these characters are interesting – none of them do anything to advance our understanding of the work.

Instead of any sort of clear narrative arc, Barthelme gives readers a series of events that occur in the lives of the various  characters. Often these events seem irrelevant to the narrative. Yet Barthelme counts on readers to attempt to gestalt a narrative from his (seemingly) random presentation of information.

It would be pointless for me to suggest to you that simply having the information Barthelme conveys would allow you to understand Snow White. That’s in large part what Barthelme is trying to convey – the irony that pervades this anti-novel is that for all the information we receive, in the end what we do (which Barthelme predicts on the last page of the work in the list of possible “interpretations” readers might have) with that information is fall back upon some familiar set of meanings which we can assign to it based on Barthelme’s information:

Snow White is the ultimate objectification of women.

Snow White is the ultimate statement of romance.

Snow White is the apotheosis of the fairy tale.

Snow White is a joke played on Western culture.

That indeterminacy makes it both a compelling and repellent work. And that might make Snow White the apotheosis of postmodernism: it turns literature’s most powerful attraction, ambiguity, into mere confusion.

And that confusion is the point. Or not. Who can say…?