Once upon a time readers actually wanted to learn from books… 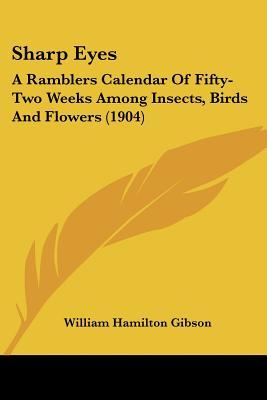 After a spate of book reviews for new found writer friends, this essay takes a look at a book from the 2014 reading list.  Sharp Eyes: A Rambler’s Calendar of Fifty-two Weeks Among Insects, Birds, and Flowers  is a series of descriptions and discussions of weekly nature walks. It’s one of those wonderful late 19th century “educational” works that does its best to disguise itself as entertainment.

The book is an interesting relic of the late 19th century’s “naturalist” movement inspired, in part at least, by Henry David Thoreau. Naturalist, illustrator, and writer William Hamilton Gibson offers his observations of the New England woods around his Connecticut home. Sharp Eyes is heavy with mini-lectures in botany and entomology (one wishes for more about birds since those are for this reader the most interesting chapters) but Gibson writes in the literary journalist style of late 19th century American magazine work, so even the most tedious science lessons are larded with references to poetry and philosophy that leaven the scientific descriptions and explanations….

Gibson takes as his mentors, besides the aforementioned Thoreau, the poet and journalist William Cullen Bryant, 19th century America’s most renowned botanist, Asa Gray, and one of America’s early conservationists, the naturalist and essayist John Burroughs. The last of these three is Gibson’s true master; throughout Sharp Eyes the author compares both his own and other naturalists’ work to that of Burroughs (he faults, for instance, John James Audubon on his explanation of the “drum” call of the Ruffed Grouse, citing Burroughs as one who disagrees – then proudly notes that he, Gibson, disagrees with Burroughs’ explanation). But in other cases (salamander noises, the proper blooming period for fringed gentian) Gibson turns to Burroughs as undisputed authority.

The structure of the book suggests that perhaps it was meant to be source of inspiration for weekly nature walks; indeed, though I read the text straight through, I suspect one should read Gibson’s essays week by week (which might not be a bad thing given his penchant for the “ornate style” in his prose musings), then do one’s own “rambles” to try to identify that week’s discussed bug/plant/bird. The Internet Archive has the text available with Gibson’s remarkable illustrations should one feel so inclined.

The copy I have is one picked up in an antique mall and has a 1901 publication date. I understand that earlier editions had perhaps even finer lithographs, though I find this difficult to believe. Gibson enjoyed considerable popularity in his time as an illustrator for several prominent 19th century magazines for both adults and children including Harper’s and Saint Nicholas. His illustrations have a fascination in themselves; as noted elsewhere, they “had a nearly photographic and almost microscopic accuracy of detail which slightly lessened their artistic value, as a poetic and sometimes humorous quality somewhat detracted from their scientific worth.” The lithographs in my edition are both astonishingly accurate and absolutely charming. They remind one a bit of a cross between the work of John Tenniel and Orra White Hitchcock.

One criticism. Gibson’s book, while clearly meant for a general audience, assumes (and communicates) that engaging in “real” naturalist work should probably be reserved for males. Indeed, though he includes a letter from a girl, a reader inspired by one of his earlier books to become interested in entomology, he has made sport of her by having her bring a set of three cocoons into her home to hatch that contained both beautiful moths and scary wasps. Gibson then jests with her about failing to keep specimens of each (especially the wasp) for her collection – and launches into a rather moralistic lesson on “what a sad transformation the deadly thrust of a little sin may bring about.” Victorian paternalism at its best, that.

Still, Sharp Eyes: A Rambler’s Calendar is filled with the charm of a clever science teacher encouraging his “class” to practice science to learn it. One could learn a lot from it – especially by using it as a source for actually getting out and experiencing nature.