C.D. Mitchell understands the “Dirty South” better than many who trumpet their knowledge of it… 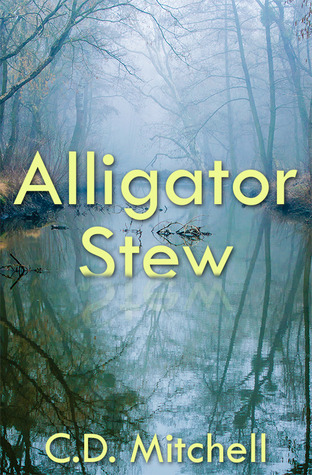 In my recent essay on Richard Ford as an influence on my own writing I wrote about  dirty realism, a style associated with a group of authors, several of them Southern. Besides Ford, I mentioned Ann Beattie and Tobias Wolff. (One might also include Jayne Anne Phillips, though her West Virginia roots might lead some to question her Southern bonafides.) The characteristics that distinguish writers who work this side of the literary street (including this guy, though his interest seems to incline to turning the style of dirty realism on rather different sorts of characters) are also characteristics of C.D. Mitchell’s work. In Alligator Stew, however, Mitchell, like any good artist, takes the dirty realistic style and runs with it, making it his own and linking it to classic Southern storytelling.

Mitchell’s collection of stories focuses on the small town of Delbert, Arkansas, a town very near one of the major North American fault lines, the New Madrid. This is significant to the action of the stories in this collection for two reasons: first, the time of the stories covers the months preceding (and briefly after) a predicted major earthquake; second, as Mitchell notes in his introduction and then demonstrates in his collection, it isn’t the big catastrophes that change the lives of most people – it is the “personal” earthquakes that rock our worlds. These can be as simple as a lonely, conflicted widower asking a long admired woman, a single mother with twin daughters, on a date – and having her say yes. It can be as complicated as a riverboat/crop duster pilot deciding to involve himself with international drug smugglers to achieve the kind of wealth he believes he needs to win the woman he loves. It can be somewhere in between: parents trying to keep a daughter’s involvement in a sex scandal from going public; a lawyer stripped of his “toys of the good life” by a wealthy wife who sells those toys (cars, boats, ATV’s) for $5 each. They’re wonderful yarns – the sort of gossipy good stuff you’d hear at the local diner – a place like Campbell’s Cafe in Delbert, Arkansas.

As you’ve realized by now, Mitchell moves up and down the socio-economic scale in these stories which puts him slightly at odds with dirty realism’s hallmark subject matter focus. Where he really departs from dirty realism is in his storytelling. While there is some matter-of-factness in the imparting of these tales, for the most part Mitchell owes more to a style of narration known in literary studies as “Southwest humor” – the telling of tales, usually with some exaggeration, in order to enrich their humor/pathos. It’s a very old storytelling method in the South and its hallmark, besides exaggeration and colorful language for comic/dramatic effect is its lack of interest in projecting an image of the South. The style reached its apotheosis in the work of Mark Twain. Humorists and storytellers of this “school” (and that term should be used as loosely as possible) are more interested in what scholar Richard Gray calls “…disrupted lives presented in a deliberately disruptive way.” In this collection Mitchell gives us a style that reads like Twain updated – to excellent effect. The disruptive nature of the storytelling is well suited to the disrupted lives of the characters in Alligator Stew.

The last story in the collection, “Flying Lessons,” reads more like the opening chapter of a novel than a stand-alone short story. While Mitchell reassures readers in his biographical notice for this volume that the characters in that story will be appearing in a forthcoming novel, one can’t help but feel left hanging – as if the author were suddenly called away from the table at Campbell’s Cafe where he was telling one terrific yarn after another before finishing a particularly good story.

That faux pas can be forgiven, though, because Mitchell gives us a South where one can buy for $10 a machine once used to administer shock treatments to state mental patients. And we learn what can happen to a mule once shock therapy is administered.

Alligator Stew gives us a South that makes us alternately laugh and cringe – in other words, a real South. We can ask no more.