Richard Ford’s Rock Springs and the Light it Provides…

“We have to keep civilization alive somehow.” – Richard Ford, “Communist” 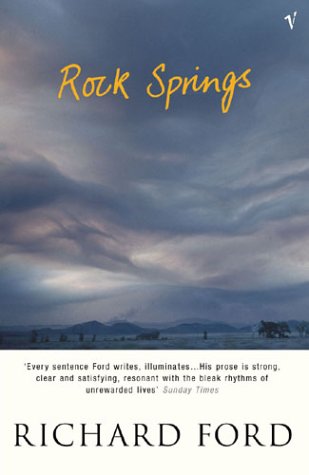 Aspiring writers choose role models for all sorts of reasons. Sometimes, as with those who’d emulate Byron or Baudelaire, it’s the attraction of the daring or Bohemian (or both) lifestyle as much as (in most cases, more than) the work. Sometimes, as with Hemingway or Salinger or Vonnegut, it’s the self-delusion that one can write (stylistically) as they do easily. If an aspiring writer sticks with it and develops a personal voice, the role model takes on another role: that of fondly remembered (and, perhaps, regularly returned to) mentor.

That is how it is for me with Richard Ford. I first encountered his work shortly after I’d completed my doctoral studies in writing. That was through his “breakout” work (as Wikipedia terms it) The Sportswriter. While that book was wonderful and led me to seek out more of Ford’s work, its most important function in my life was that it led me to the Ford book that I treasure most, his collection of stories called Rock Springs.

Ford’s work places him, at least according to critics, in a school of late 20th century writing called dirty realism. While I’m not overly fond of all of the leading writers in this group (despite sincere efforts, I’ve never really taken to Raymond Carver or Jayne Anne Phillips), some – Tobias Wolff, Anne Beattie, and, especially, Richard Ford, speak to me in language that I understand. Perhaps that is because, like me, they are, despite their best efforts, Southerners.

Rock Springs is a classic of dirty realism for a couple of reasons. First, the subject matter – lower middle class and working class people dealing with failing marriages, alcohol abuse, casual violence, sometimes accidental, sometimes not – is representative of the sorts of material writers in this school favor.

Second, and more important to me, is the writing style itself – dirty realism stories are told in matter-of-fact language tinged always with irony. Here’s the opening line of Ford’s story, “Great Falls” – an opening line I admire as much as any in the long history of the short story:

This is not a happy story. I warn you.

The writing throughout Rock Springs is larded with this sort of laconic beauty. One of the finest stories in a collection of fine stories is “Optimists.” After a teenager’s father has accidentally killed a friend in a pointless argument over the work ethic of railroad employees (of which the father is one), the boy observes sagely if seemingly unfeelingly:

…situations have possibilities in them, and we have only to be present to be involved. Tonight was a very bad one. But how were we to know it would turn out this way until it was too late and we had all been changed forever? I realized, though, that trouble, real trouble, was something to be avoided, inasmuch as once it has passed by, you have only yourself to answer to, even, as I was, you are the cause of nothing.

As I’ve noted, Ford’s writing style has served as an inspiration to my own. In subject matter I’ve moved in somewhat different directions: my first novel is a sort of “dirty realist” treatment of spoiled Southern upper crusters; my first collection of stories looks at teenagers in a small Southern town and how they are torn between the cultural upheaval of the sixties and the pointed unchangingness of their home; my latest book explores the pain and loneliness beneath the glamor of rock stardom. My books have gotten good reviews, and my writing has even been complimented.

But as I complete my latest book of stories I’ve returned to Rock Springs yet again. The stories are good; I’ve already published a couple and will publish more soon even as I submit the collection. Still, I want to be he “who shoots at the midday sun,” as the poet says.

So I return to Richard Ford’s Rock Springs. For any short story writer – or reader – it’s close enough to the midday sun to give one excellent light.