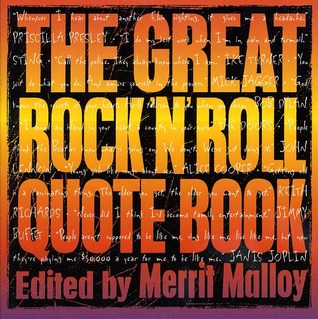 Had some errands this week that took me close – too close – to my favorite used bookstore. My wife had a doctor’s appointment later that day and since I had come away without anything to read, I, of course, bought a couple more books.

Hi, My name is Jim and I have a problem with books….

Anyway, I ran across the marvelous waste of time, The Great Rock ‘N’ Roll Quote Book by Merrit Molloy. This slight volume (you can finish it in a couple of hours tops with breaks for whatever you need to take breaks for) is larded with quotes ranging from the sublime to the ridiculous. And as you read you can guess which musicians will say which types of things.

Molloy organizes this book by topics, so it’s a fun book to thumb through and find a rock star saying something profound, idiotic or (in most cases) some mixture of the two on a wide range of issues: “Ambition,” “Beginnings,” “Critics,” “Ego,” “Fans,” “Hype,” “Love,” “Sex,” “Writing,” and dozens more. He also cites a wide range of performers, from the most authentic (Dylan, Joey Ramone, Little Richard) to the least (Madonna, Michael Jackson) as well as a range of what we can call, perhaps a tad cheekily, intellectual depth from the thoughtful to the point of pretentious (Peter Townshend, Bono) to the damned sure not going to mistaken as serious in any way (Ozzy Osbourne, Nikki Sixx).

The only way, ultimately, to do a book such as this one justice is to offer a few random quotes and let you determine their value to the advancement of culture:

“I got fame and fortune, and I lost my sense of reasoning.” – Little Richard

“People who like smack also like Lou Reed, and that can’t be anything in its favor.” – Lemmy, Motorhead

“I like Beethoven, especially the poems. ” – Ringo Starr, The Beatles

“A recording studio isn’t much different from a factory. It’s just a factory for music.” – Van Morrison

“The band’s name means the act of dying, but like, really mega!” – Dave Mustaine, Megadeth

“I’d rather be dead than singing ‘Satisfaction’ when I’m forty-five.” – Mick Jagger, The Rolling Stones

“I wish I could tell our audience that we don’t hate them without sounding cheesy.” – Kurt Cobain, Nirvana

“Achievement is for the senators and scholars. At one time I had ambitions, but I had them removed by a doctor in Buffalo.” – Tom Waits

I could go on for pages, of course, but then you might not go out and find this little gem. The Great Rock ‘N’ Roll Quote Book is as good a waste of a few bucks and a couple of hours as you will find anywhere. Go get yourself a copy and have fun with it.

I’ll leave you with this absolute flabbergast-er by one of the inimitables – He Who Should Be Sir – Keith Richards offers his critique of Led Zeppelin:

“I could never get along in a band with a posturing, posing lead singer.”