Our culture of spectacle is awful, terrible, no-good, very bad – how’s that for a newsflash…? 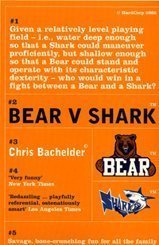 Chris Bachelder’s Bear v. Shark is one of those books that does what one of my teachers used to admonish his students to do: it articulates the obvious. In many cases that is a good thing, not a bad one, and this book is one of those cases.

The subject of Bear v. Shark is the devolution of American culture, and Bachelder does a decent job of articulating the horror that is our descent into trivialized celebration of the meaningless with his overriding meme – a sensationalized “battle of the ages” between a bear (type never denoted) and a shark (type never denoted). Part of the charm of wading through Bachelder’s book is his constant evasion of answering this question: What kind of bear is going to fight what kind of shark – and why should I care? That he gets us to wonder about this instead of immediately responding “What a load of crap this is” says good things about his talent as a writer. But it doesn’t help this book, published in 2001, from feeling dated.

Part of that dated feeling comes from reading a book that is so obviously a contrived homage to one who is surely in Bachelder’s pantheon of favorite writers: Kurt Vonnegut, Jr.  Stylistically, Bear v. Shark owes much – perhaps, too much – to the Vonnegut of the Slaughterhouse Five and Breakfast of Champions period. So reading the novel feels like stepping into a time capsule and being whisked back to some moment between 1969-1973. Vonnegut once described his writing style (I paraphrase) as writing a joke until he got it right, then writing another joke and another and another until he had a book. Anyone who’s read Vonnegut knows that that’s not quite the truth – but it’s reasonably close. The same is true of Bachelder; he writes joke after joke with, like his stylistic master Vonnegut, those few passages of dramatic action that convey a signal message of the book. It’s a wonderful, engaging style, and Bachelder does it well here – but it’s too Vonnegut. I kept waiting for Kilgore Trout to pop up. The setting, sometime in a near future America of nonstop infotainment, is also awfully Vonnegutian (Is that a word? Well, it is now.).

Certainly, given the recent publication date, Bachelder does a nice job of bringing to the table a number of issues afflicting our current culture: the debasing/devaluing of our most important duty as citizens by making trivial decisions matters of voting; the mindlessness of consumer culture and its seduction of everyone from children to the elderly; our wasteful use of environmental resources (the family in the novel the Normans – you’d be right in assuming that the name is a play on normal – drive an SUV); and most importantly, our obsession with being constantly amused (Bachelder quotes Postman numerous times in the text and Postman’s Amusing Ourselves to Death is a key source for the novel’s ideas about American cultural dissolution). These issues are illuminated sometimes with clever subtlety, sometimes a tad too stridently. One has to ask if even the most distracted father (and Mr. Norman is above all, distracted) would ignore his son’s serious head contusion to avoid missing the spectacle of a computer generated bear fighting a computer generated shark.

And maybe that’s where the novel goes a little off the rails for me. The premise is intriguing and the cultural criticisms, though sometimes too didactic, are certainly valid. But ultimately the novel lacks something that I don’t think any amount of cultural critique or jokiness can cover up – its characters lack humanity. The shallow, self-absorbed preoccupations of the Norman family – Mr. and Mrs. Norman, their sons Matthew and Curtis – are so off-putting that even when Curtis is injured jumping into his father’s arms to escape a vice squad raid on a cult determined to destroy the arena where the “bear v. shark” contest will be held (both are there because of their own foolhardiness, the most notable character trait of the family), what we feel most is – disgust for the wanton wastefulness of the business.

But maybe that’s what Chris Bachelder wants us to feel about his characters – that they are so controlled by infotainment addiction, consumption obsession, and self-gratification that they cannot rouse themselves to be humane – or human – to one another. That’s horrific – all the more so because it feels as if it could be true. So perhaps Bachelder means Bear v. Shark as a warning that our culture of distraction is destroying our humanity.

If so, he likely knows his warning has gone largely unheeded. If you don’t believe me, take a look around Sunday when the vast majority of Americans will be glued to the latest spectacle – Seahawk v. Bronco….