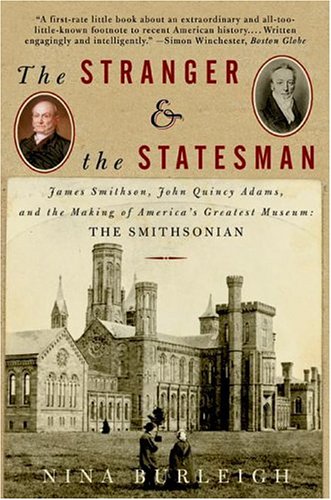 The Stranger and the Statesman by Nina Burleigh (image courtesy Goodreads)

The Stranger and the Statesman: James Smithson, John Quincy Adams, and the Making of America’s Greatest Museum is likely to cause many a thoughtful American  to spend some time wondering what in the hell America has ever been about, besides money and politics. This concise and highly readable book about the founding of the Smithsonian Institution takes on a puzzling and remarkable little piece of American history: why did the illegitimate son of an English duke who never married and whose career was spent as a “gentleman scientist” exploring obscure mineralogical questions, decide to donate his entire fortune (some $50 million in current money) to “the United States of America, to found at Washington, under the name of the Smithsonian Institution, an Establishment for the increase & diffusion of Knowledge among men.”

The truth is, he didn’t, exactly. Smithson’s bequest came to America because of “a series of unfortunate events” that included the unexpected and premature death of his sole heir, a nephew who was the illegitimate son of his brother, another illegitimate son of that same English duke and both James Smithson’s and his brother Henry Dickinson’s mother, one of the duke’s mistresses. His bequest also managed to fund the Smithsonian’s founding despite the best machinations of crooked members of Congress and the Cabinet (none of whom were ever prosecuted beyond a “slap on the wrist”) and despite the political machinations of Southern obstructionists led by John C. Calhoun who saw an eccentric Englishman’s gift for the founding of such an “Institution for the increase and diffusion of Knowledge among men” as expanding Federalism that might eventually lead to their giving up the “peculiar institution” that made them men of wealth and power – slavery.

This book points out two important lessons about America.

The first is that, for those from other lands, no matter what the truth is about us, we are somehow Winthrop’s “city on a hill.” The bulk of this book tells us about Smithson’s life, an interesting if sad one, punctuated by two pieces of information that serve as tantalizing suggestions for the “little Englishman’s” hopes for the United States: in his youth he went on a scientific expedition with one William Thornton, a young gentleman scientist like Smithson himself and an architect – the architect who would some years after that expedition design the U.S. Capitol. It is also quite likely (though has yet to be proven conclusively) that Smithson met Benjamin Franklin during that great American “natural philosopher’s” last sojourn in Paris. It is even possible that Smithson and Franklin could have corresponded. That’s something we will never know because Smithson’s personal and scientific papers were destroyed in a fire at the Smithsonian castle some 15 years after its founding.

The second important lesson about this country that one can gather from this excellent little history is that America’s anti-intellectual tradition is of long standing and is deep rooted. The machinations of men like Calhoun whose motivation was political (Obstructionism was the standard political practice in the decades leading up to the beginning of the Civil War in 1861 as the South did all it could to avoid having to change a single thing about its economic and social practices in the name of “states’ rights” and “freedom from Federal  tyranny”) while despicable, is explained by the political climate. The behavior of those who were simply crooks in high places like Ambrose Hundley Sevier of Arkansas and Treasury secretary Levi Woodbury (the characters behind that state stock scheme) merely reminds us that politicians are too often bad people. What is perhaps most maddening to ponder is this: most members of Congress – and their constituents – simply didn’t give a damn about “the increase and diffusion of Knowledge among men.” The resistance to doing anything that might enlighten, educate, or improve American culture made the realization of Smithson’s dream for America seem like an impossible one for about a decade.

And that’s where the other remarkable figure in this story of how America got its greatest repository of Knowledge comes in. That figure is Congressman John Quincy Adams of Massachusetts – son of the 2nd President, the 6th President himself, and, Burleigh argues, likely the most intellectual President the United States has ever had. It is Adams’ dogged determination to see Smithson’s money used for the purpose the scientist intended that eventually, after long wrangling, gets the Smithsonian re-funded after the legal embezzlement of Sevier, Woodbury and their cronies have lost the original monies and gets the Smithsonian established as a place of both scientific study and support and of, to borrow from Smithson himself, learning diffusion.

Anyone who has visited the Smithsonian knows that it is a remarkable repository of scientific, artistic, and cultural history for the United States. Where else could one see remarkable Native American artifacts and The Fonz’s jacket in one place? The fact that the former are preserved and cared for tenderly is a tribute to the kindness of James Smithson and the diligence of John Quincy Adams. The fact that the latter are most likely visited before the former by Americans who go to the Smithsonian is proof that money, no matter how well intended and spent, can’t buy everything.