Amazon loves Mrs. W, because she’s a sucker for those Kindle Deals of the Day, where you can pick up good stuff for 99p. And among her recent purchases has been Donna Tartt’s new book, The Goldfinch. I’ve haven’t read either of Tartt’s previous novels, although people have been gushing about The Secret History for years, but I thought I might read this one. And the reason for that is that The Goldfinch in question is a painting, in fact one of my favorite paintings. It’s that one right there. It’s a perfect painting—you couldn’t possibly improve on it.

It’s by Carel Fabritius, a Dutch painter who, like Masaccio, Girtin and Schiele, who all all died in their 20s or early 30s, left us tragically early. In Fabritius’s case, it was an explosion in a nearby building in the city of Delft in 1654 that did the trick. It leveled houses for blocks around, one quarter of the city, in fact. Fabritius left only a handful of paintings, most of which are in The Hague or in Amsterdam. The Goldfinch itself is a small paining, 13” by 9”, and I first saw it in The Hague years ago. It has stuck in my memory ever since. Here’s a sympathetic discussion of the painting and its place in Fabritius’s ouvre by Mary Tompkins Lewis. (It’s currently on loan at The Frick Museum in New York, and is now playing to record crowds, in part because of Tartt’s book.)

But there’s a problem. That painting up there isn’t really the Fabritius that I fell in love with years ago. Is it an imposter, a forgery? No. But it’s been cleaned and restored—a process that took place in 2003.  And it has changed the painting materially. What I haven’t decided is whether it’s an improvement or a detriment. But it’s different. It’s not my Goldfinch. My Goldfinch looks like this: 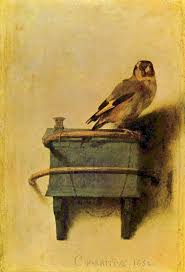 And I can’t get used to the new one. Maybe I will over time, but it’s been ten years, and I haven’t yet. I have no doubt that, as a number of critics and art historians have pointed out, we’re now seeing the painting as Fabritius intended—without the discoloration that accumulated over the centuries. And perhaps over time the two images will merge in my head so that what I preserve is some fusion version, leaving me dissatisfied with both the new and older versions I now carry around. But the reality is that, at present, there are two different paintings of The Goldfinch for me—the one currently hanging at the Mauritzhaus, and the one that used to hang there. And no matter how I try, I still can’t get over the fact that these are two different paintings.

Memory plays tricks. We all have moments when our memory gets tired, or sloppy, or just doesn’t work right. As I get older, forgetting names really is becoming something I’m noticing more than I would like to admit. But there are other times—like this one—where my memory is so fixed that it won’t be dislodged. The reality of what has occurred to The Goldfinch simply won’t impinge on the image I carry around. Is it because I think the older version is a more beautiful painting—that the coloring actually works better? Perhaps—but I’m not that sophisticated a critic of painting that I could actually explain that in comprehendible terms. Have there been other paintings where I’ve had similar experience? Not that I can remember. I never saw the Sistene Chapel before its restoration, so I can’t share in the frustration of those who believe the restoration ruined it. And generally, when I see paintings that I know have been restored, I’m generally appreciative of the fact that the paintings generally are brighter than before, if I notice the difference at all.

With The Goldfinch, however, it’s different. For whatever reason, this painting burrowed into my head, and remains there to this day. And it makes me wonder what other memories are equally resistant. It’s not that this is a false memory—the painting that I saw back in the 1970s is still the painting in my head. It was a real painting then, even though it no longer exists. Maybe that’s what I can’t come to grips with—that I’ll never see that painting again. It’s gone, and the only place it still exists is in photographs and older postcards and in my head. And that’s why I’m holding on to that image so tenaciously. So much of life is ephemeral, and it turns out that 400 year old paintings may fall into that category as well. But they’re not supposed to. Ars longa, vita brevis indeed. Like much else in life, ars sometimes isn’t longa at all—or at least as longa as we would like.