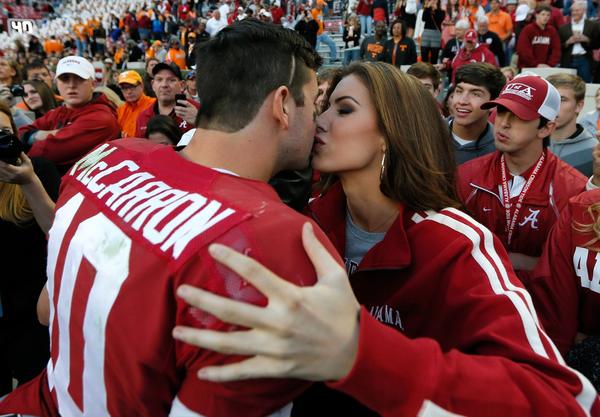 Shortly after yesterday’s epic Iron Bowl – I don’t use that word “epic” very often, but they’ll be talking about this one a century from now, assuming American football is still being played – I heard a pundit opine that Alabama quarterback AJ McCarron’s Heisman Trophy hopes were now dead.

Look, I hate Bama. I don’t give a rat’s ass about Auburn, but I wish they’d won by 100. Anytime Nick Saban goes down it’s a party at my house. That said, I watched the game and all I saw was one reason after another to vote for McCarron. The award is allegedly for the best player (assuming he plays QB, RB or WR), not the best guy on a team with a good kicker. If you would, point to the part where McCarron let his team down.

In addition. he launched the longest pass in Alabama history and generally had his way with the Barner secondary.

Then, of course, there’s this:

All told, McCarron’s all-time record as  starting quarterback drops to 36-3 with two national titles. If his coach had recruited a kicker he’d be odds-on favorite for a third national title in four years. All those folks who keep telling me that Tim Tebow is the greatest QB in college football history – blow me.

I don’t know a damned thing about McCarron past what I see on TV, and big money college ball being what it is I don’t kid myself that I’m talking about Mother Teresa. But he’s been, without argument, the best player on the best team in the game over the past four years, and if you think his performance yesterday diminished his worthiness, you need to reevaluate your standards. There was damned near nothing more anyone could have reasonably asked of the Bama QB.

If I had a Heisman vote it would go to AJ McCarron. I realize that there are other fantastic players out there and I can’t fault you for favoring one or the other among them. But if you think that somehow McCarron blew it with his performance yesterday, please do us all a favor and STFU.