ArtSunday: The art of the short story…

The short story as its own reward 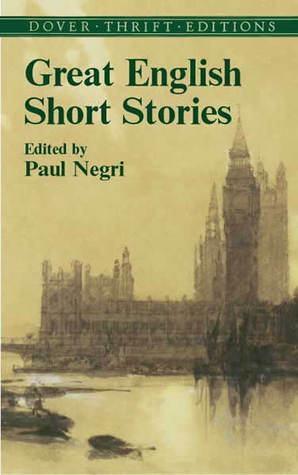 To paraphrase an old joke, dying is easy; writing short stories is hard. This review looks at a compilation from one of the budget publishers, Dover, called Great English Short Stories.

As you can tell by the cover, this “thrift edition” uses authors whose work has gone into the public domain. That is not a bad thing; the authors represented in this collection include some of the most revered writers of 19th and early 20th century English fiction: Charles Dickens, Anthony Trollope, George Eliot,  and D.H. Lawrence are represented, as are “genre writers” H.G. Wells, Robert Louis Stevenson, and M.R. James. Even some of those whose reputations once ranked high but whose stars have fallen from favor are featured: John Galsworthy, George Gissing, Rudyard Kipling, Wilkie Collins, and Saki all provide pieces.

What is interesting about this collection is this: it is a primer for teaching students or student writers about what one should or shouldn’t do when writing short stories.

So what do I mean by “what one should or shouldn’t do when writing short stories”? Well, let’s look at the “major” authors first. The collection begins with a disjointed, confusing “Christmas piece” (a type of story for which he was justly famous) by Dickens called “The Haunted House.” This story suffers from a common short story writing problem: it’s so long on exposition that the “setup” can’t possibly pay off – and it doesn’t. (And by the way – when an author announces to readers that a story is a Christmas story, maybe Christmas should play some role, any role, in the story.) Trollope and Eliot commit much the same crime as Dickens (too much exposition for too little payoff – although Trollope makes the mess work better). Lawrence’s “The Prussian Officer” works the best of this group, but it suffers from that “needs to be longer” problem that one doesn’t feel with pieces like “The Horse Dealer’s Daughter” or “The Rocking Horse Winner.” Lawrence’s usual psychological insight doesn’t quite get developed; we know the who, where, when, and what, but there’s a gap where Lawrence usually shines – in the why.

The “genre” authors fare somewhat better. Wells offers an interesting psychological horror story, though “Under the Knife” suffers from the need for a little trimming from an overlong psychological/dream sequence (he was going for something akin to Bierce’s “An Occurrence at Owl Creek Bridge” but he misses slightly). Stevenson’s historical piece has its speculative interest (François Villon is the protagonist), and its juxtaposition of traditional belief versus the iconoclasm of art is intriguing. James, a nearly forgotten author who specialized in the ghost story, offers the best piece of this group – it’s a lovely, tightly plotted Gothic tale about what can go wrong when amateur archaeology violates ancient sacred ground.

Those “fallen stars” I mentioned offer the best short fiction in this collection. Wilkie Collins, always good with the Gothic (The Woman in White) offers a story called “The Dead Hand” that uses the twist beautifully. And speaking of the twist, one of the two greatest masters (the other is, of course, O. Henry), Saki, is represented by one of his gems, a comedic/macabre little tale about a cat who learns to speak to humans called “Tobermory.” And both George Gissing and John Galsworthy offer slice of life pieces that reflect the interests they pursue in larger works – the struggle humans face to live true to themselves even as they try to make their ways in society.

So here’s a takeaway of sorts. Those “major” authors are all most famous for their mastery of novels. The skills needed for that much longer form (think for a moment about the length of the typical 19th century novel) don’t translate readily (though I know these authors have successful short stories to their credit) to the concentrated form of the short story.  That would explain these less successful efforts.  The Dickens, Trollope, and Eliot stories are too much like parts of longer works, almost unconsciously so.

But equally likely is this: the writers of the most successful stories in this collection wrote stories to support themselves at times in their careers. There’s something to be said for practicing an art form – it will bring a level of mastery. Stevenson, Gissing, James, Kipling – all these writers have an innate sense of short story form that a reader senses immediately.