ArtSunday: In any time: the Hemingway style I read and reviewed Hemingway’s final book, True at First Light, back in February. In that review I talked about the issues surrounding Hemingway as writer and Hemingway as media creation. One characteristic of the Culture of Media-Driven Celebrity – as we might arguably call the 20th century – which has been noted by media critics such as Simon Frith and Clive James is the tendency (perhaps an aim, conscious or unconscious) of media to undercut artistic achievement by focusing on – and worse, overemphasizing – the celebrity that attaches to a successful writer/artist/musician rather than on the writer/artist/musician’s accomplishments in their field. That undercutting has been one of the tragedies of our time. It makes the task of understanding achievement in the arts (and other fields – let us not ignore celebrity’s effect on scientists such as Einstein or Sagan, for example) more complicated; it also creates an environment where even the most dedicated achiever feels pressure to maintain celebrity status. In too many cases, especially as media has come to dominate how we understand our world, the Culture of Media-Driven Celebrity has made us lose sight of WHY achievers deserve their celebrity.

Having looked at Hemingway at the end of that long road from driven, daring artist writing in what was a new style that made him famous to tired “celebrity author” trying to find his way back to that young lion, it seemed logical to me to examine the book that first brought him significant notice as a writer. I found myself drawn to do this for two reasons: first, to see if the fame that accrued to him over the span of those early works – the collections Three Stories and Ten Poems and In Our Time, and (for me) his finest achievement in the novel,The Sun Also Rises – was/is deserved; second, because I have long thought of Hemingway asmy own stylistic master, I wanted to examine Papa’s admired/imitated/parodied writing style one more time to see if my admiration for and attempts to emulate the master’s skill were justified. 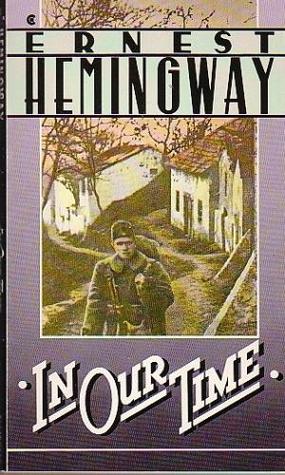 Cover, In Our Time by Ernest Hemingway (courtesy, Goodreads)

I didn’t read all three of the above mentioned works. I chose In Our Time for a simple reason: The Sun Also Rises is too well known; Three Stories and Ten Poems is too obscure. That left In Our Time, a work with both well known Hemingway stories such as “Big Two-Hearted River” and “Cat in the Rain” as well as more obscure pieces such as “Out of Season” and “The Revolutionist.”

It would be easy for me to talk about the greatness of “Big Two-Hearted River”; my own bias for trout fishing would make it a natural – and it certainly lends itself to looking at how cleanly and powerfully the minimalism of Hemingway works. But that seems too easy.

So let’s look at two other examples – first, from a powerful story from early in the collection, “Indian Camp.’ The story concerns both birth and death – and the relationship of a father and son. A scene at the end of the novel – a powerful discussion of suicide which resonates eerily if one knows the Hemingway family history – is captured in a few terse sentences:

The Hemingway style – near cryptic without being so – is admirably suited to dialogue. But, as the opening of “Soldier’s Home,” my personal favorite of all Hemingway’s stories, demonstrates, it works for description and narration as well:

“Krebs went to the war from a Methodist college in Kansas. There is a picture which shows him among his fraternity brothers, all of them wearing exactly the same height and style collar. He enlisted in the Marines in 1917 and did not return to the United States until the second division returned from the Rhine in the summer of 1919.

“There is a picture which shows him on the Rhine with two German girls and another corporal. Krebs and the corporal look too big for their uniforms. The German girls are not beautiful. The Rhine does not show in the picture.”

One learns much about Krebs in these few sentences. He was one person before the war – another altogether after. His war experience, as we learn, was boredom punctuated by terror, to paraphrase Twain. And upon his return to his hometown he cannot find a way to make himself fit into the life he has returned to.  The war has clarified what matters and what doesn’t for Krebs. Brilliantly, Hemingway encapsulates this with a simple description of Krebs’ view of love:

“Now he would have liked a girl if she had come to him and not wanted to talk. But here at home it was all too complicated. He knew he could never get through it all again. It was not worth the trouble. That was the thing about French girls and German girls. There was not all this talking. You couldn’t talk much and you did not need to talk. It was simple and you were friends.”

Krebs (and we) know that such clarity and simplicity in world view will never work unless he escapes the complicated expectations of home. The story ends simply:

“So his mother prayed for him and then they stood up and Krebs kissed his mother and went out of the house. He had tried so to keep his life from being complicated. Still, none of it had touched him. He had felt sorry for his mother and she had made him lie. He would go to Kansas City and get a job and she would feel all right about it. There would be one more scene maybe before he got away. He would not go down to his father’s office. He would miss that one. He wanted his life to go smoothly. It had just gotten going that way. Well, that was all over now, anyway.”

It is easy for us now, nearly 100 years later, to look at Hemingway’s spare prose and fail to give him the credit he is due. But as these examples from his first great work demonstrate, his focus on “getting the words right” made him a master deserving of his fame.

And deservedly, if sadly, a celebrity whose fame became too great a burden.