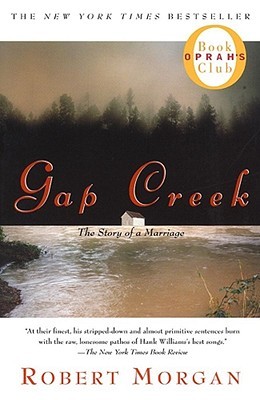 Robert Morgan’s Gap Creek is subtitled The Story of a Marriage. This latest entry from the extended 2013 reading list is certainly that. It is also an engaging depiction of an era, a life, and a region.

There are two issues to talk about with this book. The first is the writer’s accomplishment, his execution of his artistic vision. The second is the book as product – product to be marketed, promoted – in truth targeted based on a considerations of audience demographics. This second issue, of course, raises a question about art’s purpose. Despite its simple, heartfelt charm, Gap Creek has a feeling of calculation, of writer being guided by agent, editor or other “professional” with an eye on sales first and foremost.

First, the accomplishment – an admirable one.Gap Creek tells the story of a young woman named Julie Harmon who is living a hard scrabble farm life in the North Carolina mountains. The sudden death of her brother (the baby and only boy in her family), followed shortly after by her father’s passing, places a strain on her family’s situation. Her own unlikely, and sudden, marriage seems yet another jolt to the family’s stability. But the novel shifts, a little abruptly at this point, to the story of Julie and her husband, Hank Richards and we hear of the Harmon family indirectly for the most part after this event.

Julie is a “worker”: she is at her best when working – or planning work. Deep thinking is not her strong suit – but she has a wonderful heart and willing hands. Her husband Hank, who changes profoundly over the course of the novel, seems at first just the sort of strong young man Julie has imagined would make her a good husband. But he has maturity problems (as does Julie, though her dogged nature serves her well as leavening for her occasional adolescent foolishness – she is only 17 and Hank but a year or two older) that lead to problems in both his work life and home life.

Through difficulties domestic (the loss of a child, Hank’s poorly controlled temper, his seemingly childish  flirtation with Julie’s sister Carolyn), economic (their landlord dies and they are cheated by imposters posing as his heirs as well as ultimately forced to vacate their home just as they have made the farm successful), and natural (a mountain flood nearly kills them) Julie and hank’s relationship stumbles along. At one point (during that flood) Hank is so emotionally overwrought – frightened, really – that he comes close to killing Julie and himself. But finally, after their baby has died, through the kind offices of a local minister and his wife, both Hank and Julie find community, compassion for themselves and others, and faith that allows them to face even the cruel irony of losing the home they have rebuilt after all their catastrophes with renewed love for each other and commitment to making a life.

Morgan himself is a highly regarded poet and deservedly so. The story, told as a first person narrative by Julie, is marked by both simple language and quiet dignity. We believe the narrator because, thanks to Morgan’s remarkable skill at capturing both the thinking and speech of the North Carolina mountains where he grew up, she speaks in a voice that rings with truth.  As a piece of writing Gap Creek is the fully accomplished work of a gifted author.

So why do I feel the need to carp? Believe me, it’s not because Oprah picked this for her book club and ignored my work.  I don’t mind not having written stuff that the Oprah crowd approves.

It feels, though, that there’s something…calculated about this novel. Morgan says in a brief afterword (that comes after “Oprah’s Book Club” discussion questions in the edition of the novel I read) that he loosely based his book on the first year of marriage of his maternal grandparents.  I don’t doubt that part of the story. Where my crap detector starts to ding is in the construction of this work.

Julie and her sisters seem contrived – backwoods versions of the March sisters from Little Women. The character of Carolyn, the flirt, is Amy. Rosie, the most serious and domestic, is Beth; Lou, the sincere one, is Meg. And Julie, the most forthright and activist, is, of course, Jo. Hank Richards has many of the characteristics of Laurie Laurence – including his impulsiveness and temper.

I don’t think this is over-reading the text. Morgan’s career as a poet has been distinguished, but being a poet in America is not, as a friend of mine has noted, where the big bucks are.

But you know what? Over the last 30 years books with women protagonists (mostly by talented women writers as here and here, though some men writers have farmed this ground, too, as here and here) have been the genesis of serious (and ridiculous – in more ways than one ) fiction sales by Southern writers, particularly NC writers. Even this qualifies, despite claims to the contrary.

This is writing to a target market.

And so Robert Morgan’s agent – or editor – or somebody – convinced him that he should write a novel that would appeal to readers who like books with women protagonists: ergo, a novel about a woman who undergoes heartbreak but who comes through and is all right in the end. A book that Oprah, doyen of literature for a wide audience, would recommend to her millions of adherents.

In other words, chick lit – the overwhelming reading preference of Oprah’s crowd.

It is a tribute to Morgan that he could take this marketing directive and turn it into a beautifully written, memorable work. Gap Creek is that, as I have, I hope, noted clearly. And I’m glad that Robert Morgan could have financial success – as a wonderful poet he deserves any and all kinds of success, including financial.

It’s a little sad, though, that he had to go the Oprah’s Book Club© chick lit route to get it.