As with Iraq, we’re casting due process aside in the rush to judgment. 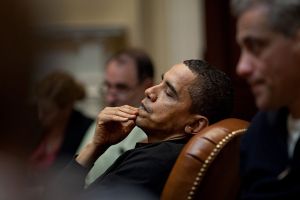 For once, the views of the New York Times editorial board and Focal Points align perfectly. From an op-ed today

Despite the pumped-up threats and quickening military preparations, President Obama has yet to make a convincing legal or strategic case for military action against Syria.

Where, the author asked,

… is the proof that President Bashar al-Assad of Syria carried out the attack?… If the Obama administration has such evidence, it should make it public immediately. Given America’s gross failure in Iraq — when the Bush administration went to war over nonexistent nuclear weapons — the standard of proof is now unquestionably higher. We are also eager to hear the conclusions of the United Nations inspectors who are in Syria taking samples from victims and interviewing witnesses.

Meanwhile, in a post Monday, I wrote of Syrian President Assad:

While it’s doubtful the opposition launched the attacks, one can’t help but wonder if, directly or by discrete suggestion, he delegated such authority to generals in order for him to maintain plausible deniability. If cornered, Assad can claim rogue elements of the military were responsible and, without immediately naming names, promise to investigate.

And yesterday I quoted David Gardner of the Financial Times (behind a pay wall) (emphasis added):

… many Syria-watchers are still puzzled as to why the Assads would do this. After months on the military ropes, they are on a roll. Since the fall of Qusair in June, and the recapture of the Homs Gap in an offensive led by Hizbollah, the Iran-allied, Lebanese Shia paramilitaries, Damascus has gone on the offensive. The overt commitment of Iran and Hizbollah, along with Russia’s diplomatic shield at the UN Security Council, shows that the Friends of the Assads deliver.

Curious what Gardner meant by the Assads in the plural, I joked that maybe he consulted with his wife Asma on chemical-weapons attacks. But now I see he must have meant the president’s brother. Bloomberg News reported yesterday:

Maher al-Assad, the younger brother of the president, commands the regime’s Republican Guard and controls the Syrian Army’s 4th Armored Division, an elite unit that the opposition says launched the Aug. 21 attack on the eastern Ghouta suburbs of the capital, Damascus.

The use of chemical weapons may have been a brash action by Maher al-Assad rather than a strategic decision by the president, according to the UN official, who asked not to be named.

Some worry that hitting chemical weapons depots or factories may hurt or kill large numbers of innocents if the chemicals are released into the air by exploding missiles. … [Chris Harmer of the Institute for the Study of War] says he’s not particularly worried about chemical collateral damage; the worst of the weapons, like sarin, are stored in “binary” format, with their chemical pre-cursors in separate units. … “There may be some collateral damage [in a strike destroying such weapons], but far less than use of chemical weapons” by the Assad regime.

Even if the number of people killed by the release of toxins from a U.S. airstrike is relatively small — and relatively might be the key word here — compared to the numbers who die when Assad uses his chemical weapons, the PR catastrophe that would result from Syrian civilians dying from a U.S. airstrike meant to protect them from chemical weapons would be pretty awful.

In the end, it’s tough to argue with this prescription from the Times op-ed:

Ideally, once presented with evidence, the council would condemn Mr. Assad, impose a ban on arms shipments to Syria (including materials used to make chemical weapons, which the regime is trying to buy on the open market) and send Mr. Assad’s name to the International Criminal Court for prosecution.

Mr. Assad’s Russia and Chinese enablers are the ones most able to stop his brutality.