HobbyWeek: Digging up the Dead

The central figure here is not an idiot or moron. The idiotic expression was produced by a sudden poke in the middle of my back by Uncle Will’s thumb and the reaction was almost fatal. The family tries to suppress this picture, but I mean to keep it alive as long as I am alive. I, Emmy, have spoke this. 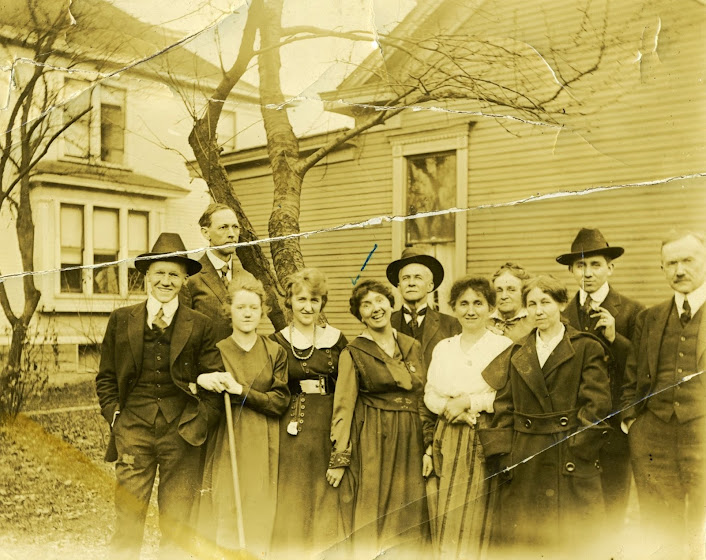 It began with a photo that I found in the mid-’70s. My Aunts Jo, Marion, and Rose took my mom and me to the Neely house in Rayland, Ohio to see if there was anything there that we wanted as it was being cleaned out so that my cousin could rehab it for her family. We found lots of antique glassware, my great-grandmother’s rocking chair, and lots of other fascinating, filthy items that just had to be saved. Somewhere, I picked up a sepia-colored photograph–bent, repaired with tape, and absolutely fascinating. The quote at the beginning was written on the back and the white house to the left is where I found it. I tucked it away in an envelope to await the day that I could afford to have someone restore it.

My dad told me that the note was written by Aunt Emmy, who I had met when I was very young. She didn’t marry until she was 60, and then her husband died after ony a year and a half. She spent her last years in a nursing home in Wheeling, West Virginia, called Altenheim. The name on the sign was written in very fancy script and was hard to read. One day a young couple stopped by, parked and approached the porch where Aunt Emmy was sitting. “We’re here to see the antiques,” the man announced. “Well, you’re looking at one of them,” Emmy replied. I had a hero. I also had a model for aging well.

That photo sat in its envelope for decades, moving with me from apartment to house. I heard more Emmy stories. I also heard stories about her brother, Wink. How he took a bus out to Kansas in the 1920s and bought a plane. The seller spent a couple of hours teaching Wink how to fly it, and then Wink flew it home. To Ohio. By himself. This is the same uncle whose ship was sunk by a German U-Boat before the US got into WWI. The Germans were very polite about it. They surfaced and signaled their intention to the merchant vessel, gave the crew time to get into life boats, and then torpedoed the ship. Oh, the Germans came back with food and water for the crew. They didn’t want to kill the Americans, that might bring the US into the war too early. Uncle Wink, with the big grin on his face, stands to the far left with my paternal grandmother. His real name was William Winslow, named for the mischievous Uncle Will with the errant thumb.

But, in the end, it wasn’t the stories that compelled me to start seriously putting together the pieces of my family tree. That took the death of my father in 2010. All of a sudden, the stories stopped. I felt compelled to record what I had heard and connect the dots. I had to pick up Emmy’s torch.

There are two things in my background which make genealogy a natural rabbit-hole for me to fall down. The first is that I majored in and taught history. I was influenced by my Uncle Jack, a priest and historian who told the best stories about long-dead cardinals. The second is that I love a good mystery. Add to that a strong streak of perseverance (instilled in me by my father) and and a real curiosity about anything in my background that might explain how and why I ended up as me. In other words, how far did the apple fall from the tree?

There are two main mysteries over which I have been pondering. The first involves a letter to my paternal grandmother and the second involves the death of my great-great-grandfather during the Civil War.

The letter is a one-page typed document, written by my grandfather (nicknamed “Teeny” since his childhood) to my grandmother, Jeanne, who was visiting her ailing sister in New York in March or April of 1930. He had, according to the letter, recently been fired from his job and was still angry about it. It sounds as if there was some sort of scandal: 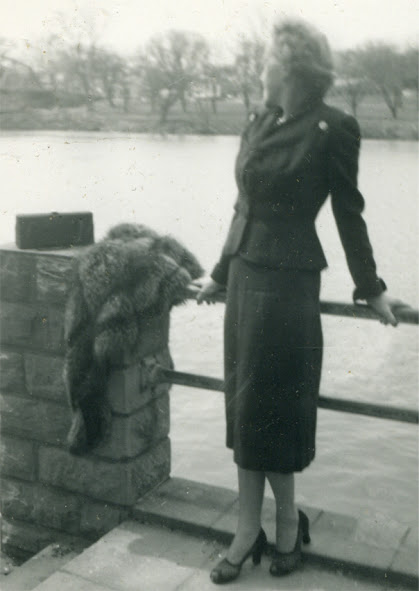 The methods pursued in my release were positively rotten, and don’t think for a minute that I have been keeping quiet about it. I haven t [sic] the first person yet to say that they were justified in their action. . . . I am getting sick of talking about it to people it doesn’t do any good, I want a little action. . . .

So Good Night Darling and don’t worry every thing will work out alright, someday, We will have the pleasure of watching somebodyelse squirm.

Here’s the kicker, on the outside of the envelope, in my grandmother’s handwriting are these four lines:

At that point, my grandparents had been married less than 6 months and the Depression had started. Within eight years, at age 36, my grandfather would be dead from cirrhosis of the liver. By the time my dad was two, he and his older brother slept at their grandmother’s house most nights. There are no photos of my grandfather except for a tiny photo of him as a toddler pasted into the family Bible. 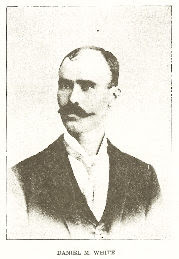 The second mystery involved Teeny’s dad, Daniel, who had been orphaned in the 1860s before he was six years old. His parents, Aaron and Isabel, married sometime in the 1850s and had three daughters before the Civil War started. They lived in what was called District 44 of Virginia–today it’s called Triadelphia, a town to the east of Wheeling, West Virginia. I’ve found Aaron’s parents and siblings. I know that some of his brothers, his father, and at least one uncle joined a Union regiment in the part of Virginia that seceded from Virginia to become West Virginia.

Aaron was 28 in 1860, Daniel was born in 1863, so Aaron lived until some time in 1862, at least. I can’t imagine that he did not fight in the Civil War. But I have no idea what happened to him or to Isabel. Granted, that part of Virginia/West Virginia was dangerous–there was a lot of internal turmoil and Confederate raids. Perhaps they took the children to live elsewhere, were killed in a raid, died of disease, or maybe a combination of those. Perhaps Aaron died on the battlefield. Daniel and one of his sisters show up in the 1870 census records, orphaned, more than a hundred miles away in Donegal, PA on neighboring farms. Eventually they returned to the Ohio Valley, across the river from Wheeling.

Of course it turns out that some things you heard about your family while you were growing up were wrong.

My dad’s family has the rumors of famous ancestors. We have one near-miss: the one of the earliest arrivals was a younger brother of Edward Winslow, he of the original Pilgrims on the original voyage of the Mayflower. The other rumor is that we’re somehow related to Oliver Cromwell. Great, some people get Jefferson, I get a Roundhead. I am happy to report that, aside from a handwritten note on an old family tree, there is no evidence to support this.

In the course of my research, I’ve connected with a distant cousin in central Ohio. She was tickled to learn that I knew that one of our grandfathers had married 2 sisters (sequentially, the first died, no bigamy, so far) and that the sisters were listed under several different names because of their various marriages. 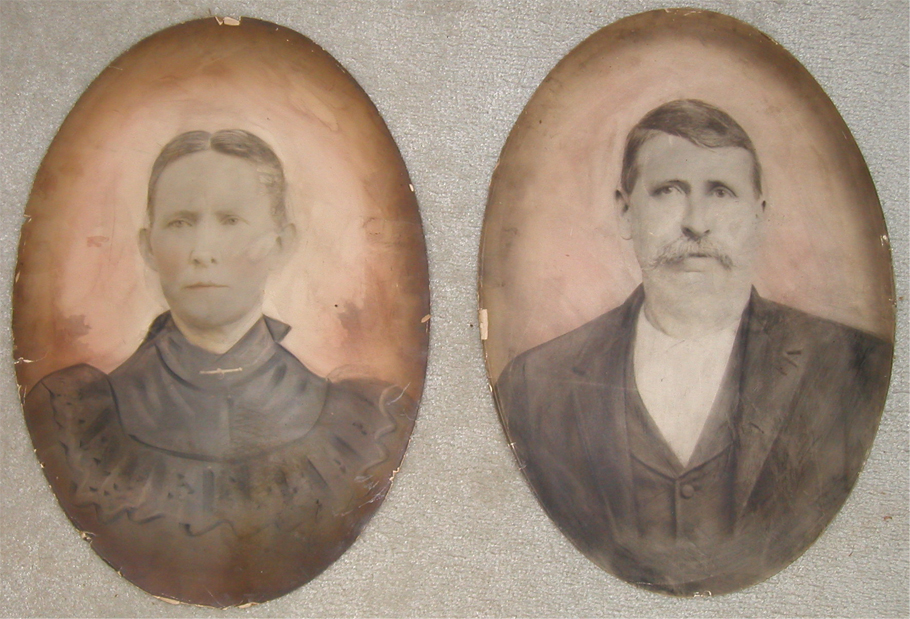 It took me several years to locate two individuals whose portraits I photographed at my Aunt Geraldine’s house before she passed away. I spent an afternoon scanning photos and making notes on who all of the people were. Finally, she retrieved two pastel portraits on convex drawing board in ancient oval frames. I was allowed to remove them from the frames for photos. She said, “Those are the Reaves.” I couldn’t find any Reaves on my mother’s side and they weren’t too many generations back. Then one day I tripped over them. Well, I tripped over their daughter, anyway. I think the portraits I have are too old to be my great-grandfather and mother. One of these days I’ll find their names, too.

My Aunt Jane let me borrow a suitcase that was found in the attic of her old house. It turned out to be full of photos and letters from my paternal grandmother’s family. That’s how I found the Mysterious Letter. There was also a collection of postcards from various southern hotels my uncle stayed at in the 1950s. A 1941 George McQuinn baseball card. An envelope containing 3 curls cut from my dad’s hair when he was a year old. Dozens of handwritten deeds. A box of family letters. Lots of envelopes full of negatives.

And at the bottom of an old box of assorted chocolates, in two pieces, was a glass negative. The only one I found. It was Emmy’s picture. Turns out that it scans beautifully. I haven’t had a chance to restore the image yet. But I can see that I didn’t do too badly with the first one, especially where I had to improvise (for example, creating Uncle Paul’s jaw line that had been obliterated by a fold). Of course I have to restore it. Emmy would want it that way.

I mean to keep it alive as long as I am alive. I, Cat, have spoke this. 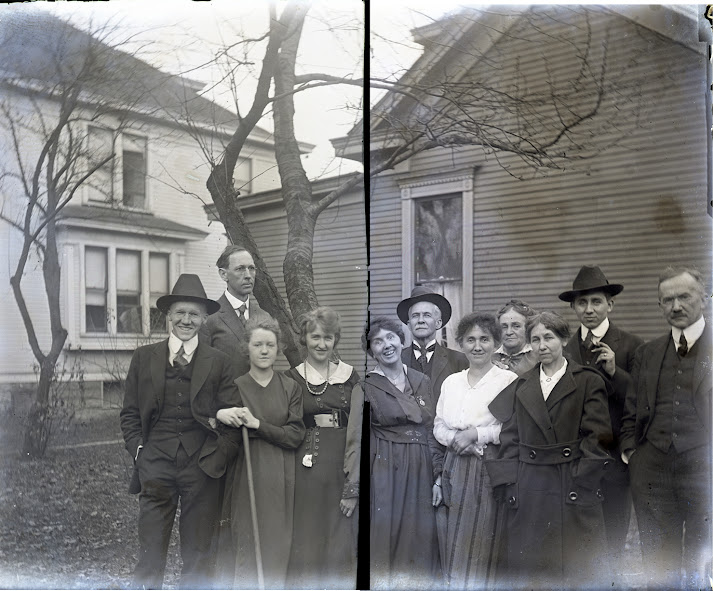