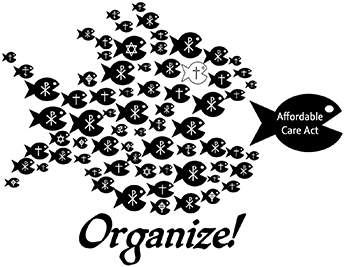 On July 2, America’s real Independence Day, by the way, leaders of a number of churches that doctrinally and theologically do not usually see eye-to-eye gathered at the National Press Club for a “religious liberty” press conference to announce their collective effort to trample individual religious freedom. They released “Standing Together for Religious Freedom: An Open Letter for All Americans.” The signatories to the letter included leaders from Catholic, Evangelical, Mormon, Lutheran, and Jewish organizations and denominations, as well as academics and various values-oriented groups, such as Focus on the Family and the Family Research Council.

The point of their letter and presentations is that the Obama Administration and the Department of Health and Human Services are violating the First Amendment’s Free Exercise Clause by requiring insurance companies or administrators to provide birth control coverage in separate policies to persons covered by policies paid for by religious institutions opposed to contraception. In the “Standing Together” letter, the objection is described this way:

Very simply, HHS is forcing Citizen A, against his or her moral convictions, to purchase a product for Citizen B. The HHS policy is coercive and puts the administration in the position of defining–or casting aside–religious doctrine.

In short, the heads of some major conservative religious institutions believe that their right to freely practice their religion trumps an individual’s right to not have religious doctrine forced upon him/her.

The “product” that “Citizen A” is being forced to provide is health insurance, which does not violate the tenets of any known denomination, not even Christian Science. A wall has been proposed by HHS to provide separation of church and contraception, but that apparently is not sufficient. It will only be substantial enough if it imposes religious doctrine on employees of religious-affiliated institutions, regardless of the religious leanings of the employees (or lack thereof). And, let’s face it, we’re talking primarily about women’s use of contraception.

One more point: no one is forcing “Citizen B,” the employee, to buy anything. If the religious doctrine in question, a ban on some or all forms of artificial contraception, is truly compelling for the employee, then that should be sufficient for that person to adhere to the prohibition. But, it’s not. In fact, this prohibition does not convince a majority of any faith to eschew contraception (across the US about 60% of sexually-active women use contraception), much less its employees. Perhaps this is a way to attempt to control the behavior of at least some people associated with institution, since members of the flock don’t always toe the line.

But I digress–I wrote about much of this in a recent post on Hobby Lobby and its claim of religious freedom (which, by the way, the “Standing Together” letter implies support for, “we call upon HHS to, at a minimum, expand conscience protections under the mandate to cover any organization or individual that has religious or moral objections to covering, providing or enabling access to the mandated drugs and services.”) [emphasis added]

What’s really interesting is how groups that would not otherwise get along, come together in the name of power and politics.

Let’s start with the Lutheran Church–Missouri Synod. They oppose interfaith prayer and worship to the point that LCMS pastors were chastised for participating in interfaith services after September 11 and the Newtown shootings. But apparently it was alright, in this case for the president of the LCMS to band together with representatives of the Catholic Church, despite the LCMS aversion to such churches that “attach spiritual or eternal rewards to the works or virtues of men.” This harkens all the way back to Luther and the 15th century argument over whether men are saved by faith alone or through faith and action.

We also have Catholics and Pentecostals sharing the stage. Traditionally, they question each other’s practices. Catholics find the symbolic communion and baptism of Pentecostals wanting. Some Pentecostals, like some Baptists, question the very existence of the Catholic Church and go so far as to call it anti-Christian.

And everyone, despite their past criticisms and questions about its very nature, is willing to partner with the leadership of the Church of Jesus Christ of the Latter Day Saints–Mormons–to build a bigger coalition against the contraception mandate. Just as Evangelicals and Southern Baptists were willing to endorse Mitt Romney, they are now willing to work with the denomination that was once labeled a “cult” because it suits their purpose.

Speaking of cults, nearly all of the churches “Standing Together” consider the Hare Krishnas to be a cult, calling it variously “sinful,” “deceitful,” etc. Some dismiss it as paganism or “just a Hindu sect.” However, for the purposes of defeating the contraception mandate in the name of “religious freedom,” the International Society of Krishna Consciousness is included. In fact, they seem to be the only non-Judeo-Christian faith to join the group.

Add to that the fact that various Christian denominations that promote the belief that, “I am the way, the truth, and the life; no man comes unto the Father, but by me” and yet are willing to share the stage with Jewish leaders who do not share that view.

My dad was a very thoughtful man–and also a very skeptical one. He was especially skeptical of Big Business and Big Religion. He said on numerous occasions, “Sometimes things just don’t make sense until you add money into the equation.” I don’t know if he was familiar with L. Ron Hubbard’s line, “If you want to get really rich, start a religion.” But I wouldn’t be surprised if he were.

These religious leaders are joining together to gain power and influence. Dating back to the 1980s, conservative Christian groups (primarily Protestants), banded together to exert influence over policy and elections. But as the religious landscape in the US changed, the coalition had to change as well. The tent, as they say, had to get bigger and more inclusive of religious conservatives from different faiths and denominations. The trend towards more overt involvement in politics by religiously-affiliated groups started after the Clinton administration and it shows no sign of slowing. What the individual religions cannot do on their own, they hope to do by joining together to put the combined weight of their membership behind their policy push, sort of a faith-based cartel. A pseudo Big Religion.

Some Big Businesses, who have no religious limitation on their political activity (and Citizens United to provide them with free speech), already strive to have a maximum impact on elections. Imagine the possibilities if Big Religion and Big Business combining to increase each other’s influence over policy and daily life.

Some people argue that anyone who goes to work for a religiously-affiliated institution has to expect to toe their doctrinal lines and if the employees don’t like they, they can quit and find another job. But what if all businesses are granted the ability to impose the religious beliefs of their owners on the employees?

And what better starting place than with something as innocuous as contraception?