Unsolicited museum review: The Timekeeper Project at the Petrie Museum

So on Saturday we decided to visit the Petrie Museum, one of the few museums in London we hadn’t been to once in the fifteen years we’ve been here. A grievous oversight that clearly needed to be rectified, especially given the Ra festival that was going on that day. So after a quick stop at the festival, great fun and great food, we headed off to the Petrie. This is a museum primarily of Egyptology, and the collection, a world class one, would be a premier attraction in any other city in the world. In London, alas, it’s shoveled into a couple of large rooms in the bowels of University College London. No matter—it’s there, and it’s free, and it’s worth a visit in its own right. The next time the grandkids are visiting, we know right where to go.

But that’s not all. Because the Petrie has something very interesting going on at the moment. It has an artist in residence, Cathy Haynes, who calls herself the Timekeeper in Residence. She has mounted a hugely interesting exhibit, to accompany a hugely interesting program she is running regarding the nature of time—how we perceive it, how it’s been perceived through the ages, how we objectify it, how it affects us. Perfect for an archeology museum full of Egyptian antiquities, you might think—and you’d be right. There have been a series of events this spring, many of which have been collected and are available on the exhibit’s website. Haynes has done an admirable job of moving the topic right along—there were two interesting –looking panel discussions, a number of interviews, one tour already, and a walk scheduled in July (“London in Slow Motion”) that looks fantastic (and is already fully booked, sadly.) Haynes also has provided us with some enlightening commentary. Really, all museum exhibits should be this thought provoking. Fortunately, the exhibit runs through August 2nd, so you’ve got time, so to speak, to still catch it.

Much of this relates to how we organize our categories of time. This question is, one suspects, of more than passing interest to a museum. Most of us now live in a world where time is conceived of as liner and directional—like an arrow, in fact. Or a river. And this metaphor is a powerful one. It’s come to dominate our thinking of progress, for example (in spite of the attempts of some very smart people, like Robert Nisbet and John Gray, to disabuse of us of some of the more simplistic formulations of this notion.)

But as Haynes shows and tells us, this isn’t the only view of time that one can have—or of progress, for that matter. In fact, in Haynes’s telling it’s a relatively recent one. It’s even more complicated than that. Does the universe have one clock? Well, no, as Einstein showed us, or at least not just one–and as modern physics continues to explore the fourth dimension, it may be that there’s actually aren’t enough clocks. And then there’s Walter Benjamin’s Angel of History, where the linearity of time and progress get inverted in an interesting way. And, for all of our increased precision in the measurement of, and objectification of, time since the mid-18th century, there’s still Henri Bergson telling us that time isn’t really measurable at all—it’s an illusion. Something the ancient Egyptians might have agreed with, even though they drew their sense of time from the yearly fluctuations of the Nile, had multiple calendars, and were the first culture, so far as we know, to actually measure time (and to build devices to do so.) For the Egyptians, as for many ancient and/or pastoral people, time was repetitive in a way that modern urban culture is not. 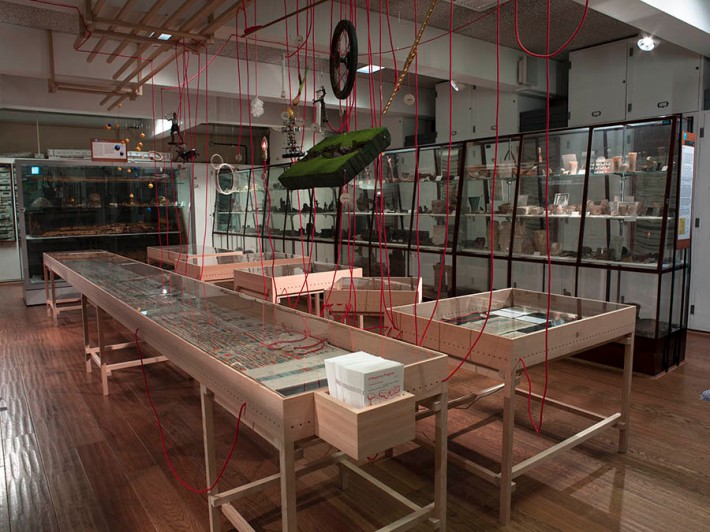 Hayne’s current exhibit, called A Storm is Blowing, is intriguing. It’s a 3-D sculpture/diagram/diorama with 35 objects, all linked to each other by a bright red cord, or to artifacts in the museum itself, representative of various ways of looking at, even objectifying, time. (My favorite is The Beast—you’ll understand when you see it.) Some of the connections are straightforward, even obvious. Time flies like an arrow.* Some are surprising. Snakes and Ladders, a board game popular here (which I knew as a sprout as Chutes and Ladders in the US), is actually derived from an Egyptian board game, in the form of a coiled snake. And the Egyptian version was actually about life as a game. Some of our conceptions of time are indeed circular, as it turns out. The Egyptians, to take a convenient example, had a more nuanced view to time that encompassed linearity, but had a much broader range of possibilities. And there’s an absolutely wonderful 5-metre chart from the 1890s with the entire history of the world as one long line of progress, right up to Queen Victoria, with an underlying motif of time as a river. Haynes points out that, as per Anthony Grafton and Daniel Rosenberg, the time line as we understand it is an 18th century invention.

There’s much food for thought here. By sheer coincidence, I have been going through the books of Robert Holdstock’s Mythagos series, in which Holdstock has created a “magical” wood in the middle of an English forest where imagining and mythmaking create another forest—one where time moves at a different pace entirely. Time travel is, of course, a favorite theme of fantasy and SF writers, and Holdstock follows a long and venerable tradition. But this isn’t time travel, exactly; it’s more the ability (to the extent that any of the characters really has it) to move back and forth between these different regions of different flow of time simply by walking along paths that crop up from time to time—usually holloways. Not a new theme, of course, but in its own way a radical (and very satisfactory) retelling of any number of British myths.

Ultimately, we reach a point where the question of a past becomes genuinely problematic. Time, as we inhabitants of modern culture understand it, always has a past. It comes with the territory. But what if we had no past? When was the past invented? Surely one of the early hallmarks of human culture was the creation of a past, as imaginary, chaotic and mythical as it initially may have been. But this past, in early human societies, may not have necessarily been simply linear, as the ancient Egyptians demonstrate. Even now there are still cultures for whom the most relevant measure of time is the season.

So congratulations to Haynes for a terrific exhibit—we’re going back after some digestion of all of this. And thanks to the Petrie for giving Haynes the space to put on one of the best shows we’ve seen in some, ahem, time. It does what every museum show should do–enlighten, entertain, and leave you asking questions. Of course, it’s all relative.