Mark Udall: working hard to fly a drone up the ass of every American 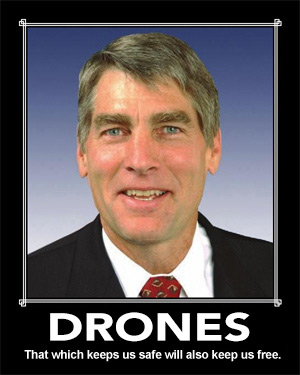 We’ve had some issues through the years with Colorado’s BiParticrat Senator, Mark Udall. He’s worked hard to cultivate a reputation as a guy who’s looking after our civil liberties, and his chief tactic in doing so has been an insistence on no-nonsense, pro-rights policy a nigh-Cirque du Soleil-esque commitment to misdirection, sleight-of-hand, obfuscation, backpedaling, smoke-blowing, singing in tongues and tapdancing. Recall, if you will, his silver-tongued bullshittery back in 2008 when I wrote him about his anti-Constitutional collaboration with the Bush administration over FISA. I don’t know who his Propagandist-in-Chief is, but his/her gift for doublespeak could, in a month or two, transform Charlie Sheen and Paris Hilton into poster children for abstinence.

Now Udall is on the stump for domestic drones, and again, he’s waving the bright shiny with one hand while he fishes the Vaseline out of his pocket with the other. See, the thing is, he wants us to understand, the thing is that we have to make sure all those people putting drones with cameras in the air over America’s cities and towns are doing so in a way that doesn’t, you know, result in illegal surveillance.

No, wait. That’s not quite right. That’s what he wants you to hear. What’s he’s actually saying is slightly different.

“We need to integrate unmanned aerial systems into the American psyche in a way that isn’t threatening or scary,” he said, in remarks at the National Press Club. “Many here today have likely recognized that I’m deliberately not using the word ‘drone’ because it carries a stigma.

Ahh. There’s the Vaseline. What we have to do is deploy those drones – excuse me,  unmanned aerial systems – in a way that doesn’t upset folks. The problem isn’t the drones, it’s the people. We don’t need to ban drones, we need to reengineer people’s psyches so that they look up in the sky and see a friend. It’s not like Big Brother at all.

Udall’s solution sounds okay on its face, although we’re not being given anything in the way of specifics. But we can trust him.

Udall is working to update safeguards to protect Americans from being surveilled by private drone operators without their consent, addressing concerns raised by his constituents while helping to head off possible legal problems for an emerging and potentially important industry for Colorado.

The great news is that he has a track record of being an uncompromising privacy watchdog and if history tells us anything, it’s that Congress always refuses to bend and water down legislation in the face of lobbying by big industry interests.

In related news, you may have been reading that the NSA has been routinely collecting our phone records without warrants for several years now. Why do I mention this now?

Intelligence committee member Mark Udall, who has previously warned in broad terms about the scale of government snooping, said: “This sort of widescale surveillance should concern all of us and is the kind of government overreach I’ve said Americans would find shocking.”

Yes. I’ve been worried about illegal government surveillance all along. Which is why I voted to grant blanket immunity to telecoms that helped Bush operate his illegal scheme.

So now BiParticrat Udall wants us to all get warm and fuzzy about those unmanned aerial systems which he’s being careful not call, you know, the “D” word. Kumbayah, bitches. We can trust him to shoot straight and never compromise where our rights are concerned. Just like he always has.

Pass the Vaseline, yo.