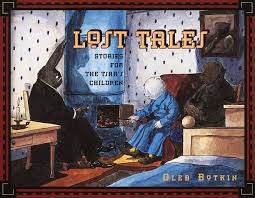 A quick turnaround with the next book from the 2013 reading list. This time I ventured into a new area: picture books. No, I haven’t decided to re-read The Runaway Bunny or The Cat in the Hat (although they’re both very worthy of repeated perusal in their own right – and for the pleasurable memories they’d trigger for me of reading them to my sons when they were wee laddies). The next couple of books on my list are picture books – but really, given their tone and subject matter, picture books for adults. The first of these is the “beautifully horrible, horribly beautiful” collection of illustrated tales done by a teenaged Gleb Botkin for the children of the last Russian Tsar, Nicholas II, called Lost Tales.

Botkin, a sometime playmate of the Romanov children and the son of the Romanov’s personal physician (Dr. Evgeny Botkin – whose deep and personal loyalty to his tsar led to his own death: he was murdered in Ekaterinburg along with the Romanovs) wrote and illustrated the tales (there are two in the book, although both deal with the same subject: counter-revolution and the successful restoration of autocratic monarchy, a subject that, as might be expected, delighted the Tsarevich Alexis and his sisters Grand Duchesses Olga, Tatiana, Maria, and Anastasia) when he was on 17 years of age as diversion for the young Romanovs while they lived in exile in Tobolsk, Siberia.

The stories – and the illustrations that accompany them – deserve to be discussed as separate entities (and indeed, the last part of Lost Tales consists of a group of drawings for which there is no accompanying text). So, to do each credit, it seems best to approach them as different things.

The text of these stories seems to be a mishmash of the sort one might expect from a 17 year-old with fervent loyalties. The story is that of a “child hero” – a young (perhaps 12-13 or so?) “Teddy Bear” named Mishka (a term I have since learned is applied to toy bears in Russia as “Teddy” is applied in the US) who leads his fellow cadets in a takeover of a “bear town” that has fallen under the rule of rebel monkeys. These monkeys have revolted and taken over the government of the monkey kingdom (usurping, as it were, the legitimate monkey ruler who has been captured by enemy forces – who are bears themselves, no less) and are easily defeated because of their continual excessive drinking (after all, anyone who would oppose the autocracy of a “legitimate” monarch must be drunk, right?). Our stalwart hero, who is a monarchist of the first order, liberates the  imprisoned monkey king and restores him to the throne.

For which, of course, he is made a powerful member of the aristocracy.

A second part of the story, incredibly racist in it own naive way, describes the surrender of an island inhabited by – get this – black bears for whom is found a suitable “king” (he’s an “aristocratic” black bear – yikes!) who will submit to the rule of his lighter colored neighbors in return for being the figure head in a cushy puppet regime.

The language in which both stories are described can only be explained as a weird adolescent cross between the language of bedtime stories and overheard political cant from a deposed sovereign speaking privately to trusted friends. Weird, yes – spooky – definitely – accurate – who can say?

These stories are accompanied by watercolor drawings that portray the bears – and monkeys, for that matter – in a most militaristic fashion (Tsar Nicholas himself complimented young Botkin on his accuracy in depicting uniforms) – but the drawings also have a childlike quality that belies a text full of hails of bullets, imprisonments, and the like. The characters, especially Mishka the hero, are drawn with both a fondness that approaches the charming and a militancy that approaches the fanatical.

Except for this detail which bears noting….

The monkey depictions are certainly modeled on monkeys, but there’s more than a hint of Lenin and Trotsky in their delineation. Whether officers loyal to the monarchy or rebels favoring the revolutionaries, the monkeys are made sinister in a way that perhaps even Botkin himself did not realize.

Much could be made by scholars inclined to such studies of the psycho-social elements of Botkin’s watercolors – and of the story itself, which celebrates “divine right of kings” more fondly and troublingly than Botkin, one guesses, would ever have recognized. As much charm and humor as there is in Lost Tales, there is also an undercurrent of anger, fear, and  desire for revenge that would not make this book one Mommies and Daddies would read to their little ones at bed time.

Teddy bears machine-gunning monkeys – even naughty monkeys – is the stuff of nightmares, not sweet dreams.