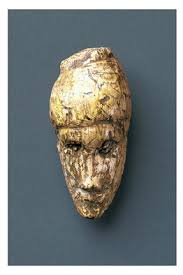 The British Museum’s astonishing exhibit, Ice Age Art: Arrival of the Human Mind, is one of the best shows they’ve had since we’ve been in London. It’s a collection of carvings from the dawn of modern history in Europe, mostly on mammoth or reindeer ivory. The carvings are of a variety of objects—women, mostly, but also animals, and, more recently, abstract designs and even what appear to be maps. The list of superlatives becomes almost boring—the earliest puppet; the oldest known ceramic figure; the earliest known female figure; the earliest known animal carving. Ranging through the show is an astonishing experience. I find myself running out of superlatives to describe the experience.

These objects date back to the various periods of the past several ice ages in Europe, when ice sheets advanced and retreated across the European landscape, transforming it any number of times—most recently, 10,000 years ago, when the most recent retreat created the landscape of modern Europe. And it was during this period that Europe became occupied—and, indeed, re-occupied. We know, for example, the Britain was occupied by humans 40,000 years ago—but was then covered by ice sheets again, with the most recent withdrawal being just 10,000 years ago. We have several inter-glacial periods of human activity to deal with, which is cool. And numerous sites from which to draw—primarily caves in southern Germany, but in reality an arc that ranges from Spain to Siberia. As will always be the case with exhibits of this kind, one wonders how representative what we’ve recovered is of what was actually produced. We probably have no way to know.

But what’s on exhibit here is remarkable, and in some cases breathtaking. Over 100 objects, almost entirely Eurasian, made in a period ranging from 32,000 years ago to 12,000 years ago—as span of 20,000 years, remarkably—are on glorious display. Perhaps most famously, there’s the very famous pregnant woman, carved on mammoth bone, that so fascinated Picasso—the oldest known ceramic figure:

The astonishing Zaraysk Bison, from Siberia, from 20,000 years ago:

Some of these pieces are very small (less than an inch in length) carvings of women or just indistinct figures, or in many cases flying birds, again usually in mammoth ivory. This piece is called The Worshipper—and it’s small! Which raises, if it hasn’t already occurred to you, the issue of what tools were actually used to produce these objects?

And a very small flying bird: 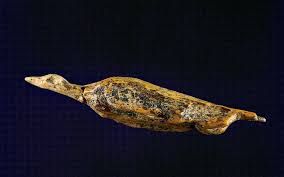 Or, one of my favorites, a thin bone ornament (for which I have no picture, sadly) with a calf on one side, and an adult bull on the other, with a hole in the center—so that it resembles one of those toys that can spin and present an image while spinning. Is this really what this is—or are we, as one is so often tempted to do, simply projecting?

These items were not casual productions. There was clearly technology involved in their creation—knowledge of the appropriate substance to use, and, more importantly, knowledge of the appropriate carving tools in, for example, the creation of bone carved with the pattern of fish scales. This is very fine work, and there was clearly a process in making these items. What tools, exactly, were involved? There’s a lot of guesswork here—animal claws? Very fine flints? We don’t have metal yet, remember.

The organizers have done some very clever things here. First of all, it’s not an overwhelmingly large show, which is often the case here in London—the search for the next megablockbuster art show seems to pervade the cultures of London, Paris and New York to a tiresome extent. The organizers here seem to have wisely avoided that compulsion. And the show itself is nicely organized for viewing—since we’re mostly looking at sculpture, most of the displays are on islands one can walk around. Finally, there are drawings on the wall by 20th century artists who were, as it turns out, mesmerized by this art—Picasso, Matisse, the English artist Victor Passmore, and even some small sculptures of women by Brassai that look, well, “highly influenced” might be a polite way to put it. Picasso, of course, stole shamelessly from this art, as did, it turns out, Matisse. And their art is all the more interesting because of it. All of this makes for one of the most pleasant museum experiences I’ve had for some time.

And like all good exhibitions, it leaves me both highly pleased and a bit uncertain—not because of what’s on display, which is just remarkable, but because of the subtheme that the organizers are using—“Arrival of the Human Mind.” It may very well be that something changed in how humans processed visual information 40,000 years ago. This does not necessarily make it an emergent phenomenon—it simply means that what (some) humans did with their visual processing took on an additional dimension—abstraction. Much is made of the apparent fact that the statues of women became more abstract—indeed, more sexual—as time went on. And indeed this is a critical aspect of human cognition. Is this all sufficient for statements that the creators of these pieces had “the same modern visual brain as our own?” Or, more specifically, “cells that respond specifically to line orientation have evolved to construct complex illustrations from them.” I’m unconvinced. Brian Sewell has the same concerns:

…I am deeply sceptical of interpretations and assertions that none can prove — even the curator informs us that the terminology of the carbon dating that is the science behind this exhibition reveals “gaps and uncertainties”, and that “the chronological trend … lacks precision”. When British Museum director Neil MacGregor himself tells us that we enjoy the innovations of prehistoric artists because “they use the same parameters of expression that every artist has used since … because we all have the same remarkable complex brain …”, the sane man must raise an eyebrow.

There’s no question that these pieces are a significant artistic achievement. But we can’t really know if that was their intent. These pieces obviously had cultural value to their creators, but that’s not the same thing. There was significant enterprise associated with their creation as well—estimates (which appear credible, and not just made up) are that some of these pieces might have required hundreds of hours to create seem about right. So we’re talking of a culture that embodied not only the appreciation of representational something, but also the time required to create these objects.

But, as Sewell points out elsewhere in his astute review, these objects are free-standing. As much as Picasso, Matisse and Brassai were inspired by the rediscovery of prehistoric art,

I have always believed that in the history of art, nothing has come of nothing and that antecedence is inevitable (if only one can find it) — the recent reappearance from the Siberian permafrost of a scrap of carpet 8,000 years old precisely made my point — but I see no evidence of aesthetic continuity between this Ice Age material and the antiquities of Troy and Tassili, China and Catalhuyuk. Perhaps, like the Neanderthals (who, apparently — just to remind you of the caveat — had no aesthetic inclinations), all these Ice Age artistic colonies died out as surely as those of Cornwall and Brittany a century ago.

Does this matter, really? Probably not. This is not a show about prehistoric art as the precursor to everything that followed, so, even though I think Sewell is correct, it’s ok. The point of the show is that these are remarkable artifacts, like the paintings at Lascaux and Altamira, and they tell us something about the people who made them. In particular, they tell us something about how the minds of these people may have worked.

But did this ability to abstract, and then embody that abstraction (to oversimplify), arise in some sort of context-free state? There’s not much discussion here on this point in the exhibit itself—just some assertions about the brain. All the more surprising, then, that there is no reference, in the exhibit, or the well-produced and illustrated companion volume, to the work of Alexander Marshack or others who have looked into prehistoric peoples’ notion of time. Marshack spent several decades as a self-taught archeologist, and made some stunning discoveries, many of which were initially summarized in his book The Roots of Civilization. The most significant of these is probably the first lunar calendar, which involved some interesting research skills on Marshack’s part.

The fundamental lesson of Marshack’s work is that prehistoric man could count, and could devise an accurate calendar of sorts. And the dating on this? About 32,000 years ago, in one of the periods of interglacial warming that punctuated early human history in Europe. And the cognitive abilities on display in Marshack’s studies—computational abilities that seem comparable to those of modern humans—seem as impressive as those on display at the British Museum. And perhaps not too dissimilar either—the kind of abstraction on display in the exhibits seems likely to entail the kind of abstraction required for a notational system described by Marshack. Both involve imagination, after all. There are excellent discussions of some of these issues in New Scientist and The London Review of Books.

In fact, one might argue that these abilities are linked in fundamentally interesting ways. It seems somewhat remarkable, then, the Marshack’s work is not mentioned at all in the exhibit, and barely acknowledged in the otherwise excellent volume that accompanies the exhibit—which is otherwise chock full of broad generalizations about art and the mind. This suggests that the organizers are unfamiliar with the broad thrust of Marshack’s work, which would be unfortunate, or else they don’t find it relevant to discussions of the emergence of the modern mind, which is just bizarre. To state that the critical factor in the emergence of the modern mind was artistic expression, and the cognitive tools that underlay this, is just silly, and seems remarkably ill-informed.

There’s actually more, if one wanted to pursue this deeply. We know that hand axe technology was a critical milestone in human evolution—not just their use, but, just as critically, their manufacture. We know that humans in Africa were engaged in aesthetic activities thousands of years before the works on view here. But what we have here is figurative art for the first time (that we know of). We want to assign a certain level of significance to this—how can we not? But it’s a problematic exercise.

Perhaps I make too much of this. The exhibit is quite wonderful—with such material on display how could it not be? So if I were you, I’d ignore the baggage of the attempts at broad and grand generalizations about the human mind, and just go and savor the pieces on display. They can’t help but stimulate a whole raft of interesting questions. These objects are some of the earliest evidence we have for humans with minds like not unlike ours. But it’s not the only evidence, and it’s speculative to imply that what’s on display here is qualitatively different from what came before. It may be that that’s the case—but we just don’t know. Something hugely interesting happened to humans 30,000 to 40,000 years ago or so. I’m grateful that it did, and that we have at least some legacy of it to marvel at. It may or may not have been art. But it’s certainly something close to it, you feel.

Ice Age Art: Arrival of the Modern Mind is open until 2 June at the British Museum.