Storyline: starting the next chapter 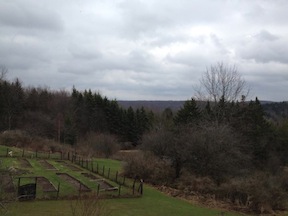 I’m staying in a place called the Sunrise Cabin, but there’s no sunrise—only an uneven cover of clouds that’s getting progressively more translucent as dawn breaks somewhere beyond them. I’m not sure this cabin gets much sunlight, anyway, judging by the layer of algae that slicks the wooden deck. The pines around the cabin must do as good of a job blocking the light as this morning’s clouds.

I’m at a writers’ retreat for part of the weekend at a place called The Mountain in the middle of nowhere. This is the first morning I’ve slept in since, well—since I don’t know when. Even on vacation last month in California, when I attended the Storyline conference, I was up before dawn and out the door every day in order to beat San Diego traffic.

Since then, it’s been an unrelenting barrage of deadlines: review these galleys, check those printer proofs, edit these captions, write that appendix, lay out those pages, edit those photos, review those marketing materials, talk with that writer, approve that dustjacket copy. I’ve had three books making their way through various stages of production, all tied into the upcoming anniversary of a Civil War battle. My publisher wants them out in time to take advantage of the extra foot traffic that’ll march through battlefield bookstores. Life since my return from California has been a full-court press to get everything finalized.

It’s been a good problem to have, for sure. I’m fortunate that my writing career flourishes as it does. The crushing pace has kept me focused, and the intensity has provided a self-fueling adrenaline rush. It has also been usefully distracting.

But I recognize it as such, and it has also kept me from following up on the work I began at the Storyline conference. My purpose for attending, as I’d articulated before going to the conference, was to find a little direction in life. I’d felt adrift since wrapping up my Ph.D. last fall and thought a little life planning, cleverly structured in the guise of a writerly conference, would do just the trick. 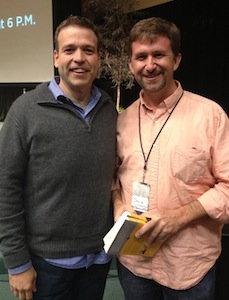 At the conference, organizer Donald Miller, author of the memoir Blue Like Jazz, contended that goals are not enough to get us through life. “I had a list of things I wanted to accomplish by the time I was thirty-five,” Miller said, rattling off such things as “live in Seattle” and “write a New York Times bestseller.” He achieved his goals and found himself wondering, Now what? “I felt unfulfilled,” he said. “I had done all the things on my list and was, like, ‘What’s the point?’”

I’ve wondered if my writing, particularly viewed in the context of storytelling, is my purpose. It’s who I am, what I do. But why?

I put that question to my publisher when he and I got together that same week of the conference. Writing had begun to feel a little purposeless to me. I’ve been writing all these books and articles, but to what larger purpose? Was it—I shuttered to think—nothing more than ego gratification? Was it just self-indulgence? Was I kidding myself to think I was actually doing any kind of greater good?

“Why do you do all this?” I asked him. “Why do you publish all these books?”

Funny I should ask, he said. He’d recently finished reorganizing his library at home, and for the first time, he collected into a single place all the books he’s published. His company, Savas Beatie, is the largest commercial publisher of Civil War-related books, with more than 70 titles in print, but they also do history books of other sorts, too, as well as a smattering of sports books. They have nearly 120 in all.

“And I realized,” he told me, “that I have amassed a significant body of work. Long after I’m gone, that will remain. I will leave that behind. And if that work helps people better understand their past, then I will have done something worthwhile.”

That resonated strongly with me. It articulated a why that made sense to me but that I’d perhaps only felt on an intuitive level. Or maybe I’d known it but had convinced myself it was my own poppycock attempt at self-justification—but to hear someone else put the idea into words made it more real. It made it believable.

I thought I’d try this newfound idea on for size once I got back from the conference. Maybe this would crystalize as the sense of purpose I’d been hoping for. As soon as I returned, though, the tidal wave of work crashed down. No time for reflection. No time for meditation. No time for beers and cigars and good shoot-the-shit conversation.

On the plus side, truth be told, I’ve been too busy to notice any lack of purpose. But any time I’ve been able to come up for breath, that restless, vacuous purposelessness yawned beneath me.

On Friday, I gave final approval to what should be the final set of proofs. The quiet settled over me like a still pond. I went up the Mountain for some time with other writers—then felt strangely compelled to not write. I brought Storyline with me, too, but felt compelled to not start. I felt compelled to think about it so that I could get started soon—but not yet.