Traveling to Istanbul (III)–In the heart of the country?

Thursday started out in a bit of frustration, but turned out okay after all. The plan was to head out by tram to the Naval Museum, then double back to one of the university museums to see a map show, and then wander around the Galata area. The first two were a bust, sadly. First up, the Naval Museum was closed for renovations until July. You would think that this would be noted in the appropriate places. I love maritime museums, and this sounds as if it would be a good one. I remember the one in Barcelona being fantastic. And I was all set to buy a T-shirt too. Maybe next time.

Then we spent, or rather wasted, some time looking for the museum associated with the Mimar Sinan Fine Arts University, where they were having a large map show featuring the Piri Reis map of 1513, the first map to show anything from the Americas. But we kept being told that was closed too, even though the website said the show would run until May. Well, that turned out to be my mistake—I got my museums confused. We did, however, get some nice pictures of Barbarossa’s statue: 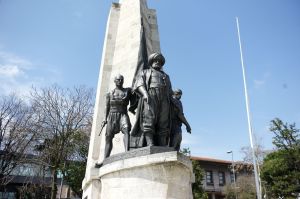 And one with Barley, the travel totem. It’s remarkable how any picture is enhanced by the addition of a small bear: 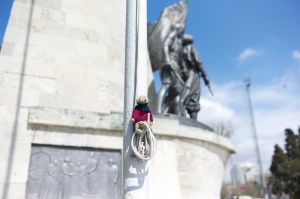 So instead we ended up taking the funicular up to the top of Galata and walking down, great fun in the windy streets. Lunch was some pide at a place recommended by Istanbul Eats, which has turned into our go-to place for real food. It was a lovely day to amble down the hill. Here’s me in my tourist disguise: 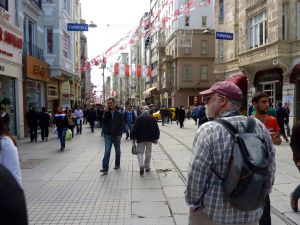 Then a quick tram trip back to the hotel, a dip in the whirlpool for tired muscles, and a late kebab dinner. And I finished re-reading Ian Mcdonald’s wonderful The Dervish House, about Istanbul in 2027—a great book, highly recommended. Although I can’t imagine it was published here—there’s still a certain level of censorship. I can’t get Gawker online, for example—what I get instead is a message in Turkish with a big red X on it, so it’s hard to miss the point. I can just imagine what else I can’t get online. Turkey is one of three finalists for the 2020 Olympics, and I wonder if Internet censorship is a positive or negative screen. It didn’t hurt China’s chances, obviously. The other two finalists are Spain, who is broke now and will probably still be broke by 2020, and Japan, who has had the Olympics about 17 times already, if I remember correctly. Maybe it just seems that way. So I would think Turkey’s chances aren’t bad. This would be the first Olympics in a Muslim country, which would be interesting.

So today we did a couple of smaller museums, both worth the admission. First up was the correct museum for the map show, which was kind of interesting, since the show didn’t actually contain any real maps—just pictures of them. Lovely, large pictures, to be sure, but still—not even the original of the great map that’s the centrepiece of the show. Islamic mapmaking was extraordinary, though—as in so many other areas, principally science and mathematics, they set the standard for a number of centuries.

Then a short walk straight uphill to Orhan Pamuk’s real Museum of Innocence, named after his novel The Museum of Innocence. This was great. If you’re a fan of Joseph Cornell or Barbara Hodgson, this is the museum for you. Pamuk has created, quite attentively and lovingly, various little boxes, each containing found everyday objects that embody each chapter of the book itself. There are 83 chapters, so now you know how many boxes there are. He hasn’t quite got them all filled, but the vast majority are lovingly full of the detritus of daily life, the kind that brings back and preserves memories. Which is what the museum is all about—how we preserve memories, and why we need to do that. Pamuk has written a companion book to the museum—The Innocence of Objects—discussing why and how he put the museum together; it’s been something he’s had in mind for decades, as it turns out.

Pamuk is not the most popular figure in Turkey, irrespective of his Nobel Prize for Literature. Several years ago he was put on trial out in Anatolia somewhere for insulting Turkishness or something, but—to the great relief of the national government—the trial was halted. But he embodies the European side of Turkey, at a time when much of Asian Turkey seems unconvinced of the benefits of being European. Maybe it’s the ease with which Turks seem to deal with each other that suggests a more placid, culturally integrated nation than is really the case. It’s clearly a multi-ethnic culture—you can see this just wandering around. The surprising thing to me is the sheer number, even here in Istanbul, of women wearing scarves, or even the full hijab. And raincoats—women wear raincoats everywhere, including a large number of younger women. Men wear whatever they want, of course.

Turkey still wants to be in the EU, but a number of EU nations remain to be convinced, and you can sort of understand the hesitance. Maybe it’s all those raincoats. As we’ve noted before, the EU has had a host of issues with Poland and Hungary over the past several years, and is still trying to figure out what sort of financial system it needs to have—it’s not clear to me that it’s ready yet for Turkey, or that Turkey is ready for Europe. This is not a new issue, of course—Turkey has been straddling these tensions for centuries. Much of Pamuk’s autobiographical Istanbul: Memories and the City is caught up with this tension. Still, Istanbul was a European Capital of Culture in 2010, along with Essen in Germany and Pécs in Hungary, so they’re making their move.

There’s no question it’s a great walking city—Mrs. W has been having a great time posting her daily shoots. I’ve been a bit remiss, but we’re sharing the laptop—I’m not about to start posting on an iPad Mini. But the location is a photographer’s dream, and there’s a shot anywhere you point your camera at.

Here’s a shot of the interior of the Şehzade Camii, which I believe is my favorite. Like a good cathedral, the larger mosques pull your vision straight up, which is sort of the point. And this is what you’re likely to see: 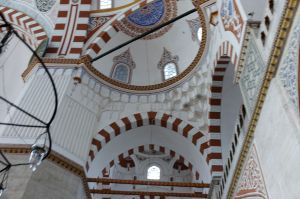 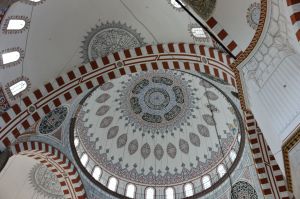 Notice the designs are of three things only—flora, words from the Koran, or geometry. Yet within those constraints, what a riot of variance. Compare the above with the interior of the Blue Mosque: 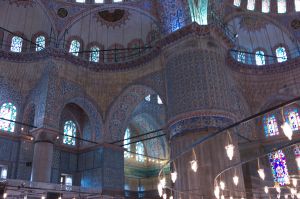 The difference in tone is largely accounted for by the fact that the Blue Mosque interior is all tiles, so the light is different. Here’s the Hagia Sophia at night (taken with the phone, so it’s not great): 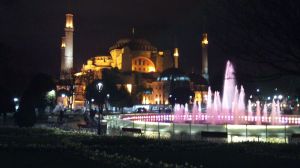 The markets were a hoot—exactly the amalgam of color, aroma and bustle that you would expect. Here’s the Grand Bazaar: 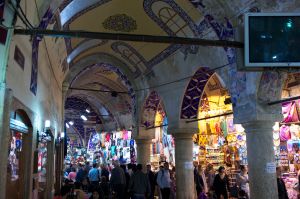 And the Spice Bazaar—where we actually parted with some currency. Some goodies to look forward to upon our return. 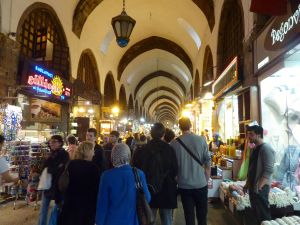 And only one more day, then back to London! Where, I gather, it’s been snowing. Great.