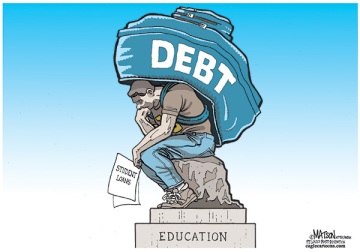 This month, the Urban Institute put out a study called “Lost Generations? Wealth Building Among Young Americans.” In the report, the Institute confirmed what most of Gen X and Gen Y already knew: we’re poor.

“Today, those in Gen X and Gen Y have accumulated less wealth than their parents did at that age 25 years ago. Their average wealth in 2010 was 7 percent below that of those in their 20s and 30s in 1983. Even before the Great Recession, younger Americans were on a strikingly different trajectory. Now stagnant wages, diminishing job opportunities, and lost home values may be merging to paint a vastly different future for Gen X and Gen Y. Despite their relative youth, they may not be able to make up the lost ground. If these generations cannot accumulate wealth, they will be less able to support themselves when they eventually retire. This financial uncertainty could reverberate throughout the economy, since entrepreneurial activity, saving and investment tend to build on a base of confidence and growing wealth.”

Campus Progress put the study into stark perspective with their recent post called “How Student Loans Are Keeping You Out Of The Middle Class,” saying this:

“A new study from the Urban Institute shows just how long those investments can be delayed. Millennials have accumulated less wealth since entering the workforce than their parents did at the same age, even as the economy has grown and the average wealth of Americans has doubled.

The problems that have led to today’s middle-class crisis for borrowers aren’t unknown. Cuts to public funding for higher education have gradually shifted the costs of a college education on to individual students. With scholarship and grant funding limited, students have turned to loans. Escalating tuition combined with stagnating middle-class incomes have made it harder for borrowers to meet their obligations.”

I don’t point to this study and this article to complain. But this is a dangerous economic trend in the workforce, and the economic pressures building up on young people trying to make a life for themselves and their families (or future families) are getting out of hand. And our culture of valuing hard work and “pulling yourself up by your bootstraps” isn’t necessarily helping.

For years, parents and educators tell their children that a good education and a college degree are the ticket to a good job with a good paycheck. I’m not disputing this – there’s plenty of proof that college graduates make more than their colleagues without degrees. But while college graduates will earn more in the long run, they come out of college with a mountain of student loan debt, especially in recent years. And while President Obama made it easier for people to get Pell Grants and attend college, the administration and Congress have not been able to make a substantial dent in the price of a college education – leaving students to take out loans and graduate with an average $27,000 of student loan debt.

Once students graduate, they are faced with two choices. They can continue their education even further with graduate degrees, giving them a better chance of a higher salary in the future, but amassing an even greater amount of debt, or enter a shaky job market in a still-recovering economy.

The first hurdle they’ll hit is the “lack of experience” hamster wheel: employers will tell them they need more experience to get a job, and yet they can’t get a job without experience. A great source of education and experience is the internship, but this brings up the problem of unpaid work post-graduation.

Traditionally, internships for undergrads are unpaid and for college credit – schools require them as part of an “on the job” experience prerequisite for graduation, and it gives students a great resume boost. Post-grad, however, unpaid internships are growing more and more popular amongst employers, and are now being considered the “first job” – forcing students to work for free, with only the vague promise of being hired for a paycheck in the future. And as recent graduates work these jobs, they face grown-up debt with a student paycheck – and that’s an ominous imbalance. From Campus Progress:

“Young adults are in a period when they should be investing in their futures to build the kind of middle class stability that their parents’ generation enjoyed,” Catherine Ruetschlin, a policy analyst at Demos, told Campus Progress. “Instead they are paying down tens of thousands of dollars in college debt, putting those critical investments in their future farther out of reach.” 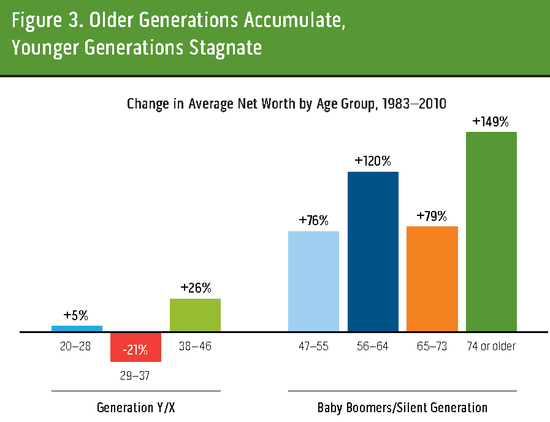 When the students finally do upgrade from unpaid internships to paid jobs, they face the problem of stagnant wages. The New York Times points out stagnation in the country’s wages:

“Wages have fallen to a record low as a share of America’s gross domestic product. Until 1975, wages nearly always accounted for more than 50 percent of the nation’s G.D.P., but last year wages fell to a record low of 43.5 percent. Since 2001, when the wage share was 49 percent, there has been a steep slide.”

I also found that among friends, we face a more cultural problem: being grateful for any job we can get right out of school. We constantly hear that someone is unemployed, or has just been laid off, and that we’re “lucky” to have any job at all – to complain about how your paycheck isn’t enough is considered ungrateful. It’s true, we are lucky to be employed. But that doesn’t mean we should be paid the bare minimum for our work because employers know we’re desperate for jobs.

As a nation, we need to work together to get the cost of education under control – not only so that more people have access to higher education, but so students can financially handle the cost of education before and after graduating. We must reform student loans, compelling banks to offer lower interest rates and more forgiving payment plans so that students earning small paychecks have a hope of repaying them without defaulting or making painful sacrifices to pay them back on time. We must encourage employers and organizations to offer fair compensation for internships and work placement, especially for students who have graduated. And we must urge employers to pay decent wages for good jobs, so that their workers can meet their financial obligations and put money away for their futures.  If we make strides in these areas, our economy can continue to recover – and the Millenials can breathe a little easier when it comes time to pay the bills.