The new Mailbox app for iPhone and iPad: so far, a waste of time 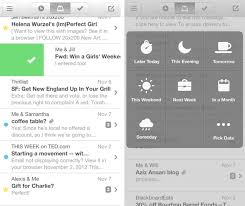 Like many of you, I had been hearing about this new app called Mailbox. The buzz said it was a killer mobile app that was in nearly every respect superior to the default e-mail program in iPhone and iPad. So I went to the App Store and signed up, only to be told that I was in line behind a couple hundred thousand people. Wow, I thought. This must be some hellacious app.

Then, a few days ago, the news broke that Mailbox was being bought by Dropbox.

“Rather than grow Mailbox on our own, we’ve decided to join forces with Dropbox and build it out together,” Mailbox said in a Friday blog post. “To be clear, Mailbox is not going away. The product needs to grow fast, and we believe that joining Dropbox is the best way to make that happen.”

Nice, I thought. Full steam ahead.

It isn’t that the iPhone app is a trainwreck or anything. It’s generally a pretty good way of managing e-mail (and I get a lot of it, using multiple accounts, each day), although there are two issues that need addressing. The first is that it can be difficult adding an account from any ISP other than the big services like Gmail, Hotmail, Yahoo, etc. Like my E Street ISP account – it’s doable, but even with all the info you need in front of you, it isn’t easy, and it’s damned sure not intuitive.

Second, why in the tapdancing motherfuck am I not allowed to “select all” when I want to clean up my goddamned inbox?! It’s like Apple hired a hateful wanker from Microsoft to handle mobile e-mail functionality.

All of which is to say that I wasn’t feeling a desperate need for what I imagined Mailbox would be, but I was interested in taking it for a spin.

Last night I got the message that my Mailbox was ready to set up. So I open the app, follow the instructions to add an account, walk through the little tutorial, etc. And I quickly hit on a problem: Mailbox isn’t an app for handling your e-mail, it’s an app for handling your Gmail. Period. It doesn’t let you add Hotmail or Exchange or Yahoo or AOL (not that you should want to, but that isn’t the point), and it certainly doesn’t let you add accounts from smaller ISPs like E Street.

Mailbox offers users some slick, elegant ideas for managing their Gmail, it’s true, although it mainly seems devoted to letting me do things that I don’t have any interest in doing (like kicking an e-mail over to a special “save for later” queue). May work for you, and by all means check it out, but it’s not the game-changer that all the hype led me to expect.

Even if I loved it, though, it still complicates life because I’d have to use two e-mail apps instead of just one. Oh – and if it lets me select all to clean up the inbox, I haven’t figured out how yet.

If you’ve heard that it’s a Gmail handler with some cool features for arranging and organizing inbound e-mail and you like that idea, then by all means check Mailbox out. If you rely on services other than Gmail, then keep moving. They may let you add other services in future releases, but for now it’s going to be a waste of your time.