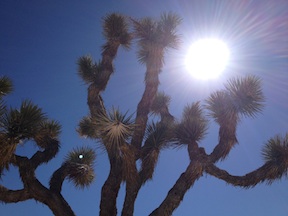 As beautiful as the landscape is as I near Joshua Tree National Park, the picture somehow doesn’t seem complete. Where are Bono, the Edge, Adam Clayton and Larry Mullen, Jr.? Their 1987 album first introduced me to Joshua trees—those desert-stunted twisty trees that look like Dr. Seuss might have drawn them out here in the Mohave. On their album cover, U2 looked so damn cool. I want to hop out of the car and stand in the Seussian landscape and look all badass and gritty and have my photo taken in black and white. I even play the album on my iPod as I drive into the park.

That all changes once I get into the park itself. The squat dusty houses give way to open terrain that awes me. I’m so struck, I pull over only a hundred feet past the gatehouse, get out of the car, and gasp. I literally gasp.

The soil is sun-bleached red and grainy. Rocks dot the land as though shot-putted there by the massive granite formations that dominate the landscape. Some of the formations stand monolithic, singly or in small clusters; others form whole ridgelines that crag off into the distance. In the far, far, far distance, I see snow-capped mountains.

And all around are the Joshua trees. If trees could somehow be reptile, these would be—their trunks studded with scale-like corrugations. The trunks rise and twist, spinning off branches all tufted with spiky Afros. They might even be hundred-fingered jazz hands flashing a “Hey!”

Everything looks interesting, and I start snapping pictures. It doesn’t take long for me to realize, though, that I’m engaged in a losing proposition: if I take pictures of every interesting-looking tree, I’ll be here forever. Or at least all day.

The road winds south into the park, a single ribbon of pavement across something that otherwise looks like a Martian landscape. Smaller roads branch off, but I don’t have the time to explore like I want to. Instead, I content myself with a stop for lunch beside a chunk of granite roughly the size of the Lincoln Memorial, where I eat my salad and study the stone formation—the pasttime of the ancients. I get lost in the granite’s curves and cracks, a small world unto itself. 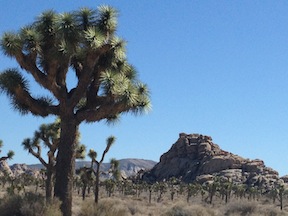 Established in 1934 as Joshua Tree National Monument and elevated to National Park status in 1994, the national park covers nearly 800,000 acres. About 1.3 million people visit each year. Visitation peaks in the spring wildflower season and then tapers off as summer heats up. Then picks up again a bit in the fall. The desert, I’ve been told, is either really hot or really cold. Today, it’s about 60 degrees with a breeze. I’m glad I’ve brought a windbreaker, which is just enough to keep me comfortable.

Down the road a piece, I stop at a place called the Hidden Valley. Here, the granite ridges and boulders have enclosed a protected ecosystem. Mere months before the land was preserved by the Park Service, a cattle rustler blasted a pathway into the valley; tourists have dutifully trekked in ever since. Hardly hidden any more. But the nature trail is well marked, and interpretive signs do a good job explaining the unique ecology of the valley, which partially preserves a relic population of pinyon pines and junipers. Once upon a time—about 10,000 years ago or so—the Mohave had been a woodland forest. Now, only small upper-elevation pockets remain, where there is enough moisture to sustain the trees. There are also a lot of yucca plants, although the Joshua trees have mostly stayed outside. 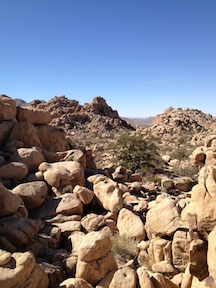 I see several bird species I don’t recognize—which isn’t saying much since I don’t recognize most bird species—and signs talk of jackrabbits and coyotes and lizards. “Be careful where you put your hands when you’re climbing,” one sign cautions. “Snakes like to cool themselves in the shaded cracks of the rocks.”

I find a high perch that erosion has carved into a bowl shape that, coincidentally, just fits my butt. It’s like a little granite recliner that lets me comfortably lean back and look down across the valley. The sun blazes a slow arc across the blue dome of sky. I allow myself to just be.

“Have you found what you’re looking for?” a friend will later ask me on Facebook. “No,” I’ll reply. “Because the streets have no names.” Oh, we’ll think we’re so clever with our U2 references—although, in fairness, it was one of the monumental albums of our teen years. That was our Joshua Tree National Monument.

By the time I get up to leave, shadows have crept slow paths across the valley’s pebbly floor. The narrow foot trail winds between close boulders before spitting me back out to the parking lot, where I’m treated to a vista of Joshua trees springing from the landscape as far as I can see. In a different time and place, it might have the appearance of an apple orchard gone a little wild. Maybe the trees even look a little automatonic—desert sentries with crazy spiked hair and Madonna-like “Vogue” poses.

Back on the road, I wind through more rock formations, places with names like “Hall of Horrors” and “Skull Rock.” I reach a “Y” whose southward branch would take me some thirty miles to Cottonwood and Palm Springs beyond, but I branch north. The Joshua trees thin out, then vanish almost completely. The desert here looks even more rocky, more Martian, with speckles of some kind of scrub brush. The road takes me out of the park. 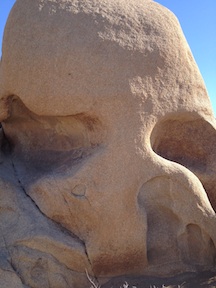 Beyond, the road descends in a long, straight arrow toward 29 Palms. I thumb the wheel on my iPod to bring up Robert Plant’s song. “I feel the heat of your desert heart,” he sings. All these years, I had no idea the song was referring to a real town.

But it’s U2 that I’ll still take home with me in some weird way, disconnected as the album will now be from my real-life experience with Joshua Tree. Rather than U2, I’m more likely to see the Lorax amidst these trees.  But as the song goes, I have been in God’s country: “Dream beneath the desert sky…. We need new dreams tonight.”