Remember Richard Jewell? He was accused of placing a bomb in Atlanta’s Centennial Park during the 1996 Olympics. He endured a horrific trial (and conviction) by media and had his life destroyed. Turned out he was innocent. The guilty party was anti-abortion terrorist Eric Rudolph. Jewell sued several media outlets (including CNN), reaching settlements in all cases save one (which was dismissed after his death).

Now, let’s say that you’re surfing CNN this morning and you come across an item where they report that Richard Jewell was the Olympic Park bomber. What would you make of that? What conclusions would you draw about the credibility of an organization that reported as fact something that has long been disproven?

Well, something painfully similar is happening on CNN.com right now. The story, entitled “Ramseys’ attorney: Grand jury ‘likely confused’ about JonBenet,” centers on the revelation that the grand jury in the infamous Ramsey case wanted to indict her parents, John and Patsy.

The malpractice occurs in paragraph 24:

Investigators didn’t find footprints in the snow outside the home, there was no sign of forced entry.

Another, key story emerged in March 1997 when it was reported that police found it curious that there were “no footprints in the snow,” around the house. The implication was obvious, and intended: no footprints, no intruder. The slight problem with this, as law enforcement knew and the crime scene photos from December 26 make clear, was that there was little or no snow around the house.

These facts have been long established. In addition, the “no sign of forced entry” meme has been dismissed. There was, in fact, an unlocked basement window and Lou Smit, who had established himself as Colorado’s premier murder investigator, demonstrates how easily an intruder could have gotten in. Watch the video, and there’s more here.

And yet, here are CNN reporters Carma Hassan and Greg Botelho parroting long-dead fictions as though they were fact.

FOX takes a beating for its “news” coverage, and rightly so. Not only have they helped pioneer a new age of post-truth “journalism,” they’ve actually gone to court and argued that it’s okay for them to lie.

The attorneys for Fox, owned by media baron Rupert Murdoch, successfully argued the First Amendment gives broadcasters the right to lie or deliberately distort news reports on the public airwaves.

Better yet, the court agreed with them. Yay for America.

But FOX hardly invented cynical news entertainment. CNN has been in the business of “shaping” stories into ratings-generating narratives for a long time. For instance, remember Elian Gonzales? Before April 22, 2000, CNN.com had been my home page. After that I killed it and probably haven’t been back ten times since.

Why? When the federal authorities broke in to take the kid, AP photographer Alan Diaz took a famous picture. CNN posted it along with their story. Here’s that picture.

I checked back a few minutes later, though, and something had changed. See if you can spot what happened. 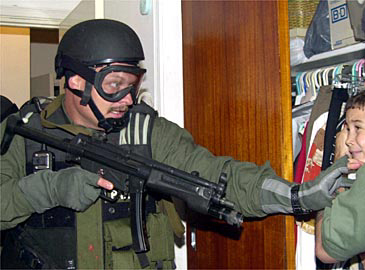 This was a deliberate editorial decision that served no legitimate journalistic purpose. However, it served the purposes of entertainment and marketing quite enthusiastically.

If it hadn’t been clear before, that was the day the facade came down and CNN revealed that they were not a news organization, they were a news-like entertainment product organization. Newz-Whiz®, if you will. It was the day that anyone who cared about being told the truth walked away and never came back.

So today’s little one-sentence transgression against journalistic competence and ethics is hardly anything new or surprising, although it is a reminder of how shoddy the standards are at the place that invented the 24/7 news entertainment cycle.

I would say America deserves better, but how can I until we start demanding better?