Standing on the Equator, I’m as centered as I’ve felt during my entire journey. A few feet to my left, in the Northern Hemisphere, there’s a sign that says “Did you know?” with a shallow bowl that drains into a bucket. In the Southern Hemisphere: same thing. Did you know, in the north, water drains into the bucket by spinning clockwise; in the south, it drains by spinning counterclockwise. Me—I’m just spinning.

After nearly two weeks in Uganda, we’re taking our leave. On our way back north to Kampala, we make the obligatory tourist stop at the Equator and its string of shops. On the west side of the road, they’re more refined, more spacious, more expensive; on the east side of the road, the shops look poorer and maybe, to the uninitiated, a little sketchy, but the prices are better. Knowing how to speak Luganda helps improve bargaining power, but since I know only oli otya—which means “hello”—I need Herman to help me strike deals.

For the first time, we’re not the only mazungko around. This is, after all, a tourist spot, and several outfitters have stopped with tour groups ranging in size from one Australian to a dozen Southern Baptists. I assume nothing about their journeys or itineraries, but I hope they get to see as much of daily Uganda as I’ve been able to.

“I know this is just everyday life to you,” I’d said to Herman yesterday morning as we walked through town, “but it’s so different from my own experience of everyday life.” I had just marveled at a street-cleaning crew shoveling rubbish from the gutters alongside road. They scooped the garbage into a cart pulled by a tractor that looked like an early-30s Dust Bowl refugee. The antiquated technology, the type of manual labor, the sheer amount of rubbish was all SO far removed from anything I see at home–and that was just the latest in a cavalcade of impressions that had jumped out at me since arrival.

Challenges it, too. Coming here with an open mind and healthy sense of wonder has opened some great internal horizons for me–and yet it’s also helped me feel more grounded than I’ve felt in a long while. More centered. I wouldn’t say that I’ve found everyday life here profound, but I do recognize that it has impacted me profoundly, in ways I’m only beginning to intuit.

That night, the students at the Bethlehem School saw us off with a party similar to the opening celebration they threw in our honor: songs, traditional dance, drums. This party had a lot more crying, though. At first, I thought it was stage crying, but the tears flowed freely. 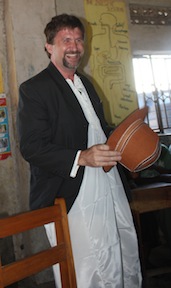 As part of the ceremony, the kids presented each of us with gifts. The ladies got baskets and I received a kanzu, a traditional formal ware for Ugandan men. It looks like a cream-colored dress with a stitching of maroon down the breastbone; with the charcoal sports coat that comes with it, the outfit looks sharp. I also get a hat, too small, made of bark cloth, which comes from the bark of a kind of fig tree.

“That’s the first time in the history of the program that they’ve ever given a man in the group a kanzu,” Deb tells me. “You must’ve been a really big hit this week!” Hit or not, I feel deeply honored and am visibly delighted. I wear the outfit out to dinner, and people light up when they see me. “You look smart!” they say, over and over.

The drive from Kyotera to Kampala—with our stop at the Equator—takes us into mid-afternoon. We do a little sight-seeing in the capital, then we meet some friends for a farewell. In the courtyard of the hotel where we meet, a wedding reception is underway. Guests have seated themselves beneath a big tent, kids are getting designs painted on their faces, and music swells from a pair of oversized speakers. From the paving-stone driveway next to the courtyard, I can see out across the manmade lake I admired on my first morning here. Mengo Hill, with the king’s palace atop, rises on the lake’s far side. To my right and a little behind me, the setting sun casts soft light against the peaks of the tall cumulus clouds that hover over the palace and hill.

Without even realizing it ahead of time, this is what I had come to Uganda to find.

In the background, Celine Dion sings something about love coming to those who believe it: “And that’s the way it is.” The song fades. The sun dips away. The moment ends. I can leave my ghosts behind me.

Soon, it’s off to the airport in Entebbe. We leave early because of the notoriously bad congestion and the single snarl-prone road. Better to sit at the airport for hours and wait for the plane than to miss it because we cut the drive too close and then got fouled by traffic.

I leave Uganda, then, as when I arrived: a land cast in darkness, peopled with shadows. With hardly any streetlights or exterior lighting on the storefronts, the gloaming feels thick. “Dark Continent” is not a metaphor.

Yet Africa can mean many things to many people, and its “Dark Continent” reputation is very much a part of that in the same way that, say, Abraham Lincoln represents different things to different people. We myth-make all the time, for all sorts of reasons—and when it comes to Africa, that mythmaking has been going on for centuries. “Africa the place,” says author Andrew Rice, “is forever obscured by the shadow of Africa the notion.”

But of course, “Africa” and “Uganda” are not synonymous any more than what I’ve seen of everyday life might stand in as typical of every Ugandan’s everyday life. I’ve been privileged to have been given a sliver of a glimpse, and for now, that’s perfectly enough.

And I can’t wait to come back.