Final words, written in shit: “I never for my husband was killed….”

Scrawled on concrete, marred by blood: “Cry far help me the dead.”

The lost voices of 300,000 dead, forgotten beneath the earth.

These are Idi Amin’s torture chambers—five concrete bunkers burrowed into the mountainside beneath Mengo Palace in Kampala. Amin, the notorious dictator who ruled Uganda from 1971-1979, is thought to have killed as many as 500,000 political dissidents during his time in power. This was his favorite place for killing—these five ten-by-ten rooms. Bloody handprints still hold up the walls and try to hold back the shadows.

The Israeli engineers who built the chambers thought they were building bunkers for ammunition storage. When they finished their work, Amin booted them from the country and turned their well-engineered handiwork toward its more sinister purpose.

Ask most Americans what they know about Uganda and they’re apt to answer, if anything: “Idi Amin.” I was too young to actually remember him, but his name haunts Africa like a uniformed boogeyman, bedecked with a fruit-salad of medals pinned to the left breast of his jacket.

If the Rwandan Genocide Memorial presented me earlier in the this trip with anonymous slaughter on the scale of hundreds of thousands, Amin offers a single, charismatic face for such carnage.

Amin salutes the body of the Bugangan king, which he had returned from exile for burial–a move that made Amin widely popular among many of his countrymen.

Andrew Rice, author of a book about Uganda’s turbulent modern history, The Teeth May Smile But the Heart Does Not Forget, says Amin had an intuitive feel for populist politics. Particularly in his earliest days, that man Amin a powerful cult of personality. “In that first brief flush of power, Idi Amin was more popular than any leader of Uganda before or since,” Rice says.

Amin behaved more erratically as time passed, though—although Rice and others suggest that Amin was crazy like a fox. Even after deposed, he managed to slide his way into comfortable exile in Saudi Arabia, where he lived unmolested until his 2003 death.

As a historian, I’ve been interested on this trip in somehow coming into contact with Amin’s story. I wrestle to understand my curiosity. I grope for insight.

What I find are the torture chambers beneath the palace.

The palace itself sits atop the highest of Kampala’s hills and had served as the traditional home of the King of Buganda, whose tribe makes up the largest ethnic group in the country. The building was destroyed in 1966 during civil war—shelled by Amin in his capacity as an army colonel at the time, ironically—and was rebuilt only recently as a tourist attraction.

Five years later, when Amin seized power, he used the site as his base of military operations—and the site of his most notorious tortures.

A grassy ramp leads down into the hillside, where it ends at the lip of a concrete tunnel cut into the earth. Electrified metal doors once hung here on heavy hinges. The tunnel once held three feet of water—also electrified—and five doorways offer access to the cells themselves. The crush of bodies in those cells had been such that people asphyxiated to death. At other times, they were shot or bludgeoned to death with hammers. Some were fed to crocodiles.

A pile of muddy rubble spills into the tunnel, and water still pools on the floor. We have to balance from rock to rock, careful not to slip on their muddy surfaces, as we plunge into the gloom.

Our guide has been unusually chipper up until now, and he helpfully directs people up a ladder into the far cell for a closer look. I’ve not made it that far, though. I’ve been stopped still by the words written in shit, scrawled between two cells. “I never….”

This is everything I’d imagine the set of a horror movie to be: dark, dank, filthy. Our voices echo from wall to concrete wall until they haunt the air like the spirits of the dead, who have no voices of their own—only shit and blood and fear and darkness.

The heart can be dark indeed. 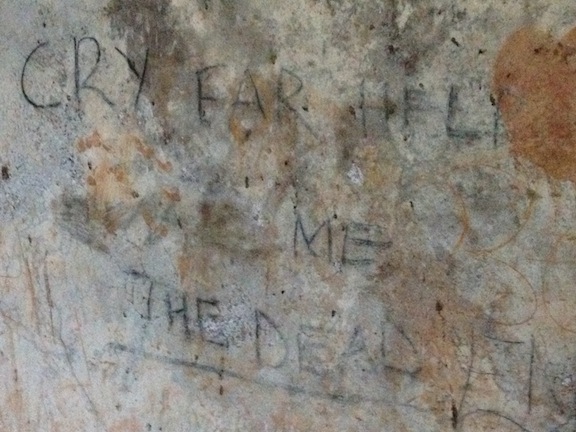