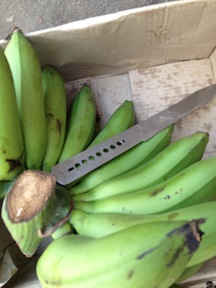 Because he’s back home from secondary school for the holiday, Simon is in charge of the kitchen at the Bethlehem School this month. Although only seventeen, he’s easily one of the best cooks whose food I’ve ever eaten. “In Uganda, it’s considered a disgrace for a man to cook unless he trains to be a chef,” he tells me.

“I love to cook,” Simon admits.

Simon’s kitchen is a mud brick hut with a metal rook and two small cookfires crackling away on the dirt floor in one corner. In the opposite corner, two tables give him room to lay out his diced peppers, sliced tomatoes, a bowl of beans soaking in water, and several banana leaves each larger than a sheet of newspaper.

Outside there’s a room-sized pavilion where he can build larger fires for larger cooking projects. Several other secondary school kids home for the break are out there now, roasting ears of maize to snack on, but when the kitchen is going full-swing during the school year, it feeds six-hundred kids a day: porridge for breakfast and pasho and beans or pasho and matooke for dinner.

It’s the matooke that’s brought me to Simon’s kitchen today. Matooke, also spelled “matoke,” is basically a thick mush made of plantain bananas, and it’s the staple food of Uganda. Although high in calorie content, matooke is a great source of potassium, and I’m told it’s fairly nutritious. Most importantly in a country where life can be little above subsistence, matooke is extremely filling. I’ve asked Simon to teach me to make it. 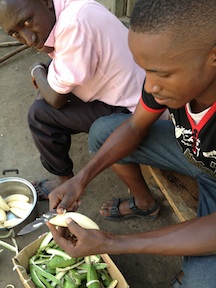 We sit outside the kitchen on a bench with a box of the green bananas on the ground in front of us. Forget the easy-peel Cavendish—the supermarket banana most Americans and Europeans are familiar with—these plantains mean business. The peels don’t just slip off. Simon cuts off the top end with a knife and then runs the knife back toward him to cut the peel away. With several quick knife strokes, he strips away the peel, the slices of skin falling back into the box. He drops the peeled fruit into a pot and then grabs another unpeeled plantain. The process takes on the rhythm of a private peeling potatoes, although Simon does it with good humor.

“It gets sticky,” he says. Banana sap is notoriously thick and gooey. He shows me the build-up on his fingers as he goes. He’ll need kerosene to clean it off his hands and knife when he’s finished.

It takes about ten minutes to peel the fifteen bananas. As the peels pile up, Simon lifts the box and shakes it like a sand sifter, and the few unpeeled fruit rise to the top.

He rinses the banana, and then fills the pan with enough water to cover them, then wraps a banana leaf over the top of the pan and sets it on one of the cookfires to simmer for half an hour. While they cook, he works on a sauce for the beans he’s making, mixing diced peppers, onions, and tomatoes. “I add salt to break up the tomatoes,” he tells me, as though divulging his secret recipe.

The plantains absorb the water as they cook, and when we pull them off the fire, they’ve turned yellow and mushy. One of Simon’s assistants, Nmutale, wets his hands to cool them, then begins to knead the banana leaves that cover the cooked plantains, mashing them to pulp. “He’s kneeling as he prepares the food,” Simon points out. “In Ugandan culture, we believe it’s important to respect the food, so that’s why we kneel.”

Every few seconds, Nmutale dips his hands again to cool them, then continues kneading. When he finishes, he scoops the mash from the saucepan into a banana-leaf-lined basket. He then folds the leaves in on themselves, wrapping the mash into a volleyball-sized globe. Who knew it took so banana leaves—let alone bananas—to make this stuff; there’ll be no way I can make it at home.

As Nmutale mashed, Simon has taken some of the thick central veins from other leaves and coiled them, then set them in the saucepan. He’s also added some water to the bottom, and then lines it all with more banana leaves. The coils keeps the leaf ball out of the water and will allow the pot to act like a steamer once Simon sets it back on the fire. 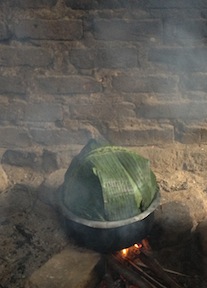 While all that’s been going on, Simon has had me washing slices of cassava root and pumpkin. Nmutale sets the wrapped mash in the pot, and I place the washed vegetables around it. Simon folds up the leaves into a tidy package looks almost like a cabbage. It will slow-steam like that to stay warm until ready to serve.

By the time we all sit down for lunch, another hour has passed. The matooke arrives still wrapped in the banana leaves. People lift a flap of leaf like a game of peek-a-boo and scoop off big gobs. It’s yellow by now, and tiny, tiny black dots—banana seeds—are visible throughout. People eat it plain, although I’m still experimenting with a way to make it taste palatable. Heaps of salt might help, but that’s no good (and not really available), so I’ve tried mixing it with ground nuts (which look like hideous purple baby puke but taste sweet), beans, goat soup, and beef soup. So far, nothing’s helping. “It’s an acquired taste,” Deb admits.

I’ve been trying for ten days and haven’t acquired a taste for it yet. I’ll keep trying.