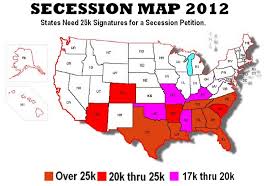 Well, this is certainly disappointing. All those people who signed all those petitions for secession on the White House website are going to be like soooo annoyed. I mean, what’s the point of petitioning for secession rights for South Carolina, North Carolina, Alabama, Tennessee, Georgia, Florida, Texas, and Louisiana if White House is just going to blow you off? I even signed the one for Texas, and I don‘t even live there. Here’s the White House response. Notice that it’s full of namby-pamby happy talk about getting engaged and working together to solve our problems. What’s that all about? And where was Mississippi while this was going on? Someone slipped up there.

Meanwhile, the lead story in The New York Times for much of the day today was about the soaring rate of gun sales in America since Obama’s re-election, driven by the usual tin-foil hat paranoia that Obama’s black helicopters are going to break down your front door and take away everyone’s slingshots or something. Why will I not be surprised if it turns out that these soaring gun sales come from those states that want to, you know, secede? Just saying. It’s not like they’re not already armed to the teeth, but you never know. Honestly, if you want to take your semi-automatic hunting rifles and go home, don’t let us stop you. Wait, it’s the White House that’s stopping you. Where’s Mitt Romney when you need him?

Honestly, you have to laugh. People really thought that a petition to the White House to let South Carolina secede would lead to…what, exactly? Secession? And then what? The state with one of the lowest literacy rates and highest violent crime rates in the United States is somehow going to manage to surive as an independent country? On what? Abandoned military bases?  We’ve been over this ground before. It won’t work—those states, with the possible exception of Texas and Florida, are all dirt poor, and can’t possibly afford to support themselves. The amount of magical thinking here is astonishing, but we should be used to that there days. What do these places have going for them aside from college football and right to work laws? I suppose they could set up a football league to rival the NFL, but I suspect it would look more like the CFL. Still, points for trying.

Oh, and you know what else? The White House won’t support construction of the Death Star either. Something about “The Administration does not support blowing up planets,” and it costing about $850,000,000,000,000,000. Typical of the Democrats to wuss out. Thank god Paul Ryan is already looking presidential.

Update (January 16)–The White House, obviously fed up with having to treat crap like this seriously, has raised the signature threshold from 25,000 to 100,000 for a response.