Uganda Journal: the safari (part one of two) 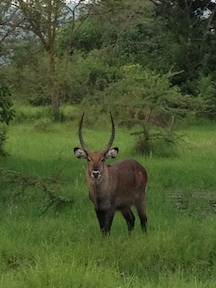 The colonial King of Ankole, Omugabe, loved his impala. The capital of Uganda, Kampala, had been named for the graceful antelopes—but the growing population in the city began to squeeze the impala out of their habitat, and they were being hunted relentlessly. The king knew he had to protect the impala he so dearly loved. So, he gathered them together and moved them to the west, to an area now known as the Lake Mburo National Park, and there they still dwell today—the only place in Uganda where people can see them.

That’s the folk story as Herman tells it, anyway. The impala at Lake Mburo are plentiful, grazing in small herds of a dozen or so. They all have black stripes on the back creases of their hind legs and tail that spells out “M,” and the males have lyre-shaped horns that twist like thin tornados as they grow. They have eyes easy to get lost in; as near to the impalas as Herman is able to get us, we have the opportunity for a long, close look.

Herman has brought us to the park for a daylong safari to show off not only some of the most splendid animals on the continent but also to show off his skills as a guide. He’s starting up a new eco-tourism company, Green Pearl Tours—Uganda is the Pearl of Africa, and “green” denotes the eco-angle—and one of the reasons I’m in Uganda is to work with my colleague, Pauline, to provide business planning and marketing help to Herman for his start-up.

“We need to conserve the environment for future generations,” Herman says. “The country is very green. It shows there is life.”

That’s certainly true here at Lake Mburo. Life abounds. Outside the park, so much of the countryside is used for farming and cattle herding; those agricultural uses take up former animal habitat, and those cattle compete directly with zebras for grazing range. Here, the zebras roam as freely as the impala. “It’s the only place in Uganda you can see these animals, impala and zebra,” Herman says. It’s one of the things he likes most about the park—that and its good climate and its relative proximity to Kampala, some three and half hours away.

For those reasons, Herman chose to do his internship here while studying in a travel and tourism program while at university. The park, established in 1983, is one of ten in the country, most of which are clustered in the western part of Uganda. 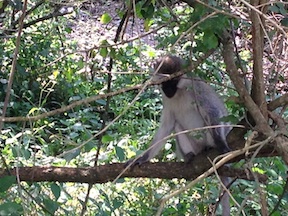 When we show up, the workers at the Sanga Gatehouse welcome Herman like an old friend. A maintenance crew, installing solar panels to provide power for the facility, has taken their lunch break and are feeding scraps of sandwiches to the vervet monkeys in the trees that line the path to the outhouse. The monkeys, gray-furred and black-faced, typically travel in family groups of twenty or so.

We have an appointment for a boat ride on the lake, but as we head in that direction, Herman patiently stops now and then so we can gawk at warthogs and bushbuck and crested cranes. You’d think a vanload of mazungku had never seen animals before.

“Let me tell you the story of the lake,” Herman tells us at one point. Two brothers, Kigarama and Mburo, once lived in the valley. Kigarama dreamed that the valley would flood and so urged his brother to move with him into the hills. Mburo ignored him. When the flood came, Mburo drowned. And so the lake is named for him and the hills are named for Kigarama.

Near the boat dock, a half a dozen warthogs graze on bended knees. “When they eat, it looks like they are crying,” Herman tells us. “There’s a hormone at works that causes their eyes water.” The warthogs have become so acclimated to humans that they pay us no heed. As we wait for the boat, the largest boar grazes within six feet of me before deciding to act spooked. He “whufs” and takes an angry jump in my direction as a warning. “Woa, big fella!” I tell him as I back off, looking at tusks that could easily disembowel me. “You’re the one who came into my space.” I don’t mind being the one who retreats, though.

Herman has cooked lunch for us: homemade samosa, which are like perogies filled with vegetables, and chipati, a kind of fried flatbread. He’s also made fresh passionfruit juice from a special recipe. When we’re done, he sends us out on the boat.