Playing with pain: RGIII and the challenge of The Sport Ethic 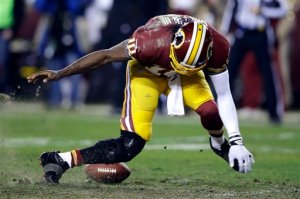 It’s not often you get to see one of your research interests play out in real-time. But last night, during the Seahawks-Redskins playoff game, we saw The Sport Ethic clearly illustrated.

Quick refresher: The Sport Ethic is a concept from sports sociology (Hughes & Coakely, 1991) in which they found four traits that elite athletes believe. One of them is accepting risks and playing through pain. The point of The Sport Ethic is that elite athletes are so dedicated to it, believing in it with an almost religious intensity, that it leads to what the sociologists call Deviant Overconformity. They conform so much to this ethic that it leads them to deviant behavior. Like using performance-enhancing drugs. Like eliminating everything from their lives that doesn’t revolve around sports.

“I’d probably been right back out there on the field. You respect authority and I respect coach Shanahan but at the same time you have to step up and be a man sometimes.There was no way I was coming out of the game,” Griffin said. “It’s an awkward conversation you never want to have with a head coach. You don’t want him to ever feel like you’re lying to him. I wasn’t lying to him, I was able to play. Period. If he would have pulled me out, I would have been highly upset but that’s his prerogative. He kept me in.” – Robert Griffin III, Sunday night (quote courtesy Pro Football Talk).

One of the things that interests me is how the sports media portrays and reinforces The Sport Ethic as normal, desirable behavior. I’ve only done one pilot study so far, but what that study suggested is that the media reflect the Sport Ethic mainly by giving it a voice. The Sport Ethic is primarily reflected in quotes from players and coaches, rather than in the coverage itself (subject to change with future research).

But think about this: Think about what the coverage would have been like had RGIII stayed in the game and the Redskins had won?

Would the coverage have been as critical for allowing an injured player to continue?

Or would he be lionized for playing through pain, playing while injured, putting his team ahead of himself?

What Griffin’s quote from after the game shows (and what Dan Wetzel so brilliantly points out) is how deeply RGIII has apparently accepted The Sport Ethic as a part of his life.

It also shows, to me, one of the big challenges facing sports in 2013. The culture around sports is changing, with more attention being paid to the long-term physical toll sports like football and hockey are taking on players. Look no further than the concussion debate. Player safety is important. But one of the challenges facing it is the fact that the culture of sports is at odds with a culture of playing safety.

Mike Silver raised this point in his Yahoo column today:

“Before you rail against Redskins coach Mike Shanahan for allowing Griffin to play through obvious knee discomfort and exposing him to a potentially serious injury, ask yourself how you reacted when Chicago Bears quarterback Jay Cutler left the 2010 NFC championship game with what turned out to be a torn medial collateral ligament. Did you question Cutler’s toughness? Did you feel like he let down his teammates in that home defeat to the Packers? Did you laud him for being honest with coach Lovie Smith about his condition, for realizing that playing hurt might negatively impact his team’s chances, and for not putting the Bears’ team doctors in a potentially compromising position? Think about the answers to these questions, and then decide how you feel about RG3 and the Battle of Wounded Knee.”

What was interesting about the Cutler story last year was the fact that it was fellow players who started the issue by criticizing the QB on Twitter. That’s how deep the Sport Ethic runs in the sports culture. And trying to change a culture that is so ingrained and pervasive is not easy.

And when reporters value players’ opinions because they are the experts in their field (journalism routines’ research has consistently shown that the media favor official sources because of their perceived expertise), that culture will continue to be reflected in sports media.

Which makes the debate over player safety all the more challenging.

Brian Moritz is a doctoral student at Syracuse University and blogs at Sports Media Guy, where this post first appeared.